The history of Nazi Germany and the Holocaust is bleak, a seemingly unrelenting litany of miseries. The Nazi regime and its collaborators murdered roughly six million Jews as well as hundreds of thousands of Sinti and Roma on the basis of their race. Gays and lesbians, Jehovah’s Witnesses, Afro-Germans, and those the regime deemed physically and/or mentally handicapped were also subjected to unspeakable cruelties. As the horrors unfolded, very few Germans raised their voices to protest the brutality. For some, this was due at least in part to fear of the dire recriminations that could result from speaking out. Others simply lacked real sympathy for Jews and others who already lived on the margins of German society. Because opposition and outright resistance to the regime were so rare, we have come to know many of the opponents and resisters by name: Sophie Scholl, Martin Niemöller, Dietrich Bonhoeffer, Claus von Stauffenberg. 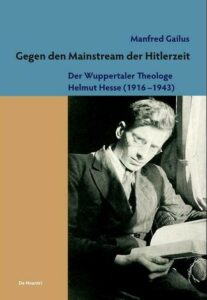 Yet, over the past few decades, scholars like Eberhard Röhm and Jörg Thierfelder, Manfred Gailus, and Gerhard Lindemann – whose body of work together generally affirms the consensus view that the German Protestant Church as a whole did very little to resist Nazism or to speak out publicly on behalf of the victims of the Shoah – have published works highlighting the exploits of individual Protestants who, to use Bonhoeffer’s phrase “[fell] into the spokes of the wheel.” These courageous Protestants include not only Niemöller and Bonhoeffer, but also Elisabeth Schmitz and Katharina Staritz. In Gegen the Mainstream der Hitlerzeit, Manfred Gailus offers a concise but nuanced biography of another such lesser-known Protestant “martyr,” the Wuppertal theologian Helmut Hesse. Because we have already published excerpts of Gegen den Mainstream der Hitlerzeit here, this review will focus on some of the book’s important contributions rather than a detailed summary of its subject’s life. Even so, a sketch of his biography is in order.

Helmut Hesse was born in Elberfeld (now Wuppertal) in 1916, the youngest son of the well-known Reformed theologian Hermann Albert Hesse. Helmut had three brothers and a sister (10, 15). Beginning in 1935, he undertook theological studies, which included several stints at an illegal Confessing Church seminary in Elberfeld, the University of Halle on the Saale, a winter term at an illegal Confessing Church seminary in Berlin, and, for two semesters, under Karl Barth at Basel (17-18).

In Sunday worship services on May 23, 1943 and again on June 6, Helmut prayed for persecuted Jews, read the names of detained Christians (including Niemöller and Heinrich Grüber, leader of the “Büro Grüber,”), criticized Protestant church politics and attitudes within the Confessing Church, and called for the church to resist antisemitism (49-50). On June 8, Helmut and his father Hermann Albert, were arrested by the Wuppertal Gestapo and imprisoned in Barmen, where they languished for over five months (57). On November 14, father and son were transferred to the Dachau concentration camp. Just ten days later, Helmut, having been denied essential medications for a previously diagnosed chronic renal insufficiency, died of post angina septicemia. He was just 27 years old (62-63). Gailus’s fascinating biography paints the picture of a rather cantankerous if principled and courageous young theologian who, for his public advocacy for Jews and persecuted Christians, paid with his life.

In his June 6 sermon in Elberfeld, Hesse, who had addressed ill-treatment of Jews by “Christian peoples” in a February sermon, addressed the matter of Jews and Judaism directly. He quotes liberally a petition about the church’s position on the persecution of Jews (54). The letter had been written to Bavarian bishop Hans Meiser by Ebersbach pastor Hermann Diem and some members of the Lempp Circle, a small group of men and women committed to the theology of the Confessing Church and opposed to the policies of the “intact” Bavarian Protestant church.[1] Bishop Meiser did not make it public, but passed it on to the Württemberg Bishop Theophil Wurm, who similarly refused to publish it (54).

As recorded by the Wuppertal Gestapo, Hesse proclaimed:

As Christians, we can no longer bear the fact that the Church in Germany is silent about the persecution of the Jews. What drives us to do so is the simple commandment of Nächstenliebe (love of neighbor). The Jewish question is a Protestant question and not a political one. The Church must resist any antisemitism in the community. To the state, the Church must testify to the importance of Israel in the history of salvation and resist any attempt to destroy Judaism. Every non-Aryan, whether Jew or Christian, has fallen under the murderers in Germany today. (55).

Hesse’s stark pronouncement closely mirrors some of the language in the Munich petition.[2] Perhaps for these words more than any others, Hesse’s fate was sealed.

One is left to wonder why Hesse’s remarkable story has not been publicized more widely. Perhaps one reason lies in a scandalous affair that Gailus’s research uncovers. During a house search, the Gestapo found some private letters of Hesse’s that suggested that he had had a romantic relationship with a married woman with a school-aged child whose husband was fighting in the war (58-59). The fact that the affair with the unnamed woman took place is not in question (the Gestapo bemoaned the fact that Hesse proclaimed that “God has already forgiven him for this adultery. There is no trace of a sense of guilt ….” (59); also, Hermann Klugkist Hesse (no relation to Hermann Albert and Helmut), an Elberfeld pastor and friend of the family, tried to deal with the fallout of the Gestapo’s discovery with Elberfeld parishioners and church leadership, as well as with Helmut himself (59-60); finally, according to Klugkist Hesse, gossip about the matter had spread through the Elberfeld Reformed community and beyond (60-62)).

Yet, as seriously as the matter of adultery was regarded in such a pious Reformed community, the lack of support that Helmut apparently received from his church community while in prison and the concentration camp might be regarded as more scandalous than Helmut’s sins. So great was “the matter with Helmut,” as the affair was called, that Klugkist Hesse bitterly relays that local church leaders did not once visit Helmut during his nearly six-month ordeal, despite having visitation rights (60, 64 – 65).

In the end, due to Helmut’s physical and psychological frailty, as well as his rigid Reformed upbringing, Gailus regards Helmut Hesse as a “difficult martyr” – but a martyr nonetheless (69-70). Gailus argues that, despite his idiosyncrasies and failings, because of his incredibly courageous advocacy for Jews especially but also for his fellow travelers in the Confessing Church who had dared to speak out against the regime, Hesse merits a special place in the pantheon of Protestant “heroes and martyrs.” In fact, his name belongs with those of Dietrich Bonhoeffer, Friedrich Weißler, Elisabeth Schmitz, and Hans and Sophie Scholl (among others) (71-73). Given the case he has presented in this excellent study, it is hard to argue with this conclusion.