Manfred Gailus (who is one of the editors of this quarterly review) has published several studies of little-known and under-examined individuals in the German Protestant churches under National Socialism, including Helmut Hesse, Elisabeth Schmitz, and other Protestant women who resisted Nazi racial policy. These books are not only detailed studies of what dignity and heroism in Nazi Germany looked like. They reveal how marginalized such people were in their own times and all too often in the historiography.[1] 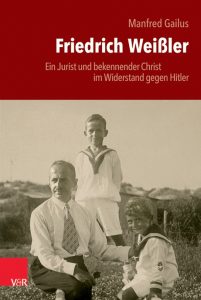 Friedrich Weißler is another such figure. A legal advisor to the Confessing Church, he is usually mentioned (if at all) in his connection to the 1936 Confessing Church memorandum (Denkschrift) to Adolf Hitler. Tortured and beaten to death in Sachsenhausen in February 1937, Weißler was the only person to be killed as a result of the memorandum. Not coincidentally, he was also the only “Volljude” involved. This 2017 book by Manfred Gailus is a gripping biography of a courageous man and a well-documented account of the genesis and aftermath of the memorandum. (Gailus is the first author to examine the papers that were in the family possession.)

Weißler was raised in a secular and patriotic Jewish home. His father was a lawyer who was such a conservative nationalist that he committed suicide in the wake of the Versailles Treaty. Weißler studied and began to practice law during the 1920s, married a Protestant pastor’s daughter, and had two sons. Although he certainly encountered antisemitism in this first decade of his career, the Weimar years were generally happy ones professionally and personally. He moved steadily ahead in his career and became director of a legal journal; he also published books and articles on various aspects of the law. In 1932 he was appointed director of the regional court in Magdeburg. The Weißler family moved there in January 1933.

Within days of the Nazi ascent to power his life changed dramatically. Weißler issued a fine against a young SA man accused of violence who had appeared in court in uniform. The local Nazi press immediately targeted the “Jewish” judge. In an ugly incident local SA and Stahlhelm members pushed their way into the court building and hung a swastika flag from the balcony facing the town square. They then dragged Weißler to the balcony and forced him to salute the swastika flag. A few days later Weißler was suspended from his position, and in July he lost his position under the new civil service laws. Under Nazi racial laws he was a “Volljude.” In September the family, including Weißler’s elderly mother, moved to Berlin.

Weißler was 42 years of age. He had a very small pension and the family’s assets were modest. Having joined the Protestant church during the 1920s, in 1934 he became a member of the Confessing Church and developed close ties to the most radical circles in Dahlem. His legal expertise now became useful to the Confessing Church leadership as they navigated the realities of Reich church politics and Nazi law.

As in his other books, Gailus documents the antisemitism that was all too present in Confessing Church circles. It was something that Weißler encountered repeatedly and personally. The portrait that emerges is of a man who was characteristically reserved but outspoken and unafraid to confront antisemitism. After Pastor Walter Thieme of the Stadtmission defended Adolf Stoecker’s warnings against the “influence of the Jewish spirit on the life of our Volk,” Weißler wrote Thieme that he could “summon no understanding for your behavior.” He also critiqued members of the Deutsche Christen—a courageous risk for someone in his position.

All this took its toll. There are poignant examples of friends and colleagues who abandoned or turned against the Weißler family. Having received an antisemitic letter from one such “friend” Weißler noted that he was replying “only in consideration that you like so many others have succumbed to the general psychosis of this era, and given that which we previously shared.”

This general antisemitism is an important context for Gailus’s account of the 1936 memorandum to Hitler. Like all Confessing Church protests, it was a mixed bag. A small group within the Confessing Church had been urging the leadership to issue a clear public protest against the regime’s antisemitic measures; in the wake of the September 1935 Nuremberg laws these efforts gained new momentum. Although most Confessing Christians were focused primarily on church members (so-called “Christian non-Aryans”) there were others (notably Elisabeth Schmitz) who wanted the church leadership to speak decisively about the persecution of all German Jews.

These efforts led to the Confessing Church leadership’s decision to issue a memorandum and send it directly to Adolf Hitler. The decision coincided with growing divisions within the church opposition between more radical voices like Martin Niemöller and Dietrich Bonhoeffer and the church’s more compromising leaders. The memorandum was the work of a committee and like many such documents it had been considerably watered down by the time it was completed. The result was primarily an expression of the Confessing Church’s concerns about the Nazi regime’s pressures on the churches and the “dechristianization” of German society. It opened, for example, with a conciliatory expression of gratitude to Führer for defeating the threat of “bolshevism.”

The most notable section of the memorandum however condemned antisemitism in the most explicit wording that would ever be issued by the Confessing Church. It criticized the growing Nazi incitement of anti-Jewish hatred, particularly propaganda aimed at younger Germans, as “anti-Christian.” It went further, condemning the extrajudicial nature of Gestapo measures and the concentration camps, and warning against the “deification” of the Führer.

The memorandum was intended for Hitler’s eyes only and those involved were sworn to secrecy. Supposedly there were only three copies: a document personally delivered to the Reichskanzlei on June 4, 1936, by Pastor Walter Jannasch; a separate copy given to Birger Forell, pastor of the Swedish Church in Berlin; and another copy placed in the safe of the church chancellery in Berlin. It is not known whether Hitler ever even saw the memorandum; the Chancellor’s Office forwarded it to the Reich Church Ministry.

On July 15—two weeks before the opening of the Berlin Olympics—the New York Herald reported on the memorandum, and on July 23 the Basler Nachrichten published the entire document as an example of Protestant opposition to the Nazi regime. The story was also picked up by leading papers like the New York Times and the London Times.

Alarmed, the Confessing Church leadership immediately tried to find out who had leaked the memorandum. They focused on individuals with foreign press contacts, including Friedrich Weißler, who had advised throughout the planning of the memorandum. The others were Werner Koch, a seminarian who had studied with Dietrich Bonhoeffer in Finkenwalde, and Ernst Tillich, who had studied under Bonhoeffer in Berlin before abandoning his theological studies. Weißler admitted to the church leadership that he had given a copy of the memorandum to Tillich (who knew Koch and had ties to the foreign press).

Gailus methodically reconstructs the subsequent events. Weißler, Koch, and Tillich were arrested in October 1936, as was Dr. Heinrich Schmidt, a lawyer who worked for the Confessing Church. Schmidt was released after a short time, but the other three were interrogated throughout the fall of 1936. In the meantime the Confessing Church leadership distanced itself from the group and the memorandum. In a late October meeting it was Martin Niemöller who argued that the church had to distance itself completely from Weißler: “We owe it to the Confessing Church.”

In a damning letter to Heinrich Himmler in early February 1937 the Confessing Church leadership emphasized that Weißler had never held an official position in the Confessing Church and had served only in an informal capacity. Five days later the three men were transferred from the Gestapo prison in Berlin to Sachsenhausen. Koch and Tillich were imprisoned in a block doing forced labor and released after several months. On the orders of Sachsenhausen commandant Karl Koch, Weißler was placed in solitary confinement a different block of the camp. Six days later his wife received word that he was dead. Accompanied by Heinrich Schmidt, she went to the camp and was able to see that her husband’s face was swollen and badly bruised.

Even by Nazi standards, Weißler’s death was considered extrajudicial, and at the end of 1938 three Sachsenhausen guards were tried in the killing. It became clear from the court proceedings that Weißler had been badly beaten over the six days of his imprisonment before dying of his injuries, and equally clear, as Gailus notes, that the sole motive was “blind hatred” against Jews. Only one of the guards was sentenced, to one year in prison.

Gailus’ account acknowledges those members of the Confessing Church who did stand by Weißler throughout this ordeal—notably Hans Böhm and Fritz Müller. Franz Hildebrandt, a Confessing vicar affected by the racial laws who would soon flee himself to England, was also outspoken in Weißler’s defense. In the aftermath of his death, Hildebrandt and Heinrich Schmidt continued to help Weißler’s widow and family. Weißler’s eldest son Ulrich was able to emigrate to England in 1939 on the Kindertransport. His widow and other son remained in Germany, assisted financially by friends. Weißler’s elderly mother, who lived with the family, was deported to Theresienstadt in 1943 and died there shortly thereafter. Ironically, when Martin Niemöller was sent to Sachsenhausen in March 1938 as a “special prisoner” of the Führer, he was imprisoned in the same block in which Weißler had been murdered.

Gailus concludes this fine book with a reflective chapter on the continuing importance of these individual histories, even decades after the end of National Socialism. Readers of this journal will not need to be convinced of that, but I wish this book could be translated into English. The story of Friedrich Weißler is a crucial corrective for the all too frequent superficial understandings of the Confessing Church. I will add that reading this book in light of our current events in the United States, including the murders of Black men by the police and the rise in right-wing hatred and violence, was especially sobering.

[1] I should note that the oral histories I conducted in Germany during the 1980s included interviews with Werner Koch and Heinrich Schmidt, both of whom were involved in the memorandum. Excerpts from both interviews, giving detailed accounts of the memorandum and Weißler’s death, were published in For the Soul of the People. Both interviews are now available to scholars in the collections of the United States Holocaust Memorial Museum (the transcript of the Schmidt interview, which was not taped, is being added): https://collections.ushmm.org/search/catalog/irn707864.