Several books and numerous magazine and newspaper articles appeared in 2021 on the occasion of the hundredth birthday of Sophie Scholl. She was born on 9 May 1921 in Forchtenberg (Württemberg) and was executed at the age of 21 in the Munich-Stadelheim prison on 22 February 1943, having been by sentenced to death on the same day by the National Socialist People’s Court on the charge of “preparation for high treason.” One of the most competent publications by far in this anniversary year is the great biography by the Protestant theologian and historian Robert M. Zoske. The author received his doctorate at the University of the Federal Armed Forces in Hamburg in 2014 on the basis of a study of Sophie’s brother Hans Scholl. Four years later he presented a highly acclaimed, scholarly, and critical biography of Hans Scholl, which he has recently followed up with this substantial portrait of the short life of Hans’ younger sister and fellow resister. Taken together, Zoske must undoubtedly be counted one of the best experts on the history of the Scholl siblings and the resistance group of “The White Rose.” 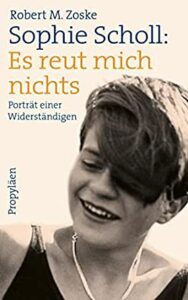 Zoske worked for a long time as a practicing theologian and pastor in northern Germany. For obvious reasons, he is particularly interested in religious aspects in the biography of his protagonist, so that it seems almost appropriate to speak of the book as a biography of a young Protestant who is religiously searching. Sophie Scholl came from a Christian family: her mother Lina is described as a “cheerful Pietist” and her father as a “skeptical cultural Protestant.” Nonetheless, the Scholl siblings became enthusiastic about the Hitler movement in their teenage years. For many years, Sophie Scholl was a group leader in the League of German Girls (Bund Deutscher Mädel, or BDM) in addition to her church formation.

At 55 pages, by far the most extensive chapter is “Beloved,” which is devoted to Scholl’s complicated love affair with the soldier Fritz Hartnagel, which began in 1937. In 1940 alone, the two exchanged 91 letters, which reveal deep insights into the extremely difficult, torn mental life of the 19-year-old. She never escaped an ongoing vacillation and hesitation between being in love and physical love on the one hand, and her religious, pietistic interpretation of “sex as sin” on the other. And this fluctuation was accompanied by multiple, strenuous attempts to reduce their love relationship to the “purely spiritual,” but which often failed in practice.

The reading of the Scholl siblings and their circle of friends is informative: one encounters a lot of Rilke, Hermann Hesse, and Thomas Mann. In addition, genuinely religious-Catholic literature was very popular among them: Georges Bernanos, Paul Claudel, Romano Guardini, and then also classics such as Augustine, Thomas Aquinas, and Blaise Pascal. Their reading was generally not systematic, but rather a searching reading with many interruptions and sudden breaks. Influences from Carl Muth, the editor of the Catholic magazine Hochland, could be felt here. The circle of friends had contact with him during the later Munich years, beginning in 1940-1941. This resulted in the development of a religious motivation for resistance—in a sense “with God against Hitler.” By all appearances, there was no contact between the Scholl group and the Confessing Church at all.

After graduating from high school, training as a kindergarten teacher, and performing her compulsory labor service, Sophie Scholl began studying in Munich in the summer semester of 1942. However, she was seldom seen in the lecture halls of the university. It was only towards the end of this turbulent year that she was gradually included in the resistance actions of the circle around her brother Hans and Alexander Schmorell. It was the decisive year of her political awakening, and the moment of her decisive participation in the political resistance against Hitler.

Zoske’s deserving book clears up all kinds of legends about the Scholl siblings. In the final chapter, “Nachspiel,” the author traces the genesis of the “Icon Sophie Scholl” during the post-war period. The hour of birth of this transfiguration was the “Biographische Notizen” (1950) of her sister Inge Scholl, which was published in 1955 as the book Die Weisse Rose [The White Rose]. Since then, many allegations have been corrected, and the factual knowledge of the resistance group has also increased significantly. This new biography presents the reader with a reliable picture of the life of the young Protestant martyr in the resistance against Hitler. Important documents are printed in the appendix of the book, including detailed excerpts from Sophie Scholl’s interrogation transcripts (pp. 312-348). The early, seemingly-authentic memories of her friend Susanne Hirzel from 1946 are also impressive. From this I would like to quote in conclusion: “We met at the age of 14 in the League of German Girls. She was like a fiery, wild boy, wore her straight, dark brown hair in a man’s cut and preferred to wear a blue fisherman’s shirt or her brother’s winter shirt. She was lively, bold, with a bright, clear voice, daring in our wild games and of a divine sloppiness.”