John Moses is a distinguished scholar of German history, not least admired for his standard two-volume study of German trades unions from Bismarck to Hitler, published in 1982, and, more recently, his book The Reluctant Revolutionary: Dietrich Bonhoeffer’s Collision with Prusso-German History (2009). He is also an Anglican priest, and of a kind that is getting harder to find these days. This collection of recent essays finds him entering with gusto into contemporary church debates and bringing with him a good deal of his academic experience and weight. In many respects it is tempting to sense that as a historian and as an Anglican Moses has much in common with John Conway, the founding father of this journal. But here Moses has to confront a number of distinctive giants at large in the landscapes of Australian Anglicanism. In particular, there is the question of the Diocese of Sydney. 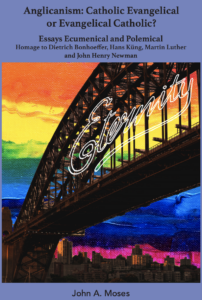 In his foreword to the book, Mark Lindsay welcomes Moses warmly into the realm of contemporary theological angst, affirming the proper place of a historian in all such things. This may seem all too obvious, but then the authority of the historical craft, and of historical knowledge altogether, has for some years now become increasingly obscure to those who oversee the life and work of most of our Protestant churches. When a moment of vital significance turns up historians are seldom to be found in the counsels of authority. If anything, they are likely to be deliberately excluded from them, though they might now and then be recruited to write introductory paragraphs. Evidently, we are all expected to return to a vigorous state of primitive Christianity as though nothing of significance has occurred across the intervening centuries. But there may be other reasons to maintain this state of ignorance. The historian of the modern church is not quite a tame creature. The churches prefer a show of loyalty, while those in charge of them care not at all to be criticised. Historians tend to do this rather freely, particularly when provoked. The historian of the Reformation may unhelpfully point out doctrinal contradictions or emphasize acts of violence. The historian of secularization will certainly prove to be bad for morale. As for the historians of the Third Reich, it is much safer to leave them in their university departments than to invite them to observe patterns and parallels. And why should there be any, after all?

John Moses has certainly not been tamed; nor has he submitted to obscurity or been shunted unprotestingly into the pleasant groves of academe, much as he may enjoy being there. He acknowledges, generously, the influence of those who have taught him across a long and busy life. In this book he is wonderfully adamant that he has a voice for the contemporary Church and that he is, if quite necessary, prepared to raise it. He, like many other unhappy observers, observes that Anglican Sydney is a diocese ‘captured’ by a narrow, rigid – indeed, ideologized – conservative evangelicalism. Moses himself has inevitably been a casualty of this obscurantism. But he has not fallen silent, not least because he has too confident, and too profound, a sense of the traditions in which he has been nurtured. All of the lectures and essays in this volume present these qualities vividly and they make it a book well worth reading.

There are seven chapters – lectures and articles for various audiences – and an Epilogue. There are also appendices, chosen with intent (one is ‘John Henry Newman’s definition of a Gentleman’). It is important to acknowledge that while Moses is clearly eager to set about his principal adversaries, the primary purpose at work is both generous and constructive. He is devoted to pursuing a picture of what Anglicanism can still seek to offer the whole Christian Church, in ecumenical vision and in liberal, reconciling gifts. One essay is ‘The case for a renewed Anglicanism’, and another, ‘The Chaos of Anglicanism: Towards unravelling the Paradox’. There follows an attractive portrait of Father Peter Bennie, a scholar-priest who comes to embody many of the virtues to which Moses is drawn. ‘The real antithesis of the Catholic Church, warns Bennie, ‘is the sect, and sectarianism ever stunts the spirit, binds the mind, and inhibits the imagination.’ (p. 107.)

One of the most attractive qualities of the book is the freedom with which Moses writes of his own life and experiences, and of the many people he has known. This reveals a truth which he plainly acknowledges: that often what divides opinionated people is their formation and education and – above all – their ongoing patterns of reading. As a schoolboy in the far North of Queensland he was impressed by Dr Wilhelm Lorenz Rechnitz, a German Jew who had become an Anglican and was now to be found teaching Latin in St Francis College. (‘The Church of England’, Rechnitz warned the young Moses, ‘is a good thing in bad hands.’) He also encountered the priests of the Brotherhood of St Barnabas, ‘a remarkable group of young men, almost exclusively “Oxbridge” educated priests’, while the bishop, John Oliver Feetham, was a figure formed very much on the same lines.  As a student at the University of Queensland his eyes were opened still wider and then followed the almost-miracle of a period of post-graduate study in Germany. Here, in Munich, Moses was taught by Franz Schnabel, ‘a liberal-minded Roman Catholic scholar of immense erudition and humanity’, (p. 3) who had resisted National Socialism. A spell at the University of Erlangen followed under the benign tutelage of Waldemar Besson, Karl-Heinz Ruffmann and Walther-Peter Fuchs.

After all of this the young John Moses was hardly likely to spend the rest of his days poring over the works of James Innell Packer. Yet, as an honorary assistant curate in a Brisbane suburb for seventeen years, he would have to find a way of collaborating with a rector who had done exactly that – while the rector, for his part, found that he had to cope with his highly educated, internationally-minded curate. Significantly, it was not here that Moses the priest came unstuck, but later, in the diocese of Armidale, where he found he was required to affirm explicitly the inerrancy of the Bible, to repudiate the ordination of women and to disavow the toleration of homosexuals. ‘In an open society such as exists in Australia’, he reflects, ‘one does not expect to encounter people, let alone those calling themselves Anglican, who exhibit a mindset reminiscent of doctrinaire Nazis or Communists.’ (p. 12) Stinging words, no doubt, but words that he is well qualified to justify.

Moses can certainly take comfort in the company of giants from diverse traditions: the writings of Martin Luther, Dietrich Bonhoeffer, Hans Küng and John Henry Newman suffuse the book. For him the conspicuous quality of Anglicanism lies not in the brittle rigidities of denominational existence, still less in acts of intellectual iconoclasm and ‘doctrinal terrorism’ (p. 10), but in the promise of a richly creative ecumenical vision. It is still his church and he will not abandon it. In part this is because he has found too much to love and admire in it, not that there is much sentimentality here. In one essay he observes its various tribes with a caustic eye (indeed, his description of ‘Old-fashioned “Spikes”’ is hilarious). For Moses himself the Christian faith remains unique in offering to the world a radical social ethic, expressive of love, humility, tolerance and understanding – all qualities which might never have found a home there without it. In their strenuous assertions, impositions and proscriptions the fundamentalists of Australian Anglicanism have sought to bury what is essentially true, vital and enduring in it. In this sense the book is a protest, and perhaps a warning. But it is certainly not a work of lamentation, for the general character of it remains perseveringly faithful. It would be a pity to leave it in Australia, not least because we have all come to know, in one way or another, the issues of which it speaks. Moreover, few scholars of history have stepped out of their lecture rooms to deplore, declaim and insist as bravely and cogently as this fine scholar of modern Germany.