Most of the literature on the intersections between the German churches and the Nazi concentration camp system has concerned the imprisonment of Christian clergy. In addition to studies of the Dachau “clergy barracks” (where most of these clergy were held, including more than 1700 Polish priests) there are studies of prominent figures, such as Martin Niemoeller (who was imprisoned in Sachsenhausen and then Dachau) and Dietrich Bonhoeffer (who was in Buchenwald before being sent to Flossenbürg to be executed). Several studies of the Confessing Church (including my own work) have documented instances in which clergy were arrested and sent to camps or prisons, even briefly.

In other words, the subject has been framed largely in terms of clerical resistance and the persecution of the churches. Yet, the growing scholarship on the camp system, with its detailed portrayal of its scope and visibility, raises important questions about whether and how German Protestant and Catholic churches addressed these larger issues during the 1930s. The United States Holocaust Memorial Museum’s ongoing research project, the Encyclopedia of Camps and Ghettos, has documented more than 44,000 camps, prisons, and ghettoes throughout Nazi-occupied Europe. Within Nazi Germany, between 1933 and 1939, there were hundreds of small camps and sub-camps (in addition to Gestapo prisons), beginning with the establishment of Dachau in 1933. Those sent to these early camps included members of opposition political parties and other opponents of the regime, pacifists, Jehovah’s Witnesses, homosexuals, and others. 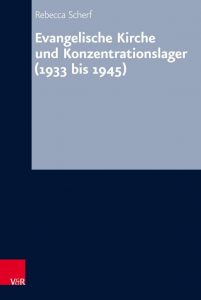 Rebecca Scherf’s study of the German Evangelical Church’s (GEC) responses to the concentration camps is a significant new contribution to the scholarship. While her main focus concerns Protestant clergy who were sent to concentration camps (she confined her study to concentration camps, so it does not include pastors who were in prisons), she has broadened her analysis to address three points of intersection between the GEC and the concentration camp system. The first concerns the relationship between regional churches and the Protestant chaplains who served in the early camps. The second examines the official church responses when clergy were sent to camps. The third looks at the experiences of those who were imprisoned in camps by drawing on contemporary documentation and subsequent memoirs. There are several appendixes with helpful graphs illustrating the number of clergy arrests by year (1935—when there were mass arrests of Confessing pastors due to a pulpit protest—was the peak), by camp, and by regional church. While most clergy who were sent to camps were held only briefly (indicating that the Nazi state intended such arrests as a form of intimidation), the number of arrests during the war grew and fewer were released. There is also a chronologically and geographically organized list of the Protestant clergy who were imprisoned.

The study begins with a brief synopsis of the rise of National Socialism and the responses within the GEC, particularly with respect to the German Church Struggle and the sharp divisions between the “German Christian” movement and the Confessing Church between 1933 and 1935. Although the Church Struggle thwarted a complete alliance between the GEC and the Nazi state, it was focused on internal church matters, not political opposition. By 1935 the Confessing Church clergy and leadership were marginalized in most regional churches; the official church leadership was either openly “German Christian” or had made its peace with the regime. This, in turn, shaped church policy toward the camp system, including how regional church leaders reacted when their clergy were arrested and imprisoned.

The earliest issue that arose concerned the question of Protestant chaplains in the camps. In July 1933 Hermann Stöhr—a pacifist who would be executed in 1940 for his conscientious objection to military service—wrote GEC leaders in Berlin to ask whether there were Protestant chaplains in the camps. By that date, there were concentration camps in sixteen of the twenty-eight regional churches (some of these early camps were in existence for a relatively short time), and around 18,000 people were imprisoned in these camps. Stöhr also raised more directly political questions, noting that local pastors were not being informed when camps were set up in their districts, nor were they able to obtain family contact information for those who were imprisoned. The GEC church leadership in Berlin replied several months later that such arrangements had not yet been made.

In the meantime, however, some of the affected regional churches began to assign pastors to serve as chaplains in the camps. Most of the chaplains were “German Christians” and understood their pastoral duties accordingly. In many early camps, there was an emphasis on the “re-education” of political prisoners, and Scherf quotes one chaplain who stressed how essential Protestant chaplaincy was for prisoners’ rehabilitation “into the great German Volksgemeinschaft of the Third Reich.” In another instance, Scherf discovered a camp chaplain who tried unsuccessfully to report and stop the mistreatment of prisoners. In some camps, chaplains held regular worship service and were able to counsel prisoners; in others, their duties were strictly limited—in Dachau, for example, the chaplain was permitted only to hold the service and was forbidden to have any other contact, including conversation, with the prisoners. With the gradual consolidation of the camp system under central SS oversight, the state tightened its restrictions on even “German Christian” chaplains, and Scherf found a growing number of cases in which chaplains were banned. In 1937 Heinrich Himmler banned the chaplaincy in the concentration camps; no protest came from the official church leadership.

The second section of Scherf’s study focuses on the Protestant clergy imprisoned in the camps (virtually all of these clergy had ties to the Confessing Church). Relatively few Protestant clergy were actually sent to concentration camps—she documents only 71 in this book —although there were many more who were arrested and imprisoned in Gestapo prisons. In March 1935, for example, some 700 Prussian pastors were imprisoned briefly after reading from the pulpit a Confessing Church protest against the Nazi view of religion, but only 26 of them were sent to camps. In many cases, the decisive criterion seems to have been the extent to which the regional church leadership was overtly “brown.”  Most of the clergy sent to camps were released the same year of their arrest.

For her case studies, Scherf focuses on the two camps with the highest number of Protestant clergy, Dachau and Sachsenburg (which was in Saxony). Dachau had the highest number of imprisoned clergy (over 2700) and they came from a number of different countries; most of them were Polish Catholic priests, but there were also clergy from the different Orthodox churches, Old Catholics, and other Protestant groups, as well as two Muslims. In contrast, most of the clergy imprisoned in Sachsenburg were from Saxony, the region in which the camp was located, and most had been arrested in conjunction with the March 1935 pulpit proclamation. The Bishop of Saxony was Friedrich Coch, one of the leading “German Christians.” Scherf offers a detailed and fascinating case study of the ways in which the camp experience provoked political protest and a different theological response among those in the camp, leading them to send a protest letter to the Saxony church leadership for its lack of solidarity. Even after the war ended several of those who had been together in Sachsenburg continued to work through their experience theologically.

The experiences of Confessing clergy who had been imprisoned fostered the post-1945 portrayal of the Confessing Church as a resistance group that had been persecuted for its opposition to Nazism—but it also deepened the postwar divide within the Evangelical Church itself, for some of those who had been imprisoned blamed the official church leadership for its failure to speak out. Nonetheless, the history of clergy who were sent to camps, including accounts by Catholic priests who had been in Dachau, became an important element in the postwar narratives about the “martyrdom” of both churches.

In her conclusion, Scherf discusses the ways in which history touches on the larger issue of how the German Evangelical Church responded to Nazi crimes before and after 1945. This study of the church responses to the concentration camps, particularly during the 1930s, offers some significant new insights into the relationship between the Protestant churches and the Nazi state.