Review of Gerhard Ringshausen and Andrew Chandler, eds., The George Bell-Gerhard Leibholz Correspondence: In the Long Shadow of the Third Reich, 1938-1958

Gerhard Leibholz was a German attorney and professor of state law, married to Dietrich Bonhoeffer’s twin sister Sabine. George Bell was a British Anglican priest, the bishop of Chichester and an active leader in the international Protestant ecumenical movement who became one of Bonhoeffer’s closest allies. These two very different figures would be brought together by the accidents of history, but this fascinating volume shows that they found common ground on a number of issues. Starting on the eve of the Second World War and extending into the 1950s, the Bell-Leibholz correspondence gives a vivid portrait of the challenges they faced as well as their reflections on the nature of democracy and totalitarianism, and on Christianity’s future in a transformed postwar political order.

A baptized Protestant, Leibholz came from a secular Jewish family and was categorized as a Volljude under the Nazi racial law. After the passage of the Law for the Restoration of the Civil Service in April 1933, Leibholz’s father lost his position, dying only five days later (there is speculation that his death was a suicide). One of his brothers, Peter, lost his position at the same time. A professor in Göttingen, Gerhard Leibholz managed to keep his position until early 1935. He and his family remained in Nazi Germany until spring 1938, when his brother-in-law Hans von Dohnanyi warned them of the regime’s plans to require all those affected by the racial laws to have a “J” in their passport. Bonhoeffer and Eberhard Bethge drove the Leibholzes to the Swiss border; from there they made their way to England where they were joined later by their two daughters. 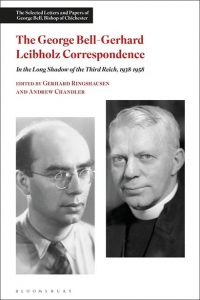 The volume opens with Bell’s September 1938 letter to Bonhoeffer assuring him of his willingness to help the Leibholzes. George Bell had been actively involved since 1933 in assisting refugees from Nazi Germany, including members of the Confessing Church who were affected by the Nazi laws. The early correspondence offers a detailed picture of the difficulties refugees faced even after they reached a safe country. They could not assume, of course, that they would remain in safety; Leibholz’s brother Hans and his wife managed to reach Holland, but committed suicide in 1940 after the German invasion. Added to this anxiety were financial concerns (Germany froze Leibholz’s assets when he fled, so they arrived in England with nothing), worries about the family they had left behind, existential concerns about employment and the future, and dealing with anti-German prejudice in England once the war began. In May 1940 Leibholz was interned as an “enemy alien” on the Isle of Man, along with a number of Confessing Church pastors and their wives. Bell managed to obtain his release in August 1940, after which the two men pursued the possibility that the Leibholzes might immigrate to the United States. With the assistance of Dietrich Bonhoeffer’s contacts in New York, Leibholz was offered and accepted an invitation to Union Theological Seminary in 1941, but by then the door had closed due to new U.S. restrictions on immigration.

Bell succeeded in cobbling together various stipends and opportunities by which Leibholz could support his family in England. A moving aspect of this book is Bell’s often heroic support and advocacy for the German refugees, particularly as popular British sentiment against them intensified.  The bishop also came under growing fire for his opposition to total war and his arguments on behalf of the “other Germany,” positions that probably cost him an appointment as Archbishop of Canterbury.

The book’s greatest significance, however, may be its documentation of the developing conversations between the two about Christianity, democracy, human rights, and their visions for the postwar European order. Their correspondence was part of a larger international conversation at the time that included diplomats, intellectuals, Catholics, Protestant ecumenists, and others. The detailed discussion of these issues in this volume could be an important resource for the scholarship today about the shaping of post-1945 Europe, particularly the differing conceptions of human rights that emerged after 1945.

Leibholz viewed these social and political questions from the standpoint of someone who had studied law; his doctorate had focused on issues of legitimacy in parliamentary law. (As an aside: in 2000 I interviewed Gerhard Riegner, who directed the World Jewish Congress during the war years. Riegner told me that he had studied law in Berlin during the 1920s with Leibholz and spoke of their early common commitment to human rights.) Leibholz shared Bell’s view that the major battle of their times was the defense of liberal democracy and its values against the threat of totalitarianism. Their understanding of those ideals was very much the product of the era, culture, and class from which they came. Leibholz, for example, viewed the “totalitarian” form of nationalism in National Socialism as something completely different from Prussian nationalism.

It is difficult to know how much previous Bonhoeffer family discussions had influenced Leibholz before he arrived in England, but the extent to which he began to focus in England on the centrality of Christian teaching and doctrine for Western ideals is striking. He was naturally interested in the German church struggle in which his brother-in-law was so engaged, and his first published article in Britain was a 1939 report about the situation confronting German churches. By 1940 he was already influenced by Bell’s book Christianity and World Order (Leibholz’s review of the book is included in an appendix to this volume). In 1942 Leibholz gave a series of lectures on “Christianity, Politics, and Power,” that was subsequently published in the widely read Christian News-Letter.

Leibholz intently followed British reports and commentary on the implications of the European situation. His letters to Bell are filled with analysis and commentary, particularly his sense of how Germans would react to British public policy and statements. Bell clearly valued Leibholz’s opinion and feedback. One of this volume’s many revelations is the extent to which Leibholz shaped Bell’s view of the German resistance. Bell sometimes sent Leibholz drafts of public statements in advance for his opinion, as in late 1942 with a question he planned to raise in the House of Lords: “I want to ask you whether the form in which the Question if put could and would be twisted by Goebbels so as to make it appear that I or the Church of England had turned Communist….” (115) Bell frequently shared Leibholz’s observations with other church and political officials, but with time Leibholz developed his own connections and sometimes wrote these figures directly. In a letter of 19 June 1942 to J. H. Oldham, for example, he commented on the Anglo-Russian treaty and the need for more discussion in Britain of what form of German government “the Anglo-Saxon countries would be prepared to accept after a collapse of ‘Hittlerite Germany’”(94). Another interesting development that was new to me was Leibholz’s growing belief that Catholic teachings on natural law were fundamental for modern liberal democracy, and his emphasis on the need for the “re-Christianization” of Germany after the defeat of National Socialism.

As the war progressed the personal strains on the Leibholzes intensified. They naturally focused on the German resistance and the fates of their family members. They learned of the April 1943 arrests of Dietrich Bonhoeffer and Hans von Dohnanyi only four months later, in August. Two months after the failed coup attempt of July 1944, Leibholz compiled a list of people whom he believed had been executed and sent it to Bell with a comment about the loss this would mean for a postwar Germany. In the spring of 1945, they received conflicting information about the executions of Dietrich and Klaus Bonhoeffer (the Leibholzes initially believed that Dietrich Bonhoeffer had survived). They only received confirmation of Dietrich Bonhoeffer’s death on 31 May from Adolf Freudenberg in Geneva; confirmation of the deaths of Rüdiger Schleicher and Hans von Dohnanyi didn’t arrive until late July. Bell immediately began to write about the German resistance, and much of the correspondence during Leibholz’s remaining time in Britain concerned the reconstruction of what had happened to his brothers-in-law.

In 1947 the Leibholzes returned to Germany. Gerhard Leibholz became a federal judge in Karlsruhe in 1951 (he continued, however, to teach in Göttingen) and remained there until his retirement in 1971. After his return Leibholz sent letters reporting on denazification and the political reconstruction of Germany, but over time their exchanges grew infrequent. The friendship continued until Bell’s death in 1958. The final document in the volume is the Leibholzes’ condolence letter to Bell’s widow in October 1958, in which they wrote that they had “lost the most faithful and best friend we have had in the English speaking world.”

This book includes an excellent introduction by Ringshausen and Chandler giving the general historical context for the correspondence. The letters are grouped by year, with a short chronology for each year, and there are helpful footnotes throughout that identify the people mentioned and give more background for the issues being described. This volume will certainly be of interest to Bonhoeffer scholars and those interested in ecumenical and British church history. I hope that it will find a wider audience, because these extensive and often revealing conversations between a German refugee lawyer and a British Anglican bishop provide a close-up view of the larger historical conversations about war, democracy, human rights, and the construction of civil society at a critical juncture in twentieth-century history.