Wolfgang Huber is a distinguished voice in the German theological world, both academic and ecclesiastical, and a sustained treatment of the life and work of Dietrich Bonhoeffer by such a figure at once demands attention. His book is in many ways an introductory survey which seeks to unite the ‘fragments’ of Bonhoeffer’s life and thought in a single coherent picture, for, as Huber remarks, at every turn in Bonhoeffer’s short life, ‘belief and life, theology and resistance closely interrelated’ (p. 9). The fertile phrases which Bonhoeffer cast upon the waters of the theological world are all here and considered in turn with authority and insight. Altogether, Huber views his primary material with poise and it may be said that every kind of source – theses and books, letters and poems –  is justly represented. As befits such a portrait the acknowledgement of other secondary studies is kept to a minimum: here they sharpen perspectives and come and go at important junctures without crowding the picture. Sometimes there is an acknowledgement of later debates which have come to define Bonhoeffer scholarship in the world at large, not least the guilt of the Christian Church, the campaign to claim Bonhoeffer as a ‘Righteous Gentile’, the two worlds of East and West Germany, and the controversies which emerged in the churches of South Africa under Apartheid. Huber clearly knows this broad ground very thoroughly indeed but here his attention is primarily claimed by Bonhoeffer himself and his voice is very much his own. 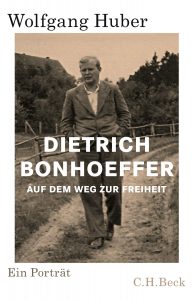 The structure of the book is not unduly distinctive, but it sets out clearly the overall argument and method. Huber’s Bonhoeffer is certainly a big and complex figure. He is also one full of contrasts and the author delights in framing and exploring them. An introductory section evokes the figure of Bonhoeffer as we might first encounter him in a variety of places, not least over the Great West Door of Westminster Abbey. There follows a section on Bonhoeffer’s background and early formation and then another three on his early work in the contexts of university and church life, the first situating him firmly in the landscapes of German thought, the second examining a theology of grace which was deeply rooted in the precepts of Lutheranism, and the third discussing the place of the Bible in a world of maturing historical criticism. Each of these sections present dualities which already defined so much in Bonhoeffer’s work (‘Individual spirituality or Society’; ‘The Church of the World or the Church of the Word’; ‘Acting justly and waiting for God’s own time’; ‘The Historical Jesus or the Jesus of Today’). The young Bonhoeffer is certainly very much at home in the intellectual landscapes of German Lutheranism but the emerging vision is an open one and there is no knowing where it will lead.

Huber acknowledges how extraordinary was Bonhoeffer’s achievement in maintaining sustained theological study under the many pressures and dangers to which his life exposed him. An extended discussion of the development and ‘actuality’ of Bonhoeffer’s pacifism precedes an examination of his place in the history of the German resistance against Hitler and his significance there as a ‘theologian of resistance’. Here Huber acknowledges frankly that to account for the motives which lay behind the actions of any figure of resistance, whether they became fundamental to events or peripheral, must be ‘difficult, even impossible’ (p. 172). At all events, with this decisive turning comes an intensification of the discussion of Bonhoeffer’s ethical writings and a deepening emphasis on the themes of guilt and responsibility. It is in these contexts of resistance that Huber is most of all struck by Bonhoeffer’s singular, even ‘astonishing’, new steps, and even if they only reach us as fragments the sense of a coherent picture remains. Indeed, it is in ‘the extreme loneliness of a prison cell’ that Bonhoeffer finds a ‘wonderful security’ in the achievement of a unity of faith, teaching and life (p. 34). A further section, stoutly entitled ‘No end to Religion’, again shows the importance of situating Bonhoeffer’s thought securely in the intellectual contexts with which he was familiar. A final, and rewarding, section on the ‘Polyphony of life’ maintains a fascination with dualities (‘Bach or Beethoven’; ‘Music or Theology’) and offers a particularly attractive discussion of Bonhoeffer and Gregorian plainsong (provoked by the famous remark to Eberhard Bethge). An epilogue reflects at length on ‘what remains’, searching through the subsequent publication of Bonhoeffer’s writings and the accumulating studies of his many interpreters, and observing, rather nicely, the creative achievement of a ‘polycentric internationalism’. A gentle parting note occurs with a reflection on Bonhoeffer’s late poem ‘The Powers of Good’, in which Huber finds a final place of rest in a vast, unsentimental and moving trust in God (p. 298).

It could be said that of the making of books about Dietrich Bonhoeffer there is no end. In such a field many new authors labour to produce some distinctive insight or bold (even tenuous) claim, perhaps to justify the writing of another book or to address a particular audience or time. Over the years particular aspects of Bonhoeffer’s thought have certainly been placed under many microscopes. It is natural at first to wonder if a new, introductory portrait by an established scholar might turn out to be something of an academic tour of duty. We may expect a good deal of craft and even a dose of wisdom. But Huber’s book is something better than this: the encounter of author and subject is duly rigorous but it is also fresh, alert and warmly responsive. Nothing here is taken for granted; often Huber acknowledges that he finds a particular idea, or development, ‘astonishing’ and one senses that he really does. Indeed, he serves his subject and his audience very well. Such a book would make an excellent place for German readers make a start. One might well hope for an English edition too.