In the first week of February 1941, while Martin Niemöller languished in the Nazi concentration camp at Sachsenhausen, the London Times was one of several international newspapers to announce his conversion to Catholicism. The New York Times headlined this story more circumspectly: “Niemöller’s Friends Deny His Conversion: Say Imprisoned Pastor Is Only Studying Catholic Doctrine” (New York Times, 5 Feb. 1941). Neither version was quite on target. Niemöller had not converted to the Catholic Church; however, his study of Catholic doctrine hardly represented mere curiosity. It involved a serious consideration on his part to convert. This brief moment in Martin Niemöller’s life has received relatively little attention, though it does get mentioned by some, including Matthew Hockenos in his recent Then They Came for Me: Martin Niemöller, the Pastor who Defied the Nazis (reviewed in CCHQ, 25/1, March 2019). 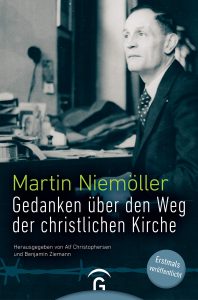 This book, edited by Alf Christophersen and Benjamin Ziemann, has given a surprising moment in Niemöller’s life its most thorough explication. It also offers readers an edited version of the handwritten manuscript Niemöller produced within a period of less than three months during his four years of solitary confinement in Sachsenhausen. His assessment of Catholicism versus Protestantism, a document which numbers over 200 pages in Niemöller’s hand, now comprises 150 printed pages in this book.

Many or most readers of this CCHQ online journal will know at least the main features of Martin Niemöller’s life. He is one of the most famous and most important participants in the German Protestant Kirchenkampf (Church Struggle) alongside important friends and colleagues such as Dietrich Bonhoeffer and Karl Barth. He founded the Pastors’ Emergency League in the fall of 1933. He participated in the creation of the Barmen Declaration in 1934, and he played a leading role in the first three years of the Confessing Church. Niemöller was arrested on 1 July 1937 and spent the next eight months in prison in Berlin, awaiting the outcome of his case. Then, having completed the necessary prison time required by the court, he was not released but designated a “personal prisoner” of Adolf Hitler. Instead of going home to Dahlem, a suburb of Berlin, he was hurried off to solitary confinement at the nearby concentration camp of Sachsenhausen, where he stayed from March 1938 until July 1941. At that point he was transferred to Dachau, near Munich, where he remained incarcerated until the collapse of the Nazi regime in May 1945. Niemöller emerged from Dachau a famous figure and he quickly became a leader in the postwar German Protestant Church. His international stature also was high, resulting among other things in a stint as President of the World Council of Churches from 1961-68. After a postwar life traveling the world as a famous advocate for various causes, he died in 1984 at the age of ninety-two. (Personal note: I caught up with Martin Niemöller in 1973 and sought his friendly advice, but only via telephone.)

Martin Niemöller was not a theologian, though he knew theologians. Martin Niemöller also had a first career that gave him a portion of public recognition. Born in 1892 to a Lutheran pastor, he chose life as a naval officer. When World War I began, he commanded a submarine which supported the German cause by sinking British ships. His first burst of fame in Germany came from these activities, especially with his war memoir, From U-Boat to Pulpit (1934), in which he described his wartime exploits as well as his postwar turn toward the church. By 1933, when Niemöller began developing what became his high profile in the Confessing Church, he was already forty-one years old, a pastor in the Dahlem suburb of Berlin, a husband, and a father to seven children.

It is clear from Christophersen and Ziemann’s careful work that Niemöller pursued the possibility of conversion to the Catholic Church with great seriousness. By the summer of 1938 he was using a Catholic prayer book for his daily devotions while sequestered in Sachsenhausen. By August he wrote to his wife that he was “astonished by the richness of prayers and biblical readings” (“erstaunt über den Reichtum an Gebeten und biblischen Lektionen”) in the Catholic tradition (p. 9). By the spring of 1939 he was angered by the attempt of church authorities in Berlin to remove him from his pastorate in Dahlem, a form of discipline intended for the most active opponents of Reich Bishop Müller and the Deutsche Christen (“German Christian”) leadership in the Protestant Church. By July 1939, he wrote, “the Protestant State Church has never been a Christian church” (“Die Evangelische Landeskirche [ist] niemals christliche Kirche gewesen”), but merely a bureaucracy (p. 11, quoting from Martin Niemöller, Brief aus der Gefangenschaft, 61). Soon he was asking Elsa, his wife, to send him books by or about converts to Catholicism, people such as John Henry Newman. This mid-nineteenth-century professor at Oxford University was ordained a priest in the Church of England in 1825, famously converted to Catholicism in 1845, was ordained a Catholic priest in 1847, and was created a cardinal in 1879. (Newman eventually achieved sainthood in the Catholic tradition in 2019).

From late August to the beginning of November in 1939, Niemöller began and finished the manuscript now described and printed in this book. Christopherson and Ziemann have had access to many sources. These include the document itself, plus letters Martin and Elsa Niemöller were allowed to send every two weeks, and records of the twice-per-month visits Elsa was allowed to make to Niemöller in Sachsenhausen, especially as recorded in notes Niemöller made after those meetings. All of these handwritten materials are available to us based on two pieces of good fortune. First, Niemöller was able on short notice to pack papers into his luggage when transferred from Sachsenhausen to Dachau. Then on 5 April 1945, when the Catholic priest, Michael Höck, was suddenly released from Dachau, he agreed to carry Niemöller’s “things” (“Sachen”) to safety (p. 39).

As Niemöller leaned toward the Catholic Church, it was based partly on his attraction to certain forms of piety in the Catholic faith. His primary concern, however, involved the role of authority. Niemöller was no fan of the tremendous variety of beliefs and emphases within the Protestant tradition, nor was he entirely comfortable with the fruits of modern biblical scholarship. Rather, he valued straightforward teachings of the biblical text. Writing to Elsa, Niemöller regretted about Luther “that in practical terms he abolished the teaching office of the church” (“dass er das Lehramt der Kirche praktisch abgeschaft hat”) (p. 43). He also envied the “apostolic succession” Catholics claimed on the basis of biblical authority, especially the text in which Jesus elevated Peter to a position of special authority.

It is clear that these pages in which Niemöller compared Catholic and Protestant teachings represented for him not just a personal inclination–plus his aversion to the wildly pro-Nazi theological claims of Deutsche Christen in the Kirchenkampf, of course. It also was his one effort to join the ranks of his theologian friends. He did so with some trepidation, not least because so many of his friends were such important theologians. Hans Asmussen, a prolific scholar and a close friend in the Confessing Church, stayed close to Elsa Niemöller as advisor and friend during Martin’s incarceration. Martin asked Elsa to seek Asmussen’s assistance and council and welcomed the chance to use Asmussen’s help. In May 1939, however, he also showed some recognition of his role as a beginner. As he wrote to Elsa, “Certainly Asmussen in my situation already would have written a thick book, or several” (“Asmussen hätte in meiner Lage sicher schon ein dickes Buch oder mehrere geschrieben”) (p. 29).

In fact, Elsa secretly worked together with Asmussen, Helmut Gollwitzer (another close friend and an assistant pastor in Dahlem), and Martin’s clergyman brother Wilhelm Niemöller to try to steer Martin away from his plan to convert. In all cases, they gave assistance and advice to Martin, but usually with small warnings or a nudge against Martin’s intended path. For Elsa, of course, the implications were the most pressing. She worried about financial considerations if Martin gave up his position and his career: “Then you can become a scavenger; and where are we left with the children? In that case we could not feed [or perhaps “support”, RPE] more than three” (“Dann kannst du Strassenkehrer werden; und wo bleiben wir mit den Kindern? Mehr als 3 können wir dann nicht ernähren”) (p. 12). During these months there were tears. There were requests that Martin promise not to make a hasty decision, or not to make a final decision without talking to her beforehand. After nearly two years of contemplation and indecision from July 1939 to the spring of 1941, Niemöller finally gave up on the idea of conversion. Christophersen and Ziemann describe various important reasons for this outcome, but conclude, “The real reason was the tenacity of his wife” (“Der wahre Grund war die Hartnäckigkeit seiner Frau”) (p. 22).