At Christmas 1940, Martin Niemöller appeared on the front page of Time Magazine as the “Martyr of 1940.” Since that same autumn, the film Pastor Hall, inspired by a drama by the playwright Ernst Toller, had been showing in American cinemas. It captured the story of the “Church Struggle” in Germany on celluloid, with little attempt to conceal Niemöller’s biographical details. Since his arrest in the summer of 1937 and subsequent transfer to Sachsenhausen concentration camp on the personal orders of Adolf Hitler, Niemöller had become a worldwide symbol of church resistance to the National Socialist dictatorship. Interest in his person continued even after his liberation at the beginning of May 1945. Despite the irritation that Niemöller provoked by making nationalistic statements in his first public postwar interview, he and his wife travelled to the United States for several months in 1946 and 1947, where he gave over 200 public lectures in 22 states. 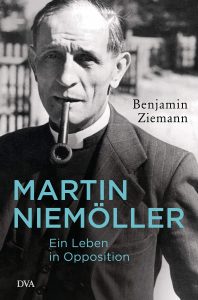 To this day, Martin Niemöller remains one of the most famous German churchmen of the twentieth century. He is regarded as an upright resistance fighter against Hitler, who testified to his stance with seven years of incarceration in concentration camps, as a preacher who admonished German “guilt” and as someone who had transformed from an imperial submarine commander of the First World War into a pacifist, who during the 1950s eloquently and powerfully opposed the Federal Republic of Germany’s Western alliance, its remilitarization, and nuclear weapons. Now, 35 years after Niemöller’s death in 1984, Benjamin Ziemann, Professor of Modern German History at the University of Sheffield and Fellow of the Royal Historical Society, cuts through the thicket of legend concerning Niemöller’s story and uncovers important strands of his life.

Born in 1892, Niemöller came from the home of a Westphalian pastor and chose the career of naval officer. Caught up in the national Protestantism of his time, he experienced the German defeat in the First World War as nothing less than a catastrophe. Only then did he decide to study theology, which he successfully completed in Münster. The book chapter on the völkisch and German national “student politician” is one of the most striking. Niemöller belonged to various far-right parties and associations such as the antisemitic German Nationalist Protection and Defiance Federation (Deutschvölkischen Schutz- und Trutzbund) and the National Association of German Officers (Nationalverband Deutscher Offiziere) and counted himself among the enemies of Weimar democracy. He also personally held, as Ziemann comprehensively proves for the first time, an aggressive attitude of racial antisemitism. As a father of several children and with his entry into civilian professional life, Niemöller became more moderate in the second half of the 1930s, but initially his political stance did not change. In 1931, after seven years as the organizer of the Westphalian Inner Mission, he moved to Dahlem, a well-to-do parish in Berlin’s southwest. Like many German nationalist pastors of his generation, Niemöller welcomed Hitler’s chancellorship, the “Third Reich,” and the emergence of a “people’s community” (Volksgemeinschaft) founded on Christianity.

Those disputes, which are treated today under the term “church struggle,” were crucial tests. As head of the Pastors’ Emergency League, founded in mid-September 1933, Niemöller became one of its most important protagonists in the second half of 1933 and gained importance throughout the Reich. Ziemann expertly describes the activities of Niemöller in the conflicts of the “church struggle,” accompanied by ecclesiastical, political, and personal tensions and breaks, and ascribes to him a key role in the debates of the Confessing Church concerning the inevitable consequences of Barmen Theological Declaration of the end of May 1934. He experienced the February 1936 division of the Confessing Church into a Dahlemite wing led by Councils of Brethren and a Lutheran wing led by regional bishops not only as a loss, but also as an opportunity for the (Confessing) Church.

His involvement, which led him to become increasingly opposed to the Nazi state and the growing state pressure on the church, ended abruptly on July 1, 1937, with his arrest. After a comparatively mild judgment by the Special Court at the regional court level, which would actually have resulted in his release, he was transferred directly to the Sachsenhausen Concentration Camp. In the detailed description of his concentration camp imprisonment in the almost fifty-page chapter on Niemöller’s time of suffering as the “personal prisoner of the Führer,” two themes stand out. One was the almost-two-year deliberation about conversion to the Catholic Church, which he only finally decided against at the urging of his wife, in February 1941, a few months before his transfer to Dachau. The other was the “empathy for communists and other victims of Nazi terror,” which Ziemann exposes as a subsequent self-stylization of the postwar period. Rather, he demonstrates an ongoing anti-Bolshevik and nationalist stance: “Even at the moment of liberation from the concentration camp, he interpreted the defeat of the German nation as the fall of the West” (p. 356).

Up to the 1970s, Niemöller remained a public figure and a noticeable and by no means uncontroversial voice in the social debates of the early Federal Republic. Ziemann goes into great detail about Niemöller’s disappointment at the development of the postwar Protestant Church, which he accused of episcopal and confessional tendencies and of supporting Konrad Adenauer’s policies, which he characterized as restorationist. Rooted in his understanding of a “prophetic guardian role” for the church, this went hand in hand with his keen criticism of the founding of the Federal Republic (“conceived in Rome and born in Washington”), the decision to ally with the West, and West German rearmament. Biographically, Niemöller’s sharpest break occurred at the end of the 1950s over the question of war and peace. Under the impact of the destructive force of hydrogen bombs, the former naval officer—who, despite his pacifist criticism of politics and the West German military, felt committed to the ethos of an officer throughout his life—became the most outspoken leader of the West German peace movement, in the campaign “Fight Against Nuclear Death” (“Kampf dem Atomtod”) and after 1957 as president the German Peace Society (Deutsche Friedensgesellschaft). Only then did Niemöller’s Protestant nationalist guiding principles wear off, which in the immediate postwar period were still expressed in nationalist speeches and manifest in his participation in the mythology of German victimhood. Ziemann’s portrait of the post-war Niemöller is extremely multifaceted, describing how Niemöller, increasingly shaped by international and ecumenical concerns, dramatically shifted his stance toward the church and underwent a political transformation.. Ziemann, however, does not lose sight of the continuities: Niemoller’s persistent unease (which he never completely abandoned) with representative party democracy and media diversity , his latent anti-Catholicism and anti-Americanism, as well as his persistent culturally and socially fueled antisemitic resentment.

Anyone interested in Martin Niemoeller’s eventful life cannot ignore Ziemann’s extremely rich, brilliantly written, critical, yet balanced account. In the controversial and polarizing person of Niemoller—the “volcano” Niemöller, as the Bishop of Württemberg Theophil Wurm once put it—he also depicts the fundamental conflicts that marked the four political systems of the late empire, the unpopular and defeated Weimar Republic, the National Socialist ideological dictatorship, and the Federal Republic, which was in search of new ways forward. Using the example of the “belated” pastor, the “church fighter” (“Kirchenkämpfer”), the church president of the postwar Hesse-Nassau Regional Church, and the internationally-recognized ecumenist, Ziemann also reflects the fundamental upheavals of twentieth-century religious life.

The strength of his biography is also a result of the fact that he does not stop at the public Martin Niemöller. Without committing any indiscretions, Ziemann writes about the strict “patriarch” and family man; the restless, often overwhelmed and driven worker; the impatient, polemical, and self-opinionated disputant who also offended those who were on his side; and, last but not least, the one who was challenged, who repeatedly suffered severe personal crises. And he writes about Else Niemöller, his wife who died in a car accident in 1961 and with whom Martin had been married for almost forty years. One of Ziemann’s great achievements in his publication is that he acknowledges her role as a discussion partner and advisor, editor of his sermons, emotional support during his term in prison, and, last but not least, as the one who took care of the family during Niemöller’s extremely time-consuming activities as an organizer of the Inner Mission, as a pastor, and as a church politician. Benjamin Ziemann’s Niemöller biography is already a standard work.