The ideals and experiences of the Bruderhof community have, perhaps inevitably, hovered in the background of histories of international religion in the early twentieth century. The inspired creation of the German internationalists, Eberhard and Emmy Arnold, much associated with the Hutterites and responsive to all forms of evangelical Protestantism, the Bruderhof offered a practical piety and a new vision of Christian authenticity. It sought to maintain firmly a principle of removal from the world and yet was constantly and perseveringly at large in that world, searching out new friendships, useful connections, and necessary alliances. Already in the 1920s, the community had become known to British Quakers working in Germany. It also found new friends and allies in the pacifist and internationalist circles which broke out after the First World War. It was a son of the Arnolds, Hardy, who provided the crucial link with Britain before 1933, preparing the way for the movement to set down new roots in foreign soil. The growing encroachments of the new National Socialist state – in particular, the compulsory conscription into military service – undermined the German Bruderhof by insistent degrees and in 1936 the two principal communities there were shut down, precipitating an exodus, through the Netherlands and across the English Channel, to a new home. 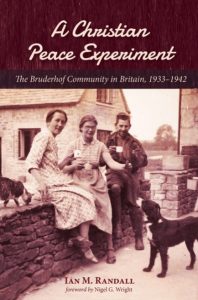 The suppression of the Bruderhof in Nazi Germany was not unobserved in Britain: there were protests and interventions by figures as diverse as the eminent Anglican laymen Sir Wyndham Deedes and the Baptist internationalist J.H. Rushbrooke. Friends of all kinds now proved effective, particularly in practicalities. By May 1936, the Bruderhof could be found in a farm near Ashton Keynes in the Cotswolds where a new community comprised sixteen Germans, fourteen British friends, and one Austrian. At the height of its quiet prosperity there, in October 1939, the community included as many as 119 Germans, 116 British members, 30 Swiss, 17 Austrians, and stray individuals from the Netherlands, Czechoslovakia, France, Sweden, Italy, and Turkey. All came with their own stories and for their own reasons. All sought to be useful. A miner from the coalfields of Durham cycled three hundred miles to join them and was promptly set to work picking potatoes; another new arrival was a Lancashire poultry farmer who was also a Methodist lay preacher and admirer of the Indian Christian mystic Sundar Singh. In choosing the Cotswolds, a deeply rural area which possessed something of the character of an English arcadia, the community chose well. Birmingham, the second city of the country and a bastion of Quakerism and Free church life and worship, was not far away. Ashton Keynes also had a railway station. Visitors and longer-term guests could come and go as they chose – and they did.

This book is especially valuable for showing the extent to which the whole venture at Ashton Keynes depended upon the kindness of strangers: the supportive Assistant Secretary at work in the Aliens Department of the British Home Office, the sympathetic estate agent at nearby Cirencester, the manager of the local building society, the local architect and builder, the many private benefactors and well-wishers. It was not only Quakers who found in the Bruderhof something of real spiritual and moral significance: Leyton Richards, the leading Congregationalist and minister of Carr’s Lane church in Birmingham, had from the earliest days in Germany proven an admirer and a steadfast ally.

In sum, for a few years there followed a brief flourishing, a great many activities, initiatives and meetings, a good deal of dairy farming, Bible reading, dancing and ‘sharing’, a manufacturing of what the British could regard as ‘arts and crafts’ products, an association with the Peace Pledge Union and other Christian pacifist organizations, a successful new journal (The Plough) and, increasingly, an adoption of other refugees from Nazism (twenty by December 1938). Children were born there and began to grow up. Inevitably, not everything went well and not everybody was happy. Local opinion could be sullen and resentful of expansion and there were skirmishes in the newspapers. One antagonist, a nearby farmer, was particularly belligerent. But the founding ideals could still be found alive and well. The representative of a national Jewish youth organization visited the Bruderhof and rejoiced to think that it was very like a kibbutz.

It was the war which challenged and then extinguished all of this. Local criticism grew more hostile and more bizarre. Then came internment. For marrying a German, one of the leading lights in the community, Freda Bridgwater, now found herself classified as an ‘Alien’: eight days after her wedding she was removed peremptorily by the police to the Isle of Man. The situation faced by the little community turned up in questions in Parliament and became a part of a vigorous national debate on internment altogether. In the midst of such pressures, the Cotswold Bruderhof lost its confidence. Complicated negotiations to find sanctuary across the Atlantic were soon underway; by the end of 1940 the first members of the community were arriving in Paraguay and the last members joined them in the following April. Even as the members departed, new enquirers and seekers turned up at Ashton Keynes, only to find much of the settlement now in the hands of the London Police Court Mission.

Something of the vision evidently remained even after its adherents had gone. Indeed, as Ian Randall observes at the end of the book, today the Bruderhof has over 2,900 members living in twenty-three international communities, most of them across Europe and North America. The rich archive of the movement is to be found in Walden, New York. The time is surely ripe for a gathering of these strands and the telling of this story.

This is an intricate, meticulous and compassionate book about the haphazard fortunes of communities of renewal and revival across the first half of the twentieth century; communities which sought separation from the world but remained caught up in its turmoil; communities which sought a new simplicity of life only to commit hours of labour to the complexities of adjustment, assistance and survival in a threatening world of totalitarian politics, international war, and social intolerance. For all these reasons, it certainly deserves a wide audience and a place on many shelves, both institutional and personal.