Review of Horst Junginger, The Scientification of the “Jewish Question” in Nazi Germany

Horst Junginger’s ambitious and weighty history of an exceptionally ugly aspect of Christian scholarship during the Third Reich begins with a dedication to a Jewish woman from Karlsruhe named Sophie Ettlinger. Ettlinger “accidentally” made her way into Junginger’s meticulous work of scholarship “because she possessed a typewriter with Hebrew letters that was of service to National Socialist ‘Jew research.’” The heartrending and galling narrative about Sophie’s fate (and that of her typewriter), to which we will return shortly, illuminates not only Judenforschung during the Third Reich, but also Nazi theft of Jewish property and, ultimately, the murder of six million European Jews. 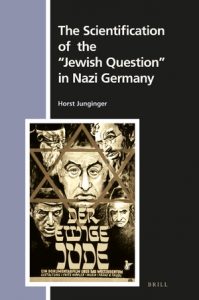 A few key conceptions and realities are at the forefront of Junginger’s study, which is a translation of a revised version of the author’s Habilitation thesis. First, the author seeks to demonstrate that Nazi-era “Jew research,” which purported to pose scholarly answers to the “Jewish Question” but in fact aimed at supporting anti-Jewish policies – was carried out at German universities in a manner that mutually reinforced religious and racial antisemitism. Thus, the book focuses on the religious aspect of modern antisemitism – even while recognizing with great care that “religious stereotypes coalesce with a racial explanation of the world” (ix). Second, the University of Tübingen’s centuries-long role as “an intellectual stronghold against Judaism” (x) culminating in its essential function as a locus of Nazi Judenforschung, is emphasized. Finally, theoretical and practical antisemitism converged during the Holocaust, as typified here by Junginger’s examination of the biographies of roughly a dozen war criminals who, the author demonstrates, were responsible for the deaths of several hundred thousand European Jews during the Shoah.

The book is presented in nine chapters. Chapters one and two set out the intellectual framework for the rest of the work, demonstrating how problematic were Nazi efforts to define Jews by means of their race or religion. The fact that baptismal records were a key means of identifying whether one was an “Aryan” or not speaks both to the crucial role played by the churches in this certification (and thus, by extension, the persecution, expropriation of belongings and property, ghettoization, and murder that followed for “non-Aryans”) and to the confusion brought about by the Nazi classification system. Junginger notes astutely, “National Socialist laws and their accompanying political commentaries could concentrate on blood and genealogical succession as much as they liked; apart from religion the state had absolutely no other means to ascertain the race of its citizens” (7).

Chapter three traces the history of the University of Tübingen’s long and tortuous history as a place of exclusion for and condemnation of Jews and Judaism. A key consideration here is how such ideas survived into the post-Enlightenment and post-emancipation eras. Junginger finds the answer, in part, in the work of the social historian Jacob Katz, who argued that, even in a far less religious epoch, Christianity was still a defining aspect of the European outlook. The pre-modern image of “the Jews” metamorphized “into a seemingly rational one” (68). Yet, even in the modern era, lingering and “antiquated” Christian prejudices still contributed to a multifaceted post-emancipation antisemitic milieu.

In chapter four, Junginger demonstrates that the University of Tübingen’s institutional bias against Jews and Judaism did not reverse during the era of the Weimar Republic, which he calls “the zenith of Jewish emancipation.” Quite to the contrary, and despite the fact that the Weimar constitution guaranteed full civil rights and access to civil service employment for all, regardless of religious affiliation, the university consciously undermined such a policy so thoroughly that, when the Law for the Restoration of the Professional Civil Service came into effect in April 1933, the university had the lowest quota of dismissals of any German university. While other reasons for this include the national malaise in the wake of the First World War, Junginger places greater emphasis on Tübingen’s centuries-long “all-encompassing nationalist Protestant consensus,” which included antisemitism (111).

Chapter five deals largely with the case of Gerhard Kittel, who became Chair of New Testament Studies at Tübingen in 1926. Thanks to the work of scholars like Max Weinreich, Robert P. Ericksen, Alan Steinweis, and Anders Gerdmar, Kittel is now a well-known and notorious case of Protestant scholarship in service of the Nazi regime, including its anti-Jewish policy. Still, Junginger’s deep dive into both primary and secondary sources offers the reader some new or lesser known aspects of Kittel.  One is the revealing and harrowing account of a Jewish scholar named Charles Horowitz (1890–1969). In March 1928, Gerhard Kittel applied to the Notgemeinschaft der Deutschen Wissenschaft (Emergency Association of German Science) for funding of a planned collection of rabbinic texts. In his application, Kittel stressed how vital the participation of young Jewish scholars would be. The project was approved and funded handsomely (122).

As one of the Jewish scholars hired for the project, Horowitz began working in the winter semester of 1930–1931. While working at the Hochschule für die Wissenschaft des Judentums (College for the Study of Judaism) in Berlin, Horowitz collaborated during the early 1930s on the Theologisches Wörterbuch zum Neuen Testament (Theological Dictionary of the New Testament), which was edited by Kittel. He apparently received no remuneration for this work. Horowitz also translated the Talmud treatise Jeruschalmi and proofread the Talmud references in Adolf Schlatter’s commentaries during this period. For his work overseeing a small working group for rabbinic texts in the summer of 1930, work which continued until March 1933, he received the paltry monthly stipend of 25 Reichsmark (124).

In April 1933, just two months after Hitler came to power, Kittel notified the rector’s office that Horowitz’s salary would be discontinued immediately, adding in June that Horowitz’s work as a tutorial assistant was to be taken over by Karl Georg Kuhn (1906–76) after Horowitz’s “retirement.” Just a few days before Horowitz was summarily dismissed, Kuhn had held the official boycott speech for the Nazi Party on Tübingen’s market square. Even before the National Socialists came to power, Horowitz had been the target of antisemitic hostility in Tübingen. He often found menacing letters and antisemitic notes on his desk and all of his documents were stolen from his study (125).

Horowitz’s misery would only increase, of course, with the onset of Nazi rule. Not long after his dismissal from work at Tübingen, he and his family fled to Amsterdam and then, in 1937, to Dijon, France. After the German invasion and occupation of France, in 1941, the Horowitz family fled across the demarcation line to Valence. Despite taking every precaution, including moving from place to place, in August 1942 Charles’s wife Lea was arrested and deported after a denunciation. While Charles and his children barely survived the war and the Shoah, Lea was murdered in Auschwitz (125-126).

Chapters six through eight cover the efforts of Kittel and like-minded others to transform existing confessional studies about Judaism into purportedly scholarly antisemitic studies; the extent to which such efforts were effective; the conversion of such theoretical studies into concrete action directed against Jews (that is, ghettoization, theft, violence, and murder); and the “ultimate consequences” of the antisemitism theorized at Tübingen but promulgated and executed throughout Europe during the Holocaust – that is, the aforementioned hundreds of thousands of murders carried out and/or ordered by war criminals influenced by their studies at Tübingen.

Among other things, we learn in these three chapters how Kittel was called upon in 1942 to give an expert opinion in the show trial of Herschel Grynszpan, the desperate, stateless Polish Jewish teenager who fatally shot German Legation secretary Ernst vom Rath in November 1938, an event that was used as the pretext for the Reich pogrom that began on November 9 (261ff.) and that Kittel provided both written materials and ancient Jewish caricatures for the notorious antisemitic propaganda exhibition called “Der ewige Jude,” which ran initially in the German Museum in Munich from November 1937 to January 1938 (230-231).

Though these three chapters offer a dire array of examples of words and deeds offered up by the purveyors of antisemitic Judenforschung during the war and the Holocaust, perhaps no example ties the threads of the study together quite like that of the aforementioned Sophie Ettlinger. In keeping with the increasingly common Nazi practice of theft of Jewish goods and property (made legal ex post facto) Sophie’s brand-new, very valuable portable typewriter – which contained Hebrew letters – was stolen and offered by the Reich Ministry of Education for sale to the University of Tübingen in September 1941. Though the rector at Tübingen replied favorably a few weeks later, noting that both the “research unit on the history of Judaism” and its Protestant faculty of theology would find the typewriter very useful, he received disappointing news, as it had been sold instead to the Frankfurt-based Institute for Research on the Jewish Question, whose head was Wilhelm Grau. Junginger notes the irony that an official Nazi organ for antisemitic research would thus take possession of the stolen (and re-sold) typewriter rather than “Judenforscher” Karl Georg Kuhn or another member of the faculty of Protestant theology at Tübingen.

Together with several family members, Sophie Ettlinger had been deported in October 1940 to the Gurs internment camp. Between August 5 and September 1, 1942, four deportation trains left Gurs for the extermination camps in the East, with a stop at the transit camp at Drancy along the way. Sophie was present with the more than 2,000 Jews from this group that went to Auschwitz, where Sophie was murdered (258-259).

The concluding chapter recapitulates the main emphases of the work but also reminds readers that most of the war criminals discussed in chapter eight—all of whom had significant ties to the University of Tübingen and/or its Jewish research unit and had blood on their hands by way of direct participation in the murder of European Jews—either received light jail sentences or had their sentences later reduced, enabling them to live the rest of their days in freedom and comfort.

Junginger’s work illuminates how the University of Tübingen, especially those members of its Protestant faculty of theology involved in research on the “Jewish Question,” made key contributions not merely to a broadly antisemitic atmosphere in Württemberg but to the murder of hundreds of thousands of European Jews during the Holocaust. While historians and scholars of religion will find it particularly useful, patient lay readers, too, will benefit from its sophisticated but clear argument about the nexus between antisemitic words and deeds in Nazi Germany.