This review was originally published in theologie.geschichte, Bd. 13 (2018) and is reprinted with the kind permission of the publisher. The original version can be found here.

The volume is a collection of chapters on the roles of individual clergymen during the Nazi regime in the Protestant church of Saxony. It is a fairly specialized study for those concerned with regional church history in what in Germany is called Kirchliche Zeitgeschichte. This branch of church history focuses on the twentieth century, with a particular interest in the impact of the Third Reich (though the field has over time widened in scope and perspective). The aim of this volume is to introduce the biographical-professional pathways, political choices, and theological justifications of men working in the church of Saxony in the 1930s and 1940s. The research is based on the evaluation of new archival materials, and all the case studies follow a consistent framework. They show the spectrum of positions these men took during the Nazi regime and the Kirchenkampf (church struggle), from the moment Hitler took power and the Nazification of German society to the outbreak of World War II and its end in 1945. They also situate each of the clergymen in their family histories and theological training before 1933, followed up briefly by notes on their personal and professional lives after 1945, including the de-Nazification process and accommodations with the new East German socialist government. 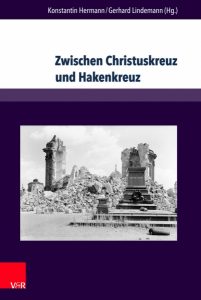 Commendably, the editors cover the various levels of complicity and resistance in their selection of biographical reconstructions. They do so systematically by dividing the volume into four parts. The first and longest part introduces the biographies of clergymen who embraced Nazi ideology and identified with the Deutsche Christen – the “German Christians,” a group within the Protestant parishes that saw no contradiction between Hitler and Luther, between Nazi ideology and church teachings (Knabe; Münnich; Coch; Fügner; Bohland; Axt). The second part covers four men belonging to the so-called “Mitte,” the center, who tried to walk a middle path between radicalized and Nazi-supporting clergy and those who opposed the Nazi takeover of church and society (Herz; Bruhns; Loesche; Gerber). The third and shortest part introduces two biographies of men of the Confessing Church (Bekennende Kirche), who prioritized faith in Christ over nationalist and völkisch ideologies and (partially) resisted the Nazi regime (von Kirchbach; Delekat). The last part documents the biographies of churchmen who were persecuted by the Nazis for political and racial reasons, including Protestant ministers who were classified as Jews (or mix-blooded) by the 1935 Nuremberg Laws (Stempel; Kaiser; Gottlieb; Starke; Grosse).

The volume’s internal structure – from Nazi sympathizer to active resistance – guides the reader well through the many choices these clergymen made and the degree to which they used their clerical authority to position themselves vis-à-vis a dictatorial regime. What, in hindsight, looks like an unambiguous verdict – after all, how would any Christian minister be able to support a racist, murderous, and genocidal regime? – turns into a more complicated maze of decision making, career ambitions, and ideological convictions when examining how biographical motivations intersect with political developments. Given the longstanding German tradition of fusing Lutheran theology with national aspirations, many believed that Hitler would revitalize the Protestant churches and strengthen the German nation against common foes: secularization, Bolshevism, and those responsible for the Versailles Peace Treaty. Such expectations enticed clergy to join the Nazi Party and the Deutsche Christen (DC). Some held on to both memberships, others left the DC but not the NSDAP; some moved from the DC to the Confessing Church over time, others joined the German army as military chaplains. Yet others never affiliated with any of these groups because they identified with religious-socialist circles or the political party of the Social Democrats. It is worth delving into the continuities and discontinuities we see played out in these individual biographies.

As a reviewer, it is tempting to introduce some of the characters by name and to follow their life stories within the church environment of Saxony. However, for readers unfamiliar with the particulars of Saxony’s regional church administration and struggle, the amassed archival details of each chapter would quickly overwhelm. Experts in church history will have, no doubt, an easier time in grasping the significance of certain names and nuances, and they will welcome this volume as an addition to the literature on the German church struggle. Yet, not only specialists should read Zwischen Christuskreuz und Hakenkreuz, a point I will return to at the end.

A few areas of concern need to be mentioned for they weaken the otherwise meticulous research presented in this volume.

More help could have been provided to the reader to make sense of the many historical details mentioned in the chapters. At times, the biographical material is just a long list of data; this is especially true for the men’s family histories and their university studies and early career pathways preceding 1933. Though the contributors claim that this information is important to understand their subjects’ later choices, this is not always evident. More explicit interpretative models would have been useful. The criticism that Philippe Lejeune once voiced against autobiographical prose can apply here to some degree. Autobiographers, Lejeune lamented, sometimes write as if they fill out a “questionnaire sent by a punctilious administration.”[1] The copiousness of biographical data does not automatically contain explanatory power.

More help could have also been provided for weighing the significance of particular choices and attitudes. How should we assess, for example, someone’s genuine Heimatliebe (love of one’s home-nation) when it goes hand-in-hand with anti-Jewish resentments (as in the case of Oskar Bruhns with his Baltic-German roots and völkisch identification)? How should we distinguish between an ambitious career move and membership in the NSDAP? Some chapters offer clear assessments, but generally the volume errs on the side of caution.

A few of the contributors are too close to their subjects, with the result that they lose critical distance and present them with undue loyalty. Generational affinity might be one reason for this shortcoming (the contributors’ birth years range from 1929 to 1988). This is especially the case for contributors born before 1945. Their own linguistic style (Sprachduktus) occasionally resembles those of their subjects – and those styles carry embedded value references. This is true, for example, for the issue of gender and gender relations. Wives and children of the churchmen are mostly introduced as an aside, such as in the case of the death of von Kirchbach’s wife after his return from World War I, which is commented with the laconic entry: “He left in good care his children, eight and six years old. For him now, the decision to study theology was firm” (208).[2] Another example is the cavalier way of commenting on behaviors questionable by today’s standards, such as the beating of students for educational purposes: “In extremely rare cases it is told that emotional stress apparently led him to slap [his students]” (313).[3]

There is also little discourse analysis of the theologians’ autobiographical writings that were consulted for this study. This lack is particularly glaring with respect to self-exculpations during the de-Nazification process (Selbstreinigung) after 1945. Ego-documents often require a reading between the lines, listening not only to what is said but also to how it is said and what is not being said, and to paying attention for the less obvious elements of emotionality, narrative patterns, and omissions.

Related to these issues is the absence of the Holocaust in the presented biographical reconstructions. Anti-Jewish tirades and antisemitic stereotyping as well as the Arierparagraph and the case of pastors of Jewish origins find mentioning in the chapters, but the Holocaust itself is largely absent. It might very well be that the archival materials do not contain any such references, but this silence in the documentation should have been addressed and problematized.

17 of the 18 churchmen introduced in this volume were born between 1877 and 1895, 12 of them between 1882 and1890 (with one outlier who was born in 1906[4]). Little is done with the opportunity to study these men as members of the same generational cohort, the 1890ers (born between 1870 and 1890).[5] This political-generational cohort shared identifications and worldviews that united them beyond their individual biographies. These men lived through a number of political dreams and upheavals, from the Wilhelmine era to the end of the Kaiserreich, from colonial ambitions to the end of imperial dreams after World War I. It was a time characterized by social tensions between workers, industrial capitalism, and the middle class. These themes (especially World War I and the attempts at re-binding the working class to the church) appear frequently in the chapters, but they are not woven into a more cohesive instrument of interpretation.

Finally, what works well for this volume – namely the ordering of the biographies according to the conventions of contemporary church history (Deutsche Christen – the Center – Confessing Church – persecuted theologians) – is also a limitation. This framing follows a progression from most complicit with the Nazi regime to least complicit. This makes sense. Yet, its reliance on a well-worn traditional framework, which categorizes individual choices along the organizational venues of the Kirchenkampf, strains the possibilities of assessing culpability and complicity differently. What if we were to apply to the biographies of Protestant clergy and theologians more fine-tuned categories of culpability, such as perpetrator, accomplice, opportunist, enabler, bystander, beneficiary, victim? What if we read the archival material through an analysis of power and male agency? What if we foregrounded in these biographies the question of male subjectivity in the gray zone of moral and political choices and opportunities? An analysis of levels of culpability might compel us to reconfigure the historical and ethical assessment of these men’s choices, and this might be particularly relevant for the men of the Mitte (center).

A volume like Zwischen Christuskreuz und Hakenkreuz cannot accomplish all these tasks or satisfy these desiderata; the concerns raised above merely indicate how detailed historical research can be expanded and enriched. The two volume editors write in their brief and solid introduction that “the political agenda of the NSDAP found wide and positive resonance in [German] Protestantism.” Among the reasons for Christians supporting the Nazi party, they list the following: rejection of the “Versailles Peace Treaty of 1919, the strengthening of the state, measures to increase employment, [securing] of national borders [Volkstumsgrenzen],…legal discrimination of Jews,…fears of Bolshevism and also discontent with a pluralistic society” (10).  If we were to replace some of the historical references in this passage with contemporary political agendas, a number of countries would come to mind where politicians currently stoke fears and hate – with the support and vote of large numbers of Christians. Replace the Versailles Treaty with the Paris Agreement of Climate Change, Volkstumsgrenzen with national border security, legal discrimination of Jews with legal discrimination of immigrants, or Bolshevism with Islam, and we find ourselves in the midst of Trump’s America and Orbán’s Hungary. As illiberal democracies spread, are Christians today any better prepared to resist than the Protestant theologians in the church of Saxony in the 1930s? This is why the book, Zwischen Christuskreuz und Hakenkreuz can and needs to be read by people beyond a circle of specialists.

← Conference Report: Lessons and Legacies XV, The Holocaust: Global Perspectives and National Narratives
Review of Horst Junginger, The Scientification of the “Jewish Question” in Nazi Germany →