This is a biography of a little-known figure in the German church, Pastor Wilhelm Wibbeling, a Reformed pastor and church leader in the church of eastern Hesse. Wibbeling’s life and career spanned what the title accurately describes as “the age of the extreme,” and author Peter Gbiorczyk relates this life story on the much larger stage of the theological, political, and ideological movements, divisions, and debates that shaped twentieth century German church history. 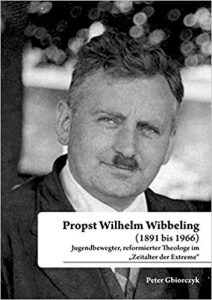 Wibbeling had just completed his theological examinations and practical training for the ministry when the First World War began. He fought, eventually becoming an officer, married shortly after the war ended, and was ordained in 1919. His subsequent career showed his lifelong commitment to the renewal and stability of his church as well as his own strong social-political convictions. His political leanings were socialist. He began his ministry as a youth pastor in the coal-mining town of Bochum in the Ruhr valley, where he reached out to working class, Catholic, socialist, and other youth organizations in the region, creating a coalition that focused especially on the problems of alcoholism among youth. A non-church colleague described him in those years as someone “who didn’t act like a pastor at all, avoided church language and was familiar with and understood the socialist movement.”

By the early 1920s Wibbeling had become part of the Neuwerk Bewegung, which he later described as a movement emerging from the “stormy aftermath of the First World War,” the goal of which “was a decisive breakthrough … toward a reshaping of our entire life.” The focus was social renewal and church reconciliation; the context was the Protestant church. Early leading figures in the movement included pacifists like Eberhard Arnold, who went on to found the Bruderhof movement. The Neuwerk group was one of many church, social, and political movements in interwar Germany, and this book gives an in-depth portrait of Protestant engagement in these different groups and the role played by theologians like Karl Barth, Günther Dehn, and Paul Tillich.

Wibbeling served several small parishes during the 1920s, working with a population that was working class and decidedly anti-church (a member of his church council warned him that “if Jesus himself were to preach, there still wouldn’t be anyone coming to church.”) In the village of Hellstein, where he served from 1928 to 1932, the population’s politics were evident in the Reichstag elections of September 1930, in which over 40 percent of the vote went to the Communist party (with ca. 12 percent going for the Nazi party and 35 percent for the Social Democrats). From 1932 to 1945 he served in Langendiebach, a village of around 1000 people near the town of Hanau. The political demographics were similar to those of his previous parish: 51 percent of the population voted for the Social Democrats in the March 5, 1933, Reichstag elections (as compared to 18 percent nationally) and 15 percent for the Communists (compared to 12 percent nationally). The Nazi party received 28 percent of the local vote. Despite the fact that Wibbeling fit right in as a Social Democrat, his application for the pastorate initially met with resistance from the parish council itself, indicating the gap between the political demographics within the church and those of the broader populace. On March 23, 1933, the Social Democrat mayor of Langendiebach was ousted and replaced by a Nazi. Shortly thereafter, Pastor Wibbeling joined in the wider church struggle in the German Protestant church. A local chapter of the Deutsche Christen formed, and the national battles about the church Aryan Paragraph and the Reich bishop election began to unfold on the local level. In November 1934 Wibbeling led his parish to join the Confessing Church and became a member of the regional Confessing Bruderrat.

Wibbeling became drawn into the ongoing battles of the church struggle about youth work, pulpit proclamations, and church governance. Although he came under Gestapo surveillance for his Confessing Church activities, he doesn’t seem to have become more broadly engaged politically, and there was a marked contrast between his more outspoken statements and his actual record. The chapter on the persecution of the Jewish citizens and political opponents (including the arrests and imprisonment of prominent Social Democrats) in Langendiebach is a scant nine pages, and while it thoroughly documents what happened in the village there doesn’t seem to be any record of Wibbeling’s taking a public stand. In 1936 he was visited by Elisabeth Schmitz, who gave him a copy of her memorandum about the persecution of the Jews; in 1947, in fact, it was Wibbeling who signed the affidavit that she was indeed the author of the memorandum. At the time Schmitz was trying to mobilize the Confessing Church to protest the anti-Jewish measures, yet there is no indication that Wibbeling brought the matter before the regional Bruderrat. Similarly, there’s no record of Wibbeling being directly engaged on behalf of the 39 Jewish residents of Langendiebach, most of whom emigrated. After 1939, a heart condition kept Wibbeling out of active military duty and he spent most of the war focused on church youth work and regional Confessing Church politics.

After the defeat of Nazi Germany Wibbeling was soon drawn into the debates about denazification. He was outspoken on the issue: after a June 1945 memorandum to the pastors of the Kurhessen-Waldeck regional church announced the need to eradicate the “National Socialist remnants” from the church, Wibbeling responded caustically that many of those still serving in the church leadership, including its president, had been Nazi party members and had signed the 1939 Godesberg Declaration, which sought to “de-Judaize” the church and create separate congregations for Christians of Jewish descent. “Whoever was co-responsible for these decisions is among the remnants that now should be eradicated,” he wrote, and he argued that anyone who had been a member of the Nazi party or the German Christians should be removed from the ministry.

Wibbeling’s stand became part of the wider postwar debate among Protestant leaders about denazification, and this section is certainly one of the most detailed and interesting accounts in the book. Wibbeling became provost of the church district in 1946 and chaired the Hanau denazification commission for church employees (including not only clergy but deacons, organists, and religious educators). Clergy who had been party members (and those sympathetic to them) argued that only those who had failed to fulfil their pastoral obligations and “acted against scripture and confession” could be removed—i.e., that their political views per se were no criteria for removal from office. (This of course undermined the very purpose of denazification.) A striking number of those who came up before the Hanau denazification board had been members of the German Christian movement before joining the Confessing Church.

Most of the clergy who came before the Hanau denazification commission were pushed into early retirement but were able to retire with their pensions; the outcomes of denazification were more severe for non-clergy church employees, many of whom were suspended or fired. The case of Pastor Bruno Adelsberger illustrates the church’s passivity on the matter. Adelsberger was an early Nazi party member and avid German Christian who was described as a “notoriously zealous agitator” for Nazism who supported the “dejudaization” of the church. Unrepentant before the denazification board, Adelsberger was told that he could not remain in his parish but would have to apply to another parish for a position “independently,” and the matter of any further disciplinary action was turned over to the bishop. The bishop decided not to pursue the case, Adelsburger found a parish willing to give him a position, and so he remained in the ministry until he retired in 1967.

The remainder of the book chronicles Wibbeling’s postwar career until his retirement. Like others on the Protestant political left he became involved in the debates about the Cold War and the antinuclear movement. He also spearheaded local initiatives to address the Nazi past, and in 1961 led efforts to create and dedicate a memorial site where the Jewish synagogue in Hanau had stood, joining with the rabbi of Hesse, Isaak Emil Lichtigfeld. Wibbeling received the Bundesverdienstkreuz, Germany’s highest civilian honor, in 1961 and died in 1967.

Only about 200 pages of this book are devoted to the Nazi era, and while Wibbeling emerges as an intriguing and often outspoken figure, in much of the book he is treated almost as a minor player over against the major historical events of his times. In contrast, there are extensive descriptions of the Neuwerk movement and the political debates of the 1920s such as the 1926 plebiscite calling for the expropriation of property belonging to the former ruling nobility, which drew much support in the working class regions where Wibbeling worked. The result is a remarkably exhaustive portrait of working class Germany and of Protestant church life in such circles, giving an unusual vantage point for the events of the interwar period and the German church struggle between 1933 and 1945. The treatment of the postwar political issues and the debates of the 1950s is equally thorough. This book’s real value may be in its wealth of detail about this sector of German life and society during the first six decades of the turbulent twentieth century, as a backdrop for understanding the events in the Protestant churches.