This book is a collection of short chapters by Protestant clergy, lay leaders, journalists and public intellectuals on the fraught relationship between Christianity and Alternative for Germany (AfD), a right-wing populist party that has gained significant momentum in state and national elections since its founding in 2013. The editor and most contributors argue that the AfD and Christianity are fundamentally incompatible, though they also recognize that church members are attracted to the party and its program to roughly the same extent as the broader population. For this reason, they recommend dialogue with AfD supporters and sympathizers, though always with the goal of limiting its impact in church and society. 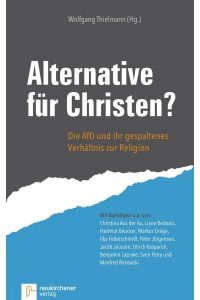 Among the incompatibilities cited by the authors are the AfD’s denigration of vulnerable groups (especially migrants and Muslims), its insistence on a homogeneous German Leitkultur, its political strategy (deliberate provocations and insults, distortions and “alternative facts,” manufacturing or intensifying anxieties), and its invocation of Christianity as an element of national identity rather than a universal faith and system of values. Nevertheless, they recognize that individual Christians have played a key role as founders and leaders of the party (including Frauke Petry, Bernd Lucke, and Konrad Adam on the Protestant side and Jörg Meuthen on the Catholic side). The group “Christen in der AfD” is another indicator that the party has made inroads among Christians, though very few pastors and priests have endorsed the AfD and many have been outspoken in their opposition.

The contributors’ calls for dialogue take different forms. Pastor Ulrich Kasparick of Hetzdorf (Uckerland) stresses the need for outreach to rural parishioners who rely on the internet and social media for much of their information about the wider world. Pastors and church councils must use those same channels to counter AfD positions and explain where they transgress Christian norms. Pastor Sven Petry (formerly married to Frauke Petry) argues that church leaders should listen to the concerns of Germany’s Wutbürger (enraged citizens) even as they challenge the misconceptions and scapegoating promoted by the AfD. Christina Aus der Au defends the decision to invite Anette Schultner (leader of the group “Christen in der AfD”) to participate in a panel discussion at the Protestant Kirchentag in Berlin and Wittenberg in 2017. Aus der Au, who served as president of the Kirchentag that year, appeals to the example of Dietrich Bonhoeffer, for whom the highest priority was not looking heroic, but the survival of the coming generation. It would be better, she argues, for Christians “to get their hands dirty than to wash them in innocence” (83).

Of course, dialogue does not mean moral relativism, nor does it mean that an opponent’s views will go unchallenged. Superintendent Ilka Federschmidt (Wuppertal) welcomes a clear “no” to the AfD on the part of the churches, but like Kasparick she sees a need for ongoing dialogue and active engagement with church members who lean toward the AfD and its agenda. Law professor Jacob Joussen, an elder at the Bonhoeffer-Gemeinde in Düsseldorf, weighs the options available to lay leaders if a member of a church council declares allegiance to the AfD (as Hartmut Beucker did in Wuppertal in 2017). Joussen could find no legal justification for excluding or removing an elder based on party affiliation but argued that non-AfD parish leaders had an obligation to wage a vigorous and public campaign against the ideas of their wayward colleague if such a case were to arise.

The book also makes room for two prominent AfD voices via Hartmut Beucker’s essay “Warum ich für die AfD kandidiere” and a partial transcript from the 2017 Kirchentag, in which Anette Schultner squared off against Bishop Markus Dröge (Berlin-Brandenburg-Schlesische Oberlausitz) and journalist Liane Bednarz. Both Beucker and Schultner are fairly predictable in their opposition to “uncontrolled” migration, “Islamization,” abortion, and gender mainstreaming as well as their promotion of tighter restrictions on immigration, defense of the “Jewish-Christian foundations” of German culture, and “traditional” families. Equally noteworthy is their invocation of the fifth thesis of the Barmen Declaration to argue that the churches should steer clear of politics (i.e., criticism of the AfD), along with their strategy of representing themselves and their party as the true victims of intolerance, hatred and hysteria. When asked to comment on those who feared the AfD because its proposals threatened to restrict their rights, Schultner avoided answering directly and instead accused those who were frustrated over the existence of the AfD of being “undemocratic” (187).

Among the limitations of the book are its lack of historical depth and its minimal engagement with a growing body of research on populism, far-right political parties, and their points of connection with religious communities and identities. Also regrettable is the lack of Catholic contributors and the tendency of several of the Protestant authors to congratulate themselves for wading into the morass of dialogue, unlike their principled but risk-averse coreligionists who had refused to give AfD members access to the podium at the 2016 Katholikentag in Leipzig. A third issue, though admittedly unavoidable in such a work, is that some of the information it relays is quickly outdated. For example, Anette Schultner abandoned the AfD in October 2017, only a few months after defending it at the Kirchentag, because in her view extremists had taken over the party. In May 2018, AfD representative Volker Münz was allowed to speak at the 101st Katholikentag in Münster.

Despite these drawbacks, the book is a fascinating source for contemporary church historians in that it shows German Protestants (in the larger regional churches as well as the smaller free churches) reflecting on and responding to right-wing populism in real time. Though the players and the circumstances are different in many respects, one cannot help but contrast the nearly unanimous opposition of church leaders to the AfD with the collaboration or complicity of church leaders during the Nazi era. Equally important are the ways in which that earlier history serves as a reference point for contemporary antagonists as they frame the debate and define their positions within it.