This is a revised and expanded edition of Katrin Rudolph’s study of Franz Kaufmann and the “Kaufman Circle” that first appeared in 2004. The Kaufmann Circle was a small resistance group in the early 1940s with ties to Martin Niemoeller’s Confessing parish in Dahlem. Its primary members were Kaufmann, Helene Jacobs, Gertrud Staewen, and a Jewish artist, Cioma Schönhaus, who forged documents such as identity papers and food ration cards that helped Jews live underground in Berlin throughout the war. Kaufmann came from a Jewish family but was a baptized Protestant in a “privileged” marriage. When the Gestapo uncovered the group’s activities in 1943 Kaufmann and Jacobs were arrested (Staewen avoided arrest), and Kaufmann was murdered in Sachsenhausen in 1944. Schönhaus made his way to safety in Switzerland, later publishing an account of the group’s activities, published in English as The Forger. Jacobs and Staewen both published short postwar accounts and gave numerous interviews. (I conducted interviews with both women and wrote about the group in my first book, For the Soul of the People.) 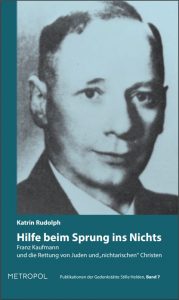 As Rudolph notes in her introduction, however, recent research has yielded new information about the group and important corrections to the earlier accounts (including those in my book), revealing a number of connections between Kaufmann and other people in Berlin who were attempting to help Jews. These findings have altered her understanding of how the Kaufmann group operated, and in this new edition she argues that there was not a distinct and independently operating “Kaufmann circle” but rather a wider network of “small alliances of helpers” who were loosely connected to Franz Kaufmann. This study therefore broadens our view of the group’s activities beyond the immediate circle around Kaufmann and explores the wider dynamics and patterns of assistance to Jews in wartime Berlin. Rudolph has also examined and corrected discrepancies in some of the postwar accounts, and her book serves as a critical study of how postwar narratives about rescue emerged.

Rudolph begins by tracing the emotional and social effect of Nazi anti-Jewish legislation on the people of Berlin beginning in 1933, including the initial bewilderment and denial among the highly assimilated Jewish population in suburbs like Dahlem, as well as the shamefully quick compromises of the vast majority of Germans, who turned on even longstanding Jewish friends and colleagues. A significant percentage of those considered “non-Aryan” under Nazi racial laws—perhaps as many of 300,000 of the 800,000 affected by these laws—had Jewish family background but were either secular or had “assimilated” through conversion (i.e., baptized Christians), and about two-thirds of this population was Protestant. The Protestant debates about the applicability of the “Aryan Laws” to church members was the issue that launched the church struggle in 1933, and Rudolph helpfully traces the context of the wartime rescue initiatives back to these early beginnings.

Many of the Confessing Christians who became most politically active in helping those affected by the Nazi racial laws came out of the early radical “Dahlemite” wing of the church struggle, and the Dahlem parish was a quiet center of connection and communication about other developments. While baptized Christians and people in privileged marriages initially remained more sheltered from the worst of the Nazi anti-Jewish measures, their situation grew more precarious over the course of the 1930s, particularly after the November 1938 pogroms; during this same period, Confessing Church leaders showed a growing reluctance to stand up for them. In 1938, with the approval of the Nazi regime, an office was established by Pastor Heinrich Grüber to assist the emigration of “non-Aryan Christians”; Grüber and his co-worked helped between 1500 and 2000 people emigrate before the regime shut the office down in 1940. The situation intensified dramatically in October 1941, when all further Jewish emigration was banned. All Germans affected by the Nazi racial laws had to wear a yellow star in public and the deportations of Jews from Berlin began.

Franz Kaufmann was among those affected. He had been a lawyer in the finance ministry until his dismissal in 1935, after the Nuremberg Laws. After that he lived on a modest pension and sought to emigrate, applying to the Quakers for help in reaching the United States and to ecumenical contacts in hopes that he could go to Switzerland. Tragically, both avenues failed him, and his ties to the Dahlem parish deepened in the early years of the war. As the plight of Jews in Berlin worsened, Kaufmann decided to use every means and connection he possessed to help them. He reached out to old contacts who were still in the government or whom he thought might be able to offer financial support for rescue efforts, in the process taking risks that may have exposed others. After his arrest he told his interrogators that “perhaps out of an inflated sense of responsibility, I felt called to help people who turned to me in need, fear and despair and, as it turned out, to help them with unreliable means.”

It is difficult to know whether such risks were what eventually led to the denunciations that led the Gestapo to Kaufmann and the others, but it’s clear that his initiative and his efforts made him the center point for a wide-ranging network of people in Berlin who were trying to help Jews, and in the aftermath many of them defined their connection to the underground resistance in terms of their relationship to Kaufmann. In addition to a few individuals who had worked with Grüber office and members of the Dahlem church like Jacobs and Staewen, this network included several individual Confessing pastors in Berlin whose parsonages and parishes became places of assistance: Catholics like Max Josef Metzger and Margarete Sommer, members of the Solf resistance circle, and a broader network of parsonages in Berlin and the Württemberg Confessing Church (Kirchliche Sozietät) that began to serve as an underground railroad for Jews trying to reach Switzerland (related most famously Max Krakauer’s account of his own rescue, Lichter im Dunkel). Included as well are more ambiguous figures who assisted in rescue but for ulterior motives or for payment. Rudolph has concluded that Kaufmann was involved in four distinct rescue groupings, only one of which was the Dahlem circle that has been associated with him to date, making him “synonymous with illegal assistance for those persecuted.”

There is much new material in this book not only about the different members of the resistance but the identities and fates of those who were helped. The wealth of detail, corrections to previous accounts, and focus on the intersections between the different communities is sometimes difficult to follow, but by situating the story of the Kaufmann circle in the larger context of the Confessing Church debates and the different Berlin rescue networks and individuals, Rudolph has provided a real service for those of us who seek to understand this period in its full complexity, and some important new insights into this history as it unfolded in wartime Berlin.