By Sarah Thieme, University of Münster

John Carter Wood has edited a volume which considers religion and its impact on politics, more precisely, the relationship between Christianity and “national identity” and the discourses about this interaction in the “long” twentieth century in Europe. In his introductory essay, the editor stresses the volumes’ focus on the intertwining between national and Christian identities. Rather than having an adversarial relationship, churches and nations often engaged in various partnerships in the twentieth century, Wood argues. Beginning with the changed conditions which shaped their relationship, he claims that the biggest challenges for Christianity were the growing state power—in particular, totalitarianism—and secularisation, which he describes as subjective secularisation. Theses common themes connect the following essays.

The inclusion of Catholic, Protestant, and Orthodox perspectives is commendable, as it highlights not only conflicts about national identity within one confession, but also points to conflicts between various denominations and allows comparisons. Since the attempt to study all of Europe and to give an overview of the Christian engagement with national identity on the entire continent is doomed to fail, the volume wisely does not claim to do so. Rather, it wants to provide insights in nine case studies dealing with specific historical protagonists and seeks to “capture the specificities of particular historical moments while evoking broader European communalities” (p. 9). 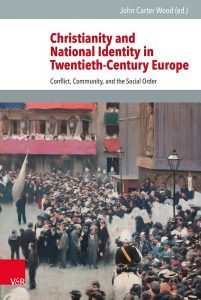 John Carter Wood is a Research follow at Leibniz Institute of European History (Mainz) who currently works on a project about Christian intellectuals and the social order in Britain in the twentieth century. Wood chose examples from various geographical areas. The selection appears somewhat unbalanced with a bias towards British case studies (Wood, Wolffe, and to some extent Ganial) and a shortage of case studies on Scandinavia, the Benelux countries, France, Italy, and the newly-built nations of the former Habsburg monarchy. In addition, however, two essays deal with European identities and Christianity, which expand the national perspectives to a great extent.

To achieve greater analytical sharpness, the volume is divided into three sections which examine (1) Christianity and community in conflicts, (2) religion, nations, and social order—this section is particularly concerned with intellectual and Christian debates about national identity in confrontation between totalitarianism and democracy—and (3) as mentioned above, faith, nations, and “Europe”.

In the first section, two essays deal with conflicts about national identity within one denomination. Jorge Luengo clarifies the significance of religion as a battlefield for the national identity between the Spanish and the Catalan nationalists at the end of the ninetieth century. Their struggle was primarily a conflict about the use of language, in services or religious education, as well as the use of national symbols for religious events. Both parties used Catholicism to legitimize their goals and claimed religious authority for their aims. The author also explains the ambivalent role of the church in this conflict.

Likewise, Mihai-D. Grigore deals with an internal confessional dispute. The author examines the ongoing conflict over power and influence between the Romanian Orthodox Church and the Russian Orthodox Church on the territory of Moldovia. Although they give the impression of unity within the Orthodox Commonwealth in their outward presentation, both church hierarchies claim ecclesiastical jurisdiction over the Moldovan Church. Both frame their argument with references to national identity. This essay also illustrates how church policy is used as an instrument to increase political influence in Moldovia.

In contrast, in his inspiring essay, John Wolffe deals with a conflict about the Christian character of national self-understanding und representation. He analyses debates about the design and messages of British cemeteries of the First World War regarding the compromise between national identity and Christianity which was difficult to accomplish. The national memorialising was filled with religious meaning. For instance, the War Graves Commission decided to choose the “cross of sacrifice”, a Christian symbol of national identity which dominated the cemeteries. For the design of the headstones, however, the commission planned to remember the sacrifice for the nation with standard rectangular headstones instead of cross-shaped stones. This caused a public controversy. As a result, relatives had the option to express their religious profession in the inscriptions. Thus, the commission was able to achieve a compromise which was sensitive to all bereaved families, irrespective of their religion.

In the last essay in this section, Gladys Ganiel examines Christian and national identities in the context of the Northern Irish “Troubles”. Based on surveys, she doubts ecumenism was a significant factor in the changing relationship between religion and national identity in Ireland and argues therefore that it cannot be a factor in the peace process. Discussing the question of secularisation, she finds that the meaning of confessional affiliation for the forming of the national identity in the Republic of Ireland rather decreases in succession of the processes of “religious individualisation, de-institutionalisation und liberalisation” (p. 88), whereas in Northern Ireland Protestantism und Catholicism remained important factors of “oppositional” national identities.

The second section examines the relationship between conceptions of social orders, religion, and nation based on examples of intellectual discussions and individual thinkers who determine the correlation between totalitarianism and democracy from different Christian points of view.

Matthew D. Hockenos’ impressive essay shows how Protestantism, faith, and national identity were intertwined in the thoughts of Lutheran pastor Martin Niemöller, a prominent member of the “Bekennende Kirche” (Confessing Church) in Nazi Germany. He traces Niemöller’s fundamental change from euphorically greeting Hitler’s rise to power—hoping Hitler would bring a renewal of a Christian nation—to his “churchly resistance” when the NS-state attacked his church. In so doing, the author shows the oppositional potential of Christianity on national identity.

A renewal of social order based on religious principles was also sought by the members of the Oldham Group, a group of British Protestant intellectuals who are analysed by the editor John Carter Wood. He examines their “religious nationalism” and its change under the experience of defeat in war, 1937–1942.

Lastly, Gregor Feindt compares the intellectual debate about “Catholic Poland” in the illegal press of the Polish opposition in late Socialism with its expression in the Solidarność movement. He argues that a convergence of agents from an exclusivist Catholic background on the one hand and those who favoured a pluralistic, more liberal nationalism which integrates Catholicism on the other hand radically reformed the idea of the Catholic nation. The author also explains the incongruence of these ideas with Solidarność‘‘s vision of the nation which remained an abstract symbol.

The third section, which is, unfortunately, quite short, discusses the relationship between Christianity and concept of Europe. Patrick Pasture presents concepts of a European fatherland or a European unity offered by Catholic thinkers from the middle of the ninetieth to the middle of the twentieth century. But it is to presume that this wasn’t a history of success, since the author concludes, most Catholics were euphoric for their nation-states.

Finally, the political scientist Lazaros Miliopoulos discusses the role of the churches in the “Europeanisation” process. He argues that the Catholic, Protestant and Orthodox Churches institutionalized and professionalized their lobbying efforts at the European level, mostly to defend their national interests and their privileged role based on national traditions in constitutions, for example in the matter of matrimony. Moreover, churches adapted their self-images to modern pluralism and conceptualised Christian perspectives on Europe. Despite the fact that they didn’t find a common understanding, all participated in the debates about it.

Although I would have wished for an evaluating conclusion by the editor, I recommend this stimulating volume, which is worth reading, as it gives the reader an insight into very different case studies and provides incentives for further research about the relationship of religion and nations in the twentieth century. It shows that religion still acts as an important resource in politics, even though the types of intertwining, mutual references and influences on national identities differed greatly between the diverse historical contexts, times, nations, and denominations.