This book on the Protestant regional church in Baden during the time of the Third Reich is the product of a research project from the early 2000s which focused on the theological milieu and mentality of the pastors and church leaders. The goal was not to write a social history of the “church struggle” in Baden, but to use the rich archival resources on Baden’s pastors to understand their experience and self-understanding, including an exploration of the ways in which political and church-political ideas were codified theologically (17). Indeed, the author takes pains to criticize the social-historical approach of Manfred Gailus and his research on Berlin Protestant parishes under Nazism, rejecting Gailus’ categories of National Socialist, regime-conforming, divided (between the Confessing Church and German Christians), and resisting parishes (22-28). In rejecting this approach and with it the social-scientific historical methods of Hans-Ulrich Wehler and others, Kunze draws on traditional church-historical approaches which view the church as a separate and unique realm within society, which focus on the clergy and their theology, and which revolve around the institutional stance of the regional churches as “intact” or “destroyed” (the latter describing church governments in which the pro-Nazi German Christians had taken control in 1933) (28-33). 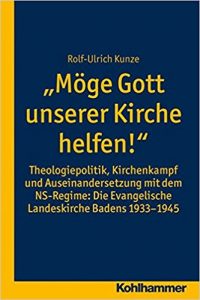 “Möge Gott unserer Kirche helfen!” is not so much a survey of the history of the United Evangelical Protestant Regional Church of Baden (Vereinigte Evangelisch-protestantische Landeskirche Badens) during the Nazi period, but a collection of research results on selected aspects of that history. After the historiographical and methodological introduction described above, Kunze provides a short overview of the church and theological history of Baden, outlining the regional church’s development from its establishment in 1821 to the Weimar era; describing the events from the critical period of 1932-1933, including the incorporation of the Baden Protestant Church into the German Reich Church and then its subsequent withdrawal; raising the question of whether Baden should be considered a “destroyed” (the traditional view) or “intact” church; and noting the increasing conflict with Nazi authorities during and after the establishment of a finance department in 1938—a strategy used by Nazi authorities in Baden and elsewhere to stifle non-conformists within the Protestant churches.

The two main sections—each about 100 pages long—assess Protestantism in Baden through the lens of church publications and individual clergy. The first of these examines the relationship between theology and politics in two publications: the Kirchlich-Positive Blätter, which Kunze sees as representative of a “confessing milieu,” and Der Deutsche Christ (formerly Kirche und Volk), which—as the name suggests—was very much the organ of the German Christian Movement in Baden. Kunze tracks both these publications from 1933 to 1935, showing how each grew more radical in its views over this three-year period, as church-political lines hardened. It is unfortunate that this analysis does not continue through the rest of the 1930s and into the war years.

The Kirchlich-Positive Blätter was the organ of the Ecclesiastical-Positive Association (Kirchlich-Positive Vereinigung, hereafter KPV), which was founded in the nineteenth century to combat theological liberalism. The KPV was committed to the Old and New Testament as the foundation for faith and Christian life, to the primacy of the Reformation confessions of faith and catechisms, and to faithful action in the power of the Holy Spirit within the church of Jesus Christ (89). For that reason, although a Confessing Church was formed in Baden, because Regional Bishop Julius Kühlewein and a majority of Baden clergy were members of the KPV and naturally supported much of the Confessing Church platform (apart from its rejection of regional church authority), the Kirchlich-Positive Blätter became the organ not simply of the KPV but also (more broadly) of what came to be known as the Confessing Community (Bekenntnisgemeinschaft), which represented over forty percent of Baden Protestant clergy (377). On the one hand, the Kirchlich-Positive Blätter promoted a conservative Protestant theology and piety. Bible reading was encouraged (125), Jesus Christ was confessed as Lord, according to the Scripture and Reformation confessions, and Roman Catholicism reproached. More importantly, the Germanization and politicization of Christianity and the deification of the state were rejected out of hand (159-160). Thus, the German Christian attempt to nazify the churches was sharply opposed in the Kirchlich-Positive Blätter. On the other hand, articles in the Kirchlich-Positive Blätter attest to the fact that, in drawing a strict divide between the realms of church and state, the KPV (and thus many in the Confessing Community) recognized the family, Volk, state—and reality of blood and race—as God-given orders of creation that were to be recognized and adhered to (159). As they put it in January of 1934, “We have always stood for the cohesion of Germanism and Christianity. Our national and patriotic attitude has always been incontestable. We are now also professing the Third Reich and its Führer” (160). Christianity, they believed, should be the foundation for Hitler’s rule (163). Overall, Kunze sees in the Kirchlich-Positive Blätter a combination of support for the Nazi regime and “theological distancing” from various German Christian beliefs the KPV deemed heretical. Still, KPV publicists realized that criticisms of the German Christians also implied criticisms of aspects of Nazism. Over time, their disappointment with the direction of the Nazi regime and its repression of the churches grew (169-170).

Though the German Christian Movement represented only about fifteen percent of Baden Protestant clergy (377), it held disproportionate influence in the regional church government and also enjoyed the support of the Baden Nazi party and state. Der Deutsche Christ (formerly Kirche und Volk) was its main publication. Kunze argues that terms like Protestant National Socialists and National Socialist Protestants don’t quite capture the ideas in Der Deutsche Christ, and quotes an author from March 1933 who rejected both the Christianization of National Socialism and the politicization of Christianity. Rather, Christians should be salt, light, and yeast in the world. Not unlike their counterparts in the KPV, the German Christians of Baden drew on a two-kingdoms theology to argue that the gospel did not govern public life, but that Christians should engage actively in the politics of their fatherland (177-178). Nonetheless, when German Christians argued that the Nazi political principle of “common interest before individual interest” was akin to the Christian teaching “love your neighbor as yourself,” or when they used the language of “reconciliation” or “salvation” to describe Hitler’s seizure of power, this was a kind of theological codification of Nazi ideas (178-179, 185-186). In Der Deutsche Christ, German Christians also dwelt on the notion of sacrifice (not least in the National Day of Mourning) and emphasized race as a lens through which to understand Christ (196, 201). Overall, Kunze argues the Baden German Christians became increasingly politicized by 1934 and 1935, and that Der Deutsche Christ reflects this. Two powerful examples were articles extolling the educational role of Nazi concentration camps and underlining the importance of cultivating racial purity (213, 216-217). By the time of the 1935 Nazi Party Rally, Der Deutsche Christ embraced a full-blown Hitler personality cult, publishing a prayer based on the German greeting “Heil Hitler!” (229).

A fourth section in “Möge Gott unserer Kirche helfen!” assesses the growth of the Baden Confessing Community and German Christian Movement through sketches of various leaders: Paul Rößger, Helmut Thielicke (misspelled as Thielecke throughout), Julius Bender, and Hansmicheal Bauer. Rößger (also spelled in various ways) gets the most attention, as a member of both the Confessing Church and the Nazi Party. On the German Christian side, only Fritz Kölli, a member of the most radical wing of German Christians, is examined by Kunze. Unfortunately, there is no analysis of Bishop Julius Kühlewein, who attempted to steer the Baden Protestant Church through the divisions of the church struggle, supporting the Nazi regime but resisting its persecution of Confessing clergy.

Next, Kunze examines the St. George Parish in the Black Forest. In a quick nine pages, he describes the conflict between the local Confessing Community and the Nazi church finance department, which the Baden church government—sympathetic towards the Confessing position—tried to ameliorate (343-351). This is followed by two short comparisons between church politics in Baden and those in Württemberg and the Pfalz.

Finally, the book’s concluding section provides Kunze with the opportunity to sum up his work and suggest further lines of research. His main argument—though he gives it only three pages of text—is that the Baden Protestant Church should be considered as a fourth “intact” church, along with Württemberg, Bavaria, and Hanover, because of the high percentage of Ecclesiastical-Positive Association (KPV) members (who were mostly sympathetic to the Confessing Community), the low percentage of German Christians, the continuity of Bishop Julius Kühlewein’s leadership (despite the takeover of the regional church government by German Christians, who also supported Kühlewein, in 1933), and Kühlewein’s decision to remove the Baden Protestant Church from the Reich Church in late 1934 (378).

Kunze devotes more attention to the notion of resistance. Though he agrees with most scholars that opposition to the Nazi church finance department did not mean resistance against Hitler’s state, leadership, or war, he does regard it as a conflict that was understood by the Nazi regime as a form of resistance, which was in turn answered with repression (382). And while the author discusses the historiography of the idea of a “Protestant resistance” based on the conceptual conflict between various Confessing Church statements and Nazi ideology and policy, he is clear that there was no “Protestant resistance” in terms of political opposition (380-388). For scholars familiar with the concept like non-conformity, opposition, and resistance and the historiographical broadening of resistance to include everything from symbolic actions to assassination attempts, this will be familiar ground.

Overall, “Möge Gott unserer Kirche helfen!” offers some insight into the lesser-known church politics of Baden during the Nazi era. There are certainly quite a few deficiencies, however, such as typographical errors, superfluous quotation, the absence of summary paragraphs at the end of sections and chapters, and the lack of an index, all of which make this book more difficult to use than it should be. In the end, however, Kunze adds to the wide array of local and regional church histories of the Third Reich, which invariably demonstrate the complexity of what is now less and less commonly called the “church struggle.”