Michael Hesemann, an independent scholar who has published several works on Pius, on Hitler’s view of religion, and on the Armenian genocide, offers a new contribution to the ongoing “Pius Wars,” the continuing scholarly debate about the degree to which Pope Pius XII opposed national socialist Antisemitism and how much he did to assist persecuted Jews. The spectrum of opinion in this debate reaches from hagiographic apologists such as Michael Feldkamp to vehement critics such as Susan Zuccotti, not to mention Ralf Hochhuth’s early attack on Pius in “The Deputy.” Hesemann makes a case for Pius’s sincere concern for Jewish suffering and his active, pragmatic support for rescue measures. He offers little new insight but amasses a large volume of evidence in the pope’s favor. This work could be a valuable contribution to the discussion, were it not for occasional disparaging comments against those with opposing viewpoints and a failure not only to make his case but engage and disprove the opposing case. 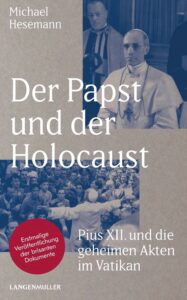 The most important contribution of Hesemann’s work is its exhaustive collection of all evidence and arguments that portray the pope’s record in a positive light. A frequently cited problem was the vague and diplomatic language used in the pope’s statements and writings; Hesemann points to contemporary sources that clearly understood the pope’s intent. Referring to Pius’ first encyclical, Summi Pontificatus, which includes a reminder about human fraternity and about the right of the victims of war and racism to human compassion, Hesemann points to the New York Times, which reported that the pope “condemned dictators, those who break international agreements, and racism.” Furthermore, the Times reported that while such a condemnation had been expected, “only few observers had expected the condemnation to be so clear and unequivocal” (104). Hesemann’s evidence suggests that Pius was not only not silent but that readers understood his guarded speech as he intended.

Beyond the question of papal ambiguity and silence, Hesemann devotes much of the work to proving that the pope was active and vocal about the holocaust. Addressing the pope’s supposed inactivity during the holocaust, Hesemann lists many instances in which the pope quietly directed that financial resources, albeit limited, be provided to help those persecuted by the National Socialists. At the same time, Hesemann shows that this aid extended beyond Catholics whom the national socialist regime considered Jewish. The examples he provides show that his assistance was reactive rather than systematic. In light of the immense need, the Vatican necessarily limited its expenditures in aid to those persecuted. Hesemann also argues that reliable information about persecutions, especially about mass murder, was challenging to obtain. According to him, Pius learned of the true extent of the genocide only after the war. (212) On the same page, however, Hesemann argues that the pope received eyewitness accounts proving the systematic nature of the murders in the East “already a few weeks before the Wannsee Conference.” (212). Thus, in January 1942, the pope knew the National Socialists were murdering according to a concrete plan. How then, as Hesemann describes a few pages later, in September 1942, could Monsignor Montini (later Pope Paul VI) have honestly told American envoy Myron Taylor that the Holy See did not possess information “confirming this grave information?” (216). To argue that the pope knew about violence, terror, and massacres, but not about the extent of the genocide seems farfetched.

Hesemann devotes an entire chapter to “the ‘wise silence’ of the pope.” (220). Pius’ silence was the result of bitter experience, claims Hesemann. Pius himself claimed that any public statements condemning Antisemitism and the holocaust were counterproductive. To each one, the national socialist regime responded with increased persecution. (208) The most robust case for reticence was the Dutch experience under occupation. Beginning in 1941, the Dutch had publicly protested against German antisemitic measures. Each time, the Germans had responded with enormous levies and additional arrests. When deportations began in 1942, the Catholic Archbishop of Utrecht ordered his protest read in all churches. (222) Within days, all Dutch Catholics whom the occupation forces considered Jewish were deported, among them Carmelite religious Edith Stein. According to the pope’s housekeeper, upon hearing the news, the pope immediately burned the draft of the public protest he had intended to make in support of the Bishop of Utrecht. German responses to Radio Vaticane’s regular reports about atrocities against Catholics led to arrests of priests, executions, and more. (231) In response to the pope’s Christmas broadcast of 1942, in which he condemned the suffering of innocents, including those persecuted based on race, the German Foreign Office threatened the pope with reprisals in Germany, should such “interference” occur again. (241). Hesemann makes a strong case that a broad, explicit public condemnation of the genocide would have wrought much suffering. However, one must ask if safeguarding the moral integrity of the Catholic Church’s leader might not have been worth the price in the scope of the crimes committed, preserving the moral integrity of the leader of the Catholic Church might not have been worth the price?

The book’s argument falters when Hesemann presents an image of Pope Pius XII as a friend of Jews, perhaps “the church leader best-disposed to Jews during his lifetime.” (61). For example, the author points to a Jewish childhood friend with whom Pius was close and whose emigration to Palestine he facilitated in 1938. More generally, Hesemann’s case for Pius’ pro-Jewish attitudes and activities during his time as nuncio in Germany relies on the testimony of Pinchas Lapide and Nahum Sokolow. Problematic are claims that Pius XII condemned the Reich pogrom of 1938 because he “must have approved and possibly even dictated himself” the Osservatore Romano’s critical response to this violent persecution. To claim that there was “no leading Catholic clergyman other than Eugenio Pacelli who opposed Hitler and National Socialism as early and as uncompromisingly” is an audacious claim. (92) Sometimes, even among the best historians, the desire for a particular “past” colors one’s work. There is no doubt that Hesemann gathered much evidence to support his case. In the cases mentioned above, the evidence presented by Hesemann broadly supports his argument. Still, a more solid foundation of evidence is needed to support some of the claims made convincingly.

The publisher’s jacket cover promises “the first publication in German of these explosive [brisant] documents.” Anyone expecting full-length explosive and previously unpublished documents will, however, be disappointed. In only two cases does Hesemann claim to offer documentary evidence he newly discovered. For example, he found a message of January 9, 1939, in which Pius, still Cardinal Secretary of State Pacelli, appealed to all leading archbishops to create structures to welcome Catholic refugees whom the Third Reich considered Jews. Pius XII claimed that about 200,000 individuals the regime considered Jewish fell into this category. Hesemann points out that this number exceeded the number of Catholics persecuted as Jews, which meant that Pius sought to create opportunities for practicing Jews. (79-80, 148)

Hesemann’s summary of post-war Jewish expressions of gratitude is exhaustive but not novel. Several significant document editions appear in the citations. However, his archival research is limited to records in the Vatican Secret Archives, specifically those of the nunciatures in Munich and Berlin and the apostolic delegation in Turkey. The documents Hesemann found in the Vatican Secret Archives generally are not new. Of the relevant scholarly literature used by Hesemann, some appeared recently, but a good number of the works are outdated. Even fifty years ago, Father Ludwig Volk, SJ, who had seen the Secret Archives, warned that this collection contained no smoking guns.

In part because Hesemann relies on questionable scholarship, his work lacks judiciousness. For example, he describes Hochhuth’s play as the result of a KGB plot (18) without mentioning that this claim stems from a largely unverifiable work by former Romanian secret police officer Ion Pacepa. Hochhuth did not need the KGB’s help writing “The Deputy.” Even were this assertion correct, it is not surprising that the Soviet bloc sought to embarrass the Vatican, nor does such a connection change the content or impact of the play. Hesemann dismisses rather than engages the work of Michael Phayer, Susan Zuccotti, and others. Accusing David Kertzer of inventing the claim that Pius XI did not want to publish an encyclical that would offend Hitler is a scholarly accusation that deserved a much more detailed explanation. In general, Hesemann undermines his work by this combination of disparaging scholars with contradictory opinions and failing to disprove their claims.

Beyond the corpus, the book includes a preface by Father Peter Gumpel, Ph.D., SJ, deeply involved in the canonization process of Pius XII. In the acknowledgments, Hesemann thanks Pope Benedict XVI for his encouragement and leading German curial officials for their help as he wrote the manuscript. While the preface and acknowledgments do not predetermine the book’s conclusions, they suggest that Hesemann would have felt the need to be all the more critical of his sources and their arguments to avoid the appearance of prejudice.

Reading the work without context, one seems to see a convincing case for an actively engaged pope, one who opposed National Socialism at every turn but whom experience had taught to be diplomatic and to act “under the radar,” without openly condemning his powerful enemies. Such a reality would have been an almost ideal papacy. This wishful thinking is not exclusive to Hesemann. It seems that, at least for now, the “Pius Wars” will continue to obstruct objective scholarship.