Questions around the legacy of German colonialism and how its racist ideologies and genocidal campaigns against the Maji-Maji in German East Africa (1905-1908) and the Herero in German Southwest Africa (1904-1908) influenced Nazi exterminationalist policies in World War II and the Holocaust have been debated in scholarship and public discourse for a good two decades. In the same decades, public awareness of the persistence of reflexive, uncaring repetitions of colonial patterns in postcolonial nations has steadily grown, not at least because of recent protests against vestiges of colonialism that led, to name just two examples, to the repatriation of stolen cultural artifacts from European museums and the removal of public monuments in countries like Great Britain, Germany, the Netherlands, and the United States. The presumption that Christian missionary activities were deeply embedded in the colonial enterprise, working in tandem with secular colonialist rulers, sounds like a truism today. And yet, Jeremy Best’s new book on German missionary culture questions a facile alignment of colonial economic exploitation (by secular nations states) with missionary ambitions to win souls for Christ. 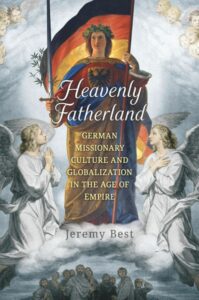 Best, a historian at Iowa State University, pleads for a careful analysis of historical documentation related to German Protestant missionary activities in the nineteenth century within the context of German religious and political culture. His study of “the vast corpus of texts produced by the German missionary movement…between 1860 and the First World War” (7) arrives at the insight that relations between Protestant missionaries and German secular colonial elites were tense and fractured. They did not see eye-to-eye with regards to the purpose of establishing colonies in Africa. German Protestant missionaries aimed for a global Christian community in which the indigenous population (the colonized subject) was given some agency. They recognized the value of indigenous subjectivity that, in their imagination, would blossom economically on local levels, thus protecting them from becoming objects of brutal exploitation in the interest of European nation states, including the late colonial aspirations of the Wilhelmine Empire. What indigenous Africans were missing, according to German Protestant missionaries, was education, and that meant, of course, Christian education.

Following in the footsteps of text-centered Lutheran traditions—even if not all German missionaries were Lutherans—it may not surprise that education, learning, and reading were centerpieces for German missionary activities. They included bringing the word of God to “heathens,” translating the Bible into indigenous languages, publishing multiple mission journals, and creating the new academic discipline of Missionswissenschaft. Hence, with a tongue-in-cheek allusion to the Gospel of John, Heavenly Fatherland opens with the following lines: “In the beginning were words. Words said, words written, words read by German Protestants seeking knowledge of God, knowledge of the world, and knowledge of other people” (5). From the very first page, the reader gets prepared for an exploration of a German Sonderweg of missionary activities, a path distinct from mission aims of other colonial empires like Britain or Spain, but also distinct from German Catholic activities in German Southwest and East Africa.

The author presents his arguments in six chapters. Though he is mostly focusing on German East Africa (surrounded by British, Belgian, and Portuguese colonial territories) and on the work of the Berlin Mission, his perspective is always directed at the larger political picture. The book brings together, Best states, “religious history [and] the history of German colonialism” (18). Seamlessly woven into his overall thesis are materials from other mission societies and Hilfsvereine at home as well as larger political tensions and competitions between various actors (between European colonialists; Protestant missionaries and German colonial elites; German national politics and Protestant dreams of a global “heavenly fatherland”; German Protestants and their anti-Catholic crusade during the Kulturkampf).

Chapter 1 focuses on the development of German Protestant mission ideals that pursued not national interests but the preaching of the Gospel. Important figures like Gustav Warneck and Carl Mirbt advocated for the Gospel of Mark’s Great Commission: mission work should not create “Germans” among colonized people, but “Christians” among “heathens.” These men followed an international vision with “economically self-sufficient…colonized communities” (45) in Africa as well as aspirations for a worldwide Christian mission network. At the turn of the century and before the outbreak of World War I, a younger generation of mission leaders, like Karl Axenfeld and Julius Richter, followed, however, a new direction, pushing more forcefully to align Christian mission work with the German nation.

Chapter 2 pays attention to the importance of language and education that Protestant Germans ascribed to regarding their missionary ideals. Rather than replacing native languages and culture with those of the colonizer, Gustav Warneck understood that “Christianity [as] a foreign religion can only become indigenous…if they grasp it in their mother tongue” (68). To some extent, Warneck and others wanted a less-intrusive cultural exchange, respecting indigenous languages while organizing the newly found African-Christian communities as Volkskirchen—this very German idea that a particular church community is constituted by a particular Volk (a people/ethnos/ nationality/race). What Warneck and others did not grasp—according to Best—is that their professed global outlook nevertheless implanted particular national concepts in Africa, and thus inadvertently participated in the national colonial enterprise they resisted.

Chapter 3 examines tensions between missionary aspirations and secular state interests regarding the indigenous work force. While the state wanted cheap labor (and at best allowed for something like trade schools), the theology of missionaries aimed for a broader education to create communities for African Christians, in opposition to demands for producing “a proletariat toiling for European colonialists” (111). Chapter 4 provides a gripping analysis of the clash between three parties: secular, national imperialists focused on exploiting indigenous peoples and lands, Protestant missionaries wanting to create local indigenous Volkskirchen as Christian agrarian communities, and Catholic missionaries somewhere in between (according to Protestant polemics, the Catholic Church “satisf[ied] the needs of trading companies [and] plantation owners”; 120). The chapter briefly reviews the history of anti-Catholic sentiments in Germany and how this conflict spilled over into the African continent, with the result of Protestants and Catholics jostling over land. To that end, missions, like the Berlin Mission, acquired land as protection zones from economic exploitation. This process was, of course, just another colonial “paternalistic plan” (127) of land appropriation—albeit in the form of benign paternalism with the goal of protecting Christian-African communities.

Chapters 5 and 6 return “home” to the European continent. While Chapter 5 shows the tremendous effort of Protestant missionaries to build up support networks in German localities through presentations, exhibits, testimonies by Christianized Africans, and publications, Chapter 6 introduces the reader to the Protestant efforts of creating international Christian mission networks. It focuses on the 1910 World Missionary Conference in Edinburgh, where the German participants hoped, for good reasons, to take a leading role in future global mission outreach. Those dreams were shattered with World War I. By 1918, Germany did not only lose its colonies, it also lost its moral standing in international settings, and that included the churches. The rise of Hitler and eventually World War II and the Holocaust confirmed to the world that Germans could not be trusted.

Compared to other colonial empires (like British, Spanish, Dutch, Portuguese), German colonial rule was short-lived. It lasted for about half a century. Whatever long-term dreams national-secular elites and Protestant missionaries followed when they expanded into African territories, they all came to an abrupt end after World War I. The question remains: Were German Protestant missionaries and their theologies entangled in a racist and colonial enterprise in Africa that may have laid the foundation for the rise of racist antisemitism and the eventual genocidal campaigns in Europe after 1939? Jeremy Best’s work provides evidence that this is not the case. Generally, he sees nineteenth century German colonial history having more “in common with its contemporaneous Western empires than it does with the Third Reich” (11). Specifically, he makes us aware of significant differences between the aims of German Protestant missionaries and national interests of secular colonialists. The former resisted colonialist economic exploitation.

Nowhere does Best claim that German missionaries were free of colonialist and racist thoughts and practices; only that they “imagined racial differences differently” (10). He concludes that they “rejected the most extreme elements of racism and imperialism” (217). Best has no interest in glorifying or morally elevating German missionaries. He is fully aware that he is approaching his study through the eyes of the documentation left behind by the missionaries themselves, not through the eyes of the indigenous African population, thus privileging a European perspective. Hence, a study like this, he writes, “cannot pretend to be the whole truth of German colonialism” (218).

Framed within an awareness of the limitations of his study on colonialism and missionary activities, this is an excellent book—motivating, perhaps, someone else to write a response based on historical documentation by the indigenous population of German East and Southwest Africa, however scarce. Even when assessing some of Best’s interpretations differently, Heavenly Fatherland is an important read.

If there is any flaw (on a more formal level), then we can point to a certain kind of repetitiveness related to the author’s main thesis and sub-theses. Too often do we find central insights repeated in slightly different wordings, holding back the flow of the text and the reader’s attention when we were already prepared to move onward.