Denomination and welfare under National Socialism – a topic that at first glance is not directly related to the National Socialist mass crimes. However, right at the beginning of their introduction, the editors help the reader understand the importance of welfare in the Third Reich. During the nineteenth century, there was a massive expansion of charitable institutions in Germany. With the seizure of power by the National Socialists in January 1933, a new understanding of the tasks of a health policy would develop based on the party ideology, which was fundamentally opposed to the previous ideas. Accordingly, the institutions owned by religious associations were faced with the crucial question of how to deal with the reorientation of health policy from 1933 onwards. 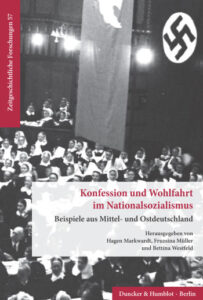 The focus on the regions of Central and Eastern Germany is a response to the current dearth of research on that region. Because denominational institutions were relatively autonomous at that time, such a regional delimitation makes perfect sense. Due to the denominational character of the region, then, most of the contributions deal with institutions and actors from the Protestant (evangelisch) spectrum, which is understandable. This will allow comparisons to be drawn between the various actors and institutions in different regions of Germany at a later point in time. It is regrettable that the editors did not succeed in soliciting contributions on the Thuringian region. They have focused on Silesia, however, which has also been rarely examined by research so far. A positive point to be emphasized here is the approach of the editors, acknowledging that the “relationship between the Christian-denominational institutions and the Nazi rule [are] not to [be understood] from the outset as dichotomous” (p. 11). Even if this approach should be a matter of course from this reviewer’s point of view, recent works show again and again that an ideological opposition between Christians and National Socialists is frequently assumed from the outset. Therefore, as self-evident as it may be, the editors’ basic attitude as it is formulated and implemented in the book is to be appreciated.

In the first, very well-structured article, Norbert Friedrich examines the developments within the Kaiserwerther Verband (KWV) in the ‘Third Reich.’ The KWV was the umbrella organization of the German deaconess mother houses. The head of the KVW is at the center of Friedrich’s examination. The KWV, to which around 30,000 deaconesses were subordinate in 1936, quickly introduced self-enforced conformity with National Socialist policies in 1933 without government coercion. In the same year, the national-conservative and anti-democratic executive committee accordingly abolished the democratic structures remaining from the times of the Weimar Republic, which were not popular anyway. By the end of March 1933, antisemitic propaganda from the National Socialists was also being echoed by the KWV. During the same year, the leadership of the association also clearly positioned itself in favor of German Christian Movement, which illustrates anti-democratic and antisemitic thinking. Due to the increasingly strong position of the Thuringian German Christians, the association distanced itself from the German-Christian spectrum from 1934 onwards, but this should not obscure its support for the Hitler state. Even if the state increasingly tried to restrict the deaconry in its actions, the KVW remained an important point of contact over the years.

In his contribution, Uwe Kaminsky analyzes the Expert Committee for Eugenics of the Inner Mission (“Fachausschuss für Eugenik der Inneren Mission”), which was founded in 1931. He concentrates on the Saxon representatives of the committee – those tasked by the regional church to discuss eugenics and euthanasia. That discourse was not without consequences, as Kaminsky rightly states, in reference to the approximately 25,000 Saxon victims of eugenics policies during the period from 1933 onwards. In the essay, Kaminsky presents biographical analyses of the individual Saxon representatives and concludes that many who had previously advocated voluntary sterilization went on to support the compulsory sterilization enforced by the National Socialists in 1933. Nevertheless, even though they agreed to the plans of the new authorities for mass sterilization, the representatives rejected euthanasia.

The Regional Association of Saxony of the Inner Mission is the focus of Bettina Westfeld’s contribution. Particularly shocking is the fact that in 1931 three of five clergymen in this regional association were members of the NSDAP. It is therefore not surprising that, immediately after Hitler came to power, the Inner Mission made declarations of loyalty to the new regime throughout Germany. Even before 1933, there was an endorsement of sterilization measures in the Regional Association of Saxony, citing as the reason for such measures the cost of care for mentally and physically handicapped people. In the years that followed, the Regional Association found itself in a field of tension within the divided Saxon regional church, which certainly did not make it easier for them to act. Westfeld’s contribution is shocking in some places, as she repeatedly refers to the number of victims and the individual fates of victims of the Nazi terror. She also addresses the attempt by individual deaconesses to hide patients to prevent them from being transported to killing centers like Pirna-Sonnenstein. However, these were individual actions and not measures by the regional church and the Inner Mission, which were hardly able to act anyway. The positive attitude towards sterilization measures also weakened the arguments of the Inner Mission to act against further measures aimed at “racial hygiene.” In the end, there was the terrifying number of 432 deaths from the homes of the Inner Mission, as well as a still unknown number of deaths of people over whom the Inner Mission held guardianship.

Christoph Hanzig examines another important aspect of this history, namely, that most of the facilities for the care of handicapped people in Saxony were not church-owned, but state-sponsored. Accordingly, Hanzig offers biographical information about the Protestant pastors in those state care facilities, in which pastors functioned as state officials. None of the pastors portrayed in detail belonged to a democratic party before 1933, but some were members of the NSDAP. So, it is hardly surprising that from 1933 almost all those pastors were actively involved in the Nazi state, supporting Nazi health policy.

The six contributions by Jan Brademann, Annett Büttner, Fruzsina Müller, Helmut Bräutigam, Manja Krausche and Elena Marie Elisabeth Kiesel all deal with empirical studies on one or more deaconess houses in Saxony or Saxony-Anhalt. For example, Kiesel examines the internal correspondence between headmasters and the sisterhood, using the case of the houses in Halberstadt, Magdeburg, and Halle/S and focusing on the “Schwesternbriefe” as a primary source. These were private in nature, which is why they offer an exclusive insight into the actual correspondence between the various staffing levels. As can be seen in the other contributions, the superiors of the houses examined by Kiesel also endorsed the appointment of Hitler as Reich Chancellor and called on the sisterhood to participate in “building up the Volksgemeinschaft.” Despite the increasing pressure from the National Socialist People’s Welfare (NSV), loyalty to the state was never in question. In 1940, an antisemitic appeal was issued to fight the Jews on the home front as well. The persecution of the Jews and the practice of euthanasia were almost never mentioned. Only in 1943 does a change in the content of the letters become visible, in which the previously loyal position to the regime was given up in favor of a stronger orientation toward peace.

Maik Schmerbauch provides a study on nursing and welfare for the poor in Breslau, while Jürgen Nitsche and Hagen Markwardt examine Jewish care facilities. Nitsche’s contribution illustrates the pressure that Jewish communities faced beginning in 1933. Increasingly deprived of infrastructure and government grants, they had to try on their own to organize care for older and handicapped community members. Accordingly, the Jewish community in Chemnitz, which serves as an empirical example, was forced to build a rest home.

Even though the regional focus is on Saxony and Saxony-Anhalt, the knowledge gained through the anthology is expansive. The respective contributions impress with their empirical depth, so that the reader gets an insight into the connection between welfare and church denomination during the time of National Socialism, from the level of regional associations down to the very local level. However, the anthology deserves a summarizing conclusion. The individual contributions are highly informative and contain many new findings. A summary by the editors would have made it possible to systematically analyze the empirical contributions again, articulate special features and point out new research perspectives. Unfortunately, the editors missed this opportunity to broaden the perspective. Nevertheless, the anthology generates a multitude of new findings regarding the role of welfare institutions under religious sponsorship during the period of the ‘Third Reich.’