As one might see immediately from the title of the above-named work, the Reverend Butler-Gallie is quite clever and creative in wordplay. This is one of the most engaging books written as inspiration for those who have come to believe that Christianity was more than a willing tool of fascist regimes and genocidal projects in the twentieth century. In fact, in the brief introduction to the book, the author notes that Christianity and Fascism have been intertwined and that the complex relationship of Christian institutions with Fascist dictatorships has spawned an enormous number of works. This work is not attempting to delve deeply into the interplay of Christian Church leadership with the monumental devastation produced by fascist projects. Instead, this work serves as an attempt to underscore the rare and therefore more extraordinary acts of Christian men and women who decided that their commitment to the teachings of Christ and their understanding of Christian teaching meant that they had no other choice but to resist destructive fascist actions and the harmful ideology behind them. 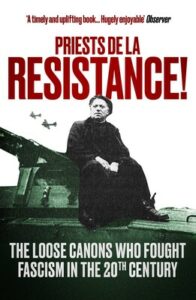 The book is divided into five sections, beginning in occupied France, with stories of “resistance par excellence” focusing on the lives of Canon Felix Kir (of blanc de cassis aka “Kir” fame) and Abbe Pierre (born Henri Marie Joseph Groues). Both of these individuals engaged in acts of sabotage, rescue work (especially of persecuted Jews), and generally served as thorns in the sides of the Nazis and their French collaborators.

The next section focuses on places where resistance to fascism meant going against one’s own people and one’s own government: Germany and Italy. Here readers encounter a Catholic bishop, Clemens August Graf von Galen; a Protestant minister, Dietrich Bonhoeffer; and finally a Catholic priest, Don Pietro Pappagallo, who engaged in forging new identities for the persecuted in and around Rome. This inspiring story of Don Pietro Pappagallo then leads into the longest section of the book; an examination of Christians resisting while living under occupying powers. This section brings in Czechs, Hungarians, Greeks, Poles, Dutch, and Danes. Some survived their acts of resistance, while others, such as Sister Sara Salkahazi, a former chain-smoking journalist turned nun, did not.

Finally, the two remaining sections of the book focus on two individuals who left the relative safety of Ireland and Scotland, Father Hugh O’Flaherty of Scarlet Pimpernel fame and the much lesser-known but no less inspiring Jane Haining, who traveled to Hungary to help orphaned girls and who died along with her charges in a gas chamber in Auschwitz. The final segment focuses on Pastor Fred Shuttlesworth, who fought for integration in the deep South of the United States, and on a young seminarian from New England, Jonathan Daniels, who took a bullet intended for a young black girl attempting to attend an all-white school. This final segment on civil rights in the United States seems a bit out of sync with the rest of the work. That said, one can see the overlap in racist ideology and understand why the author decided to include these accounts in a work on resistance.

As one can see from this brief overview, the book aims to cover a great deal of ground, using individual life stories as lessons for the reader. Are saints mad? Are they fools? Are martyrs always brave in the face of life-threatening circumstances? And so on. These vignettes are also meant to inspire the reader with a sense that, even in the darkest of times, there are always good, brave people who decide that they would rather give their lives in the name of their principles and beliefs than conform to whatever the majority in society is doing at the time.

The Reverend Fergus Butler-Gallie’s writing style makes for a rollicking read, and, despite the fact that I disagree with his interpretation of my scholarship on Bishop von Galen, I found the work to be one that I did not want to put down. There is much energy, plenty of puns, and some non-scholarly vocabulary in the work (such as saying Father Kir’s actions indicated his “sheer ballsiness,” p.14) yet this type of non-scholarly language is what makes the book so engaging. It breaks through the clutter of stale academic prose, it captures the reader’s imagination with wonderful turns of phrasing, and it radiates some of the energy that this cast of characters must have needed to draw upon in order to maintain their faith and values in the face of death.

I am certain that scholars who have spent years researching each one of these individuals might find errors or misinterpretations of the subjects’ lives, yet, in spite of that fact, many readers might then be led to follow up on the suggested readings at the very end of the book to investigate each person whose bravery and dedication to God reverberates throughout the work. If one takes the book on its face – that is, that it is meant to serve as a source of inspiration and hope for readers of all faiths much like reading a Lives of the Saints collection, I would recommend reading the book. In a time when a person’s decisions could have life-saving or life-threatening consequences, the individuals featured by Rev. Butler-Gallie reveal the power that deep faith in God can serve as a continued source of strength for us all.

← Review of Carsten Linden and Craig Nessan, Paul Leo. Lutherischer Pastor mit jüdischen Wurzeln (1893–1958)
Review of Robert Braun, Protectors of Pluralism: Religious Minorities and the Rescue of Jews in the Low Countries during the Holocaust →