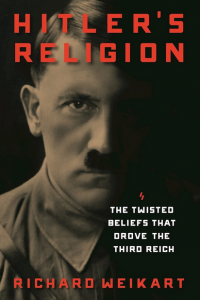 According to Weikart, when Hitler came to power in 1933, he had long left behind the Catholicism of his baptism and had embraced pantheism which views God as nature and the cosmos. Weikart concedes that Hitler’s rhetoric also, at times, revealed a panentheistic worldview which, while recognizing nature as divine and a part of God, also acknowledges God as transcending nature. Still, Weikart insists that Hitler’s God was not “Jesus Christ or the God of the Christian Bible” (xii). Rather, nature was God, and God was nature, whose harsh laws inherently governed the universe. The law of nature became Hitler’s “infallible guide to morality. Whatever conformed to the laws of nature” Hitler viewed as morally good, and “whatever contravened nature and it sways was evil” (xiii).

Weikart divides his book into ten chapters, each focusing on a specific question concerning Hitler and religion. The result is a work that is immensely readable and accessible to both informed and uninformed readers. Weikart begins by asking if Hitler was a religious hypocrite. He answers affirmatively. Weikart places little credence in statements used by fellow scholars to substantiate a Christian profession of faith by Hitler. For example, he dismisses as opportune Hitler’s 12 April 1922, declaration, “My Christian feeling directs me to my Lord and Savior as a fighter…. As a Christian, I do not have the duty to allow the wool to be pulled over my eyes, but I have the duty to be a fighter for the truth and for what is right…. As a Christian, I also have a duty toward my own people.” Weikart is “skeptical about anything Hitler professed” religiously and argues that he would lie “whenever he thought it would benefit him” (2). Labeling Hitler “a savvy politician,” Weikart finds that Hitler learned from the mistakes of other politicians, such as Georg von Schönerer, whose Pan-German Party lost many adherents when it embarked upon an anti-Catholic crusade (12). Hitler felt Germans should be left to pursue the religion of their choice as long as it did not create divisions among them.

So who influenced Hitler’s religious worldview? To answer this, Weikart examines five individuals who he believes had the greatest impact on Hitler’s religious worldview: Arthur Schopenhauer, Freidrich Nietzsche, Richard Wagner, Houston Stewart Chamberlain, and Julius Freidrich Lehmann. While Schopenhauer and Nietzsche specifically professed atheism, recurrent themes dominate the writings of all five individuals: the primacy of the will, struggle in nature, and rejection or inversion of traditional Judeo-Christian morality. Wagner and Chamberlain also offered distorted depictions of Christ, which significantly departed from any biblical basis. Despite parallels between the thinking of the five individuals and that of Hitler, Weikart concludes that there are too many contradictions to determine who had the most significant impact on Hitler.

Though some aspects of their thought influenced Hitler, the atheism of Schopenhauer and Nietzsche were not convincing enough for him to adopt it. Weikart believes that Hitler’s close association of atheism with Marxism, Social Democracy, Communism, and Bolshevism led him to reject it. At the same time, Hitler was not a Christian. Here Weikart accepts the trinitarian definition of Christianity used by the World Council of Churches. He specifically rejects a broader use of the term. Nor does he accept other historians’ arguments that identify individuals as Christian based upon their baptism and religious upbringing. If anything, Weikart believes Hitler abused Christianity for political ends. He offers the example of a 1932 National Socialist publication, Hitler wie ihn keiner kennt, that exhibits a photo of Hitler exiting the Marienkirche in Bremerhaven. The angle of the picture portrays the cross on the top of the Church’s door to appear directly above Hitler’s head. In a 1935 reprint, after Hitler was securely in power, Heinrich Hoffmann, the photographer, edited the image to remove the cross. Weikart argues that Hitler no longer needed to represent himself publicly so confessionally aligned with Christianity. If anything, Hitler viewed Christianity as a religion of the sword with Jesus, its Aryan knight, as the defender of Germandom against its Jewish enemies. Hitler contrasted this view with the Christianity personified by Germany’s Christian churches, which he found fatally permeated by Judaism. Weikart finds plausible the position of historian Derek Hastings (Catholicism and the Roots of Nazism: Religious Identity and National Socialism, Oxford, 2010), which reveals Hitler’s position more supportive of Jesus and Christianity before the fall 1923 Beer Hall Putsch. Echoing historian Ian Kershaw’s judgment, after 1923 Hitler was no longer the drummer preparing the way of another, but now the rising Führer who was destined to lead Germany. Hitler needed only to use Christianity when advantageous. Otherwise, he was indifferent or even antagonistic toward it. Weikart argues that the “evidence is preponderant against Hitler embracing any form of Christianity for most of his adult life” (105).

If Hitler was not Christian, then, Weikart investigates whether or not Hitler wanted to destroy the churches. Closely following the existing historiography, Weikart concludes that Hitler did not wish to demolish the Christian churches immediately, but planned on them gradually withering away as the National Socialist state restricted their influence on youth and society. For Hitler, the annihilation of European Jews, suppression of Communism, and expansion of Germany’s borders took precedence over the swift destruction of the churches. Hitler’s interference in the Kirchenkampf often served as a “moderating influence on anti-church policies,” though, Weikart admits, that after 1940, under the influence of Himmler and Bormann, Hitler’s rhetoric became more hostile toward the churches.

Weikart believes that Hitler was not only not Christian but also did not derive his antisemitism from Christianity. Weikart portrays Hitler’s antisemitism as decidedly racial with little or no influence garnered from Christianity. The work of secular antisemites Dietrich Eckart, Alfred Rosenberg, and Theodor Fritsch nourished and inflamed Hitler’s hatred against Jews. Repeatedly, Hitler rooted the justification for his antisemitism and anti-Jewish policy in biology and nature, not in Christian anti-Judaism. Still, Weikart admits, “Both Christian anti-Semitism and anti-Christian anti-Semitism—thus, both religion and secularization—were necessary conditions for the advent of the Nazi Holocaust. The anti-Semitic message that Hitler preached, however, was far more anti-Christian than Christian” (171).

If Hitler derived his antisemitism from sources other than Christianity, could occultism or neo-paganism be linked to him? Weikart argues that Hitler did incorporate certain teachings from occultist writings but did not completely identify with either movement. Among the occultists who influenced Hitler’s thought Weikart lists: Jörg Lanz von Liefenfels (Adolf Josef Lanz), Guido von List, Hans Hörbiger, and Rudolf von Sebottendorff. Liebenfels promoted a Darwinian racial struggle, pitting Aryan purity against racial mixing. List introduced the swastika as an Aryan symbol while encouraging selective breeding for racial enhancement. Sebottendorff’s Ariosophy taught racial inequality and critiqued the precepts of Christianity while his Thule Society became a schooling locale for southern Germany’s extreme right-wing. Despite the similarities of the teachings above with Hitler’s worldview, there is much that he did not adopt from the occultists, especially their “mystical religious” ideas (184). Many of the Aryan theories were also widely disseminated in non-occultist pamphlets and writings easily available in Vienna’s cafes and newsstands during Hitler’s time there from 1908-1913. Weikart points out that the Nazi regime persecuted occultists. Hitler also did not always support the promotion of neo-paganism by Rosenberg and Himmler. Accordingly, Weikart argues that Hitler was more enamored with “copying the classical styles of ancient Greece and Rome than resurrecting ancient Germanic culture” (190).

In the end, Weikart concludes that Hitler was a pantheist whose God was nature. Harsh natural law guided Hitler’s morality. The axiom then follows, “Whatever benefits the Nordic race is moral” (248). Weikart completely rejects the views of historians such as Richard Steigmann-Gall who suggested a compatibility between National Socialist and Christian ethics. For Hitler, the Nazi proverb holds true, “The individual must and will as always perish; only the Volk must remain” (255). Therefore, according to Weikart, Hitler believed he had a right to destroy anyone who was weaker and a right to fight for Lebensraum.

In his conclusion, Weikart writes, “Indeed, it is much easier to figure out what Hitler did not believe than to figure out the actual content of his religious convictions and feelings” (276). Weikart’s comment is honest and telling. Too often, however, Weikart endeavors to pinpoint Hitler’s thinking on a particular issue but then presents another piece of evidence that is contradictory. As Weikart admits, Hitler “was a religious chameleon, a quintessential religious hypocrite” (12). Weikart is correct that Hitler was a chameleon who could not be trusted. Yet, Weikart perhaps tries too hard to convince the reader of Hitler’s pantheism. He does not seem open to considering the longstanding impact of the Austrian Catholic milieu on Hitler’s upbringing and education. Ingrained indoctrination into a faith tradition often remains in an individual’s psyche long after practice ends. Had it been published in time, Weikart might have also benefited from consulting Nathan Stoltzfus’s Hitler’s Compromises: Coercion and Consensus in Nazi Germany (Yale, 2016), which would allow him to see the various ways in which Hitler dealt with complicated confrontations between church and state. Likewise, he might have taken a closer look at my Hitler’s Priests: Catholic Clergy and National Socialism (Northern Illinois University Press, 2008), which presents how many clergy supporters of National Socialism readily intertwined their Catholic Christianity with National Socialist ideology. The God of Adolf Hitler is not very different than the God professed by Father Philipp Haeuser, a notorious “brown” priest from the Augsburg diocese. Clearly, Weikart has examined an extensive amount of published primary and secondary sources for his work. Nevertheless, the decisiveness and unyieldingness of his argument seem to call for further documentation and comparative analysis through the incorporation of archival sources, to definitively conclude that Hitler was a pantheist. However, in the end, perhaps Hitler will more than likely still only reveal a chameleonic nature, without ever allowing anyone to pinpoint his internalized religion decisively.