Jehovah’s Witnesses are members of a Protestant millenarian sect, who look forward in anticipation to the last days, which they expect will take place very shortly in a catastrophic conflict between good and evil. Founded in the United States at the end of the nineteenth century, a small number had already come to Germany before the First World War. But the turbulent, revolutionary political upheavals which took place in Germany after 1918 seemed to confirm their expectations. The Witnesses grew in number, and were reckoned by 1933 to count some 20,000 adherents, who were active as door-to-door preachers in many parts of the country. 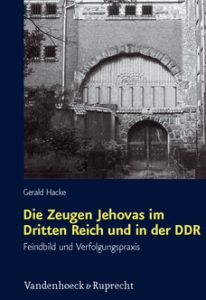 Much of the scholarly literature about the Jehovah’s Witnesses has been conditioned by the harassment and persecution which this sect endured during the period of Nazi rule after 1933. Most of the authors have displayed sympathy with the Witnesses’ sufferings and pay tribute to their enduring loyalty to their faith. Gerald Hacke, however, is principally interested in the actions of the state authorities, and the organization of the various methods of repression which took such a toll. Furthermore he has noted that the same kind of repression was carried out in the post-1945 years in what became known at the German Democratic Republic (GDR) under the aegis of the Communist rulers of that part of Germany for the next 40 years. His large-scale account is therefore mainly a comparison of the similarities as well as the differences in the treatment of this minority religious group by the two ideologically opposed dictatorships. In so doing he has delved in to the vast amount of state documentation left behind by both regimes, particularly in their police and judicial records and the files of the various government ministries who attempted to bring the Jehovah’s Witnesses to heel.

Hacke divides his account chronologically, with 200 pages dealing with the Nazi period and the same for the decades of repression in the GDR. These surveys are accompanied by an extensive list of the files consulted and a forty page bibliography. He completes his study with a close examination of the parallels and differences in the forms of repression put in place by the two regimes. In both cases he notes the stubborn refusal of the Witnesses to conform to the states’ requirement of political loyalty. But the subsequent banning of their organizations and activities stirred up a sense of victimization which in fact only strengthened the community. The increasing number of legal challenges, as well as pressure from the U.S. State Department on behalf of the Witnesses, for example in 1934, showed that such repressive policies had disadvantages, even though the wider public, including the mainline churches, showed little or no sympathy. The reintroduction of conscription in 1935 led to the arrest and imprisonment of numerous younger male members of this sect. The same feature was to follow the identical measure taken in the early 1950s in the GDR. But in neither case did the Witnesses abandon their faithful and stubborn commitment to refuse any form of military activity. The Nazi and Communist officials were therefore both forced to recognize the ineffectiveness of such punitive actions, but were adamant in regarding the Witnesses as a political and ideological danger which required drastic treatment.

Hacke avoids drawing any direct link between the repressive forces mobilized by Himmler, allegedly in order to follow Hitler’s call for ”the eradication of this venomous brood”, and those followed twenty years later in the GDR by the Ministry of Security, commonly known as the Stasi. The similarity of tactics is however clear. Both dictatorships sought to imprison the sect’s leading figures, imposing employment bans, and even removing children from their families. During the Nazi period some 10,000 Witnesses were imprisoned, including 2000 sent to concentration camps, where they were identified by wearing purple triangles on their clothes. Moreover, 240 were executed, while up to 1200 lost their lives while incarcerated. No other group of religious prisoners was exposed to the sadism of the Nazis in such a brutal fashion.

To be sure, the Gestapo offered to release these prisoners if they would sign a paper declaring their renunciation of their former views and promise not to associate with their fellow Witnesses. Hacke does not make it clear whether this project was designed to sow dissension in the Witnesses’ ranks, or to relieve the prison and concentration camp system of these unwanted and uncooperative inmates. In any case the tactic failed.

After 1945 and the collapse of the Nazi regime, the surviving Witnesses began to regroup and to resume their activities, though mainly in hiding from the successor authorities. Soon enough they were to meet vehement opposition from the newly-established Communist authorities in the eastern sector of the country, which in 1949 became the German Democratic Republic. This campaign made much of the fact that the Witnesses were founded in the United States, and were therefore seen as agents of American anti-Communist imperialism. The Stasi was characterized by the same fanatical zeal as the Gestapo, and in fact extended their intrusive surveillance to even wider sections of the population. But right up to 1989, the Communist regime justified its repression of the Witnesses with very similar accusations of disloyalty and failure to support the national goals of the Communist party.

Hacke rightly points out that both regimes, despite their different propagandistic justifications, were deliberately seeking to suppress any supposedly deviant groups by very similar methods. The Witnesses, however, were able to mount an effective resistance in part because they had arrived in Germany with the expectation that their dissident beliefs would create conditions in which they would be persecuted. Their long experience of victimization gave them an intense sense of group solidarity, and the faithful adherence to their beliefs was thus built in and maintained throughout the more than fifty years of repression.

After 1989, with the overthrow of the Stasi and its political masters, the Witnesses were no longer subjected to government-sponsored suspicion and surveillance. But as Hacke points out, the decades of defamation and discrimination had left an almost indelible pejorative reputation in the minds of the general public. The Witnesses then campaigned successfully to gain recognition as a public corporation in German law, but the wider issue of prejudice still remains, as can be seen in the active hostility by some of the more established church groups against the proselytizing undertaken by Jehovah’s Witnesses. The search for a new identity in a new Germany still continues.

← Article Note: Martina Cucchiara, “The Bonds That Shame: Reconsidering the Foreign Exchange Trials Against the Catholic Church in Nazi Germany, 1935/36”
Review of Gerhard Besier, ed., “Intimately Associated for Many Years”: George K. A. Bell’s and Willem A. Visser’t Hooft’s Common Life-Work in the Service of the Church Universal – Mirrored in Their Correspondence →