Review of Gerhard Besier, ed., “Intimately Associated for Many Years”: George K. A. Bell’s and Willem A. Visser’t Hooft’s Common Life-Work in the Service of the Church Universal – Mirrored in Their Correspondence

Bishop George Bell was the stalwart champion in the Church of England promoting ecumenical relations with the other churches of Europe and North America throughout the nearly thirty years of his episcopate from 1929-1958. He held leading positions in innumerable committees, councils and conferences, and in 1937, during the world meeting in Oxford of the Universal Christian Council for Life and Work, was a strong advocate for joining with Faith and Order, in order to found a World Council of Churches, which took place in 1938. At the same time it was agreed that this new Council (still in process of formation) should be established in Geneva, and that a young Dutch theologian W.A.Visser ‘t Hooft (Vim), who had served for several years in the Geneva scene as General Secretary of the World Student Christian Federation, should be appointed as General Secretary. Visser ‘t Hooft was far more of a General than a Secretary—I knew him personally—and brought unrivalled resourcefulness and a resolute determination to see his ideas realized, for the best part of thirty years. This was the beginning of a partnership between Bell and Visser ‘t Hooft, who early on struck up a strong and harmonious relationship. They are rightly described in the book’s title as being “intimately associated for many years”. 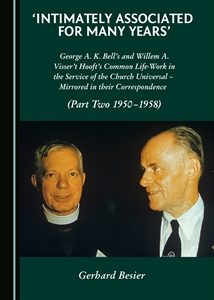 The exchanges by post or telegrams recorded in these volumes are largely drawn from the Geneva archives of the World Council of Churches or from the voluminous Bell papers, now deposited in the Lambeth Palace library in London. The first volume covers the period up to 1949, and the second the final years of Bell’s life up to 1958. The editing by Gerhard Besier is very helpful, since his footnotes give the biographical details of all persons mentioned, as well as bibliographical references to the many scholarly books relating to their endeavors. (There are, however, aggravating lapses in the proof-reading and printing of the English text.) Besier’s introduction is reproduced from the chapter he contributed to The Church and Humanity: The Life and Work of George Bell, 1883-1958 (p. 169-194), edited in 2012 by Andrew Chandler.

Many of these exchanges have to do with the plans for the various meetings of World Council bodies, and discussions about the membership, the place and date, as well as the content. These documents are however not too informative about the results. Obviously when the two men met at such meetings, they had intense verbal discussions and made significant decisions about the World Council’s operations. But these were not recorded in their correspondence at the time, and so are missing from these volumes. This is particularly noticeable with regard to such highly significant meetings as the First Constituent Assembly held in Amsterdam in 1948, when Bell became Chairman of the WCC’s Central Committee. While these documents discuss at length the preparations for this Assembly in August 1948 (p. 365-428), they provide no indication of the important deliberations and decisions taken on that occasion. The same is true for the Second Assembly, held in 1954 in Evanston, Illinois. Equally regrettable is the absence of documents relating to the important meeting in Stuttgart in October 1945, at which both Bell and Visser ‘t Hooft were present, and at which the famous Declaration of Guilt was issued (p. 287-94). Obviously both Bell and Vim played an active part and had extensive discussions with the German leaders, including Martin Niemöller, for whom they had been praying ever since his first incarceration in 1937. But they left no further record of their deliberations or their conclusions about this conference or its historic significance in their correspondence. An equally striking omission is the exchange between Bell and Vim about Bell’s journey to Sweden in May 1942, his meeting there with Bonhoeffer, and the information he gained about the German resistance, which the Bishop then passed on to the British Foreign Secretary, asking for some public gesture of support be given to the anti-Nazi forces in Germany. Eden’s refusal was conveyed to Visser ‘t Hooft in the notable telegram sent by Bell on July 23, 1942: “Interest undoubted, but deeply regret no reply possible”. (Bell’s message is discussed on p. 158 of W.A. Visser ‘t Hooft, Memoirs (London: SCM Press, 1973).) But this calamitous blow to Bell’s hopes for some gesture of support for the German resistance is not mentioned in Besier’s work. In fact, this first volume is silent for the whole period of November 1941 to August 1942.

It would have been helpful if the editor could have inserted short passages to fill such gaps. He could also have directed the reader to look at both of the biographies of Bell by Canon Jasper (George Bell, Bishop of Chichester (London: Oxford University Press,1967)) and Andrew Chandler (George Bell, Bishop of Chichester: Church, State, and Resistance in the Age of Dictatorship (Grand Rapids, MI: Eerdmans, 2016), also Visser ‘t Hooft’s Memoirs (1973), as well as such comprehensive histories as A History of the Ecumenical Movement 1517-1948 (London: SPCK, 1954), edited by Ruth Rouse and Stephen Neil, and its sequel The Ecumenical Advance: A History of the Ecumenical Movement, 1948-1968 (Geneva: WCC, 1986), edited by Harold Fey. Unless these more complete sources are available to be consulted, the usefulness of these two volumes alone will be limited. Libraries may well consider whether the expense is justified.

However, the value of these exchanges is that they fill in the details of the frequent consultations between these church leaders. In particular, they provide information about how the two men dealt with the three principal obstacles they faced in these years. The first was the fear expressed by many churchmen that this new World Council would evolve into a vast ecumenical enterprise which would swallow up the individual entities in some sort of super-church. The second fear, expressed by many more Orthodox leaders, was that this new World Council would produce a new doctrine of Christianity which would override the traditions and individual heritages of these Protestant or Orthodox churches. The third obstacle was the refusal of the largest Christian body, the Roman Catholic Church, to be associated in any way with this new venture. This refusal meant that the vision of a united Christendom, strongly urged by Bell, was thwarted, and still remains incomplete. Not until the Second Vatican Council, i.e. several years after Bell’s death, did the Roman Catholic authorities show a more tolerant and cooperative attitude. But the World Council has yet to overcome the barrier of Rome’s reluctance to belong to this wider ecumenical fraternity.

Nevertheless, it would be true to say that, during the period from 1938 to 1958, i.e. during the fruitful years of cooperation between Bell and Visser ‘t Hooft, the World Council moved from a tentative and provisional beginning to becoming the acknowledged chief instrument and channel of the ecumenical movement. The correspondence contained in the second volume spells out the contexts of these years from 1950 to 1958, including the preparations for the second Assembly meeting in the United States in 1954, at which point Bell resigned his position as Chairman of the Central Committee, and was promoted to Honorary President of the Council. But, as this correspondence shows, he continued to be very actively engaged in the affairs of the Council, even after his retirement in 1958 from the Chichester diocese. In fact he took part in a meeting of the Central Committee in Denmark, and preached a self-critical sermon there only two months before his untimely death in October 1958. The volume concludes with two moving tributes to Bell’s achievements written by Visser ‘t Hooft shortly after Bell’s funeral.