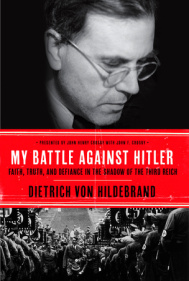 Review of Dietrich von Hildebrand, My Battle Against Hitler: Faith, Truth, and Defiance in the Shadow of the Third Reich

An earlier and shorter version of this book review was published in The B.C. Catholic (Oct 20, 2014).

When Hitler rose to power in 1933, Dietrich von Hildebrand (1889–1977) fled Germany to Austria, where in Vienna he founded and edited Der Christliche Ständestaat (The Christian Corporative State).

“That damned Hildebrand is the greatest obstacle for National Socialism in Austria. No one causes more harm,” fumed Franz von Papen, the Nazi ambassador to Austria, who proposed to Hitler a plan to assassinate Hitler’s public enemy number one. Because von Hildebrand’s anti-Nazi paper was so widely read, von Papen called him “the architect of the intellectual resistance in Austria.”

Thanks to their newest publication, however, that fact may be changing. My Battle Against Hitler, which is being widely disseminated by arrangement with Random House’s Image Books imprint, allows us to read for ourselves the most substantial excerpt of von Hildebrand’s heroic anti-Nazi publications ever available in English.

The book also makes a significant new contribution to the historical record because it chronicles the years from 1921 to 1938 with never before published selections from von Hildebrand’s handwritten memoirs.

“It is an immense privilege,” writes the volume’s main translator, compiler, and editor, John Henry Crosby, “to present to the world the shining witness of one man who risked everything to follow his conscience and stand in defiance of tyranny.”

Many readers will be familiar with the similarly heroic witness of Protestant pastor and theologian Dietrich Bonhoeffer. But most will have not yet heard of the Catholic von Hildebrand, despite the fact that Pope Pius XII is said to have remarked, “Von Hildebrand is the twentieth-century doctor of the Church.”

Although widely quoted and attributed to Pius XII, this remark must be considered apocryphal, since uncontestable documentary evidence for it is not available, as John Henry Crosby insisted in conversation with me. Yet von Hildebrand was a friend of Eugenio Pacelli, so the remark understandably has the ring of authenticity.

But Pius XII is not the only one to direct our attention to von Hildebrand’s historical importance. “There is but one man who can stand with Dietrich Bonhoeffer, both in intellectual brilliance and in bravery toward the Nazis; that man is Dietrich von Hildebrand,” writes Eric Metaxas, New York Times bestselling author of Bonhoeffer: Pastor, Martyr, Prophet, Spy.

In addition, the work of the Hildebrand Project also has more recent papal approval. “I am personally convinced that, when, at some time in the future, the intellectual history of the Catholic Church in the twentieth century is written, the name of Dietrich von Hildebrand will be most prominent among the figures of our time,” Pope Emeritus Benedict XVI once said, speaking as Joseph Ratzinger.

My Battle Against Hitler makes an invaluable contribution to that intellectual history. Its publication has most likely taken so long because, during the last decades of his life, von Hildebrand produced over five thousand handwritten pages of memoirs at the request of his second wife, Alice von Hildebrand, whom he married in 1959.

His first wife, Gretchen, to whom he had been married for forty-five years, had died in 1957. Being over thirty years younger than him, Alice expressed regret at having missed out on so much of Dietrich’s life. Purely out of love, he produced the handwritten pages for her, as an intimate communication of his earlier life.

These memoirs are especially interesting because of the fact that von Hildebrand never sought to promote himself by publishing his memoirs or reprinting his essays against Nazism. It is an essential mark of his character that he was not someone who thought of himself as a hero or as someone who deserved special praise.

In spite of whatever obstacles his habitual modesty may have erected to historical inquiry, thankfully with this book we can now start to review the record for ourselves. As we read his autobiographical revelations to Alice, the immediacy of his recollections transports us into the scene in a most striking way.

Targeted for assassination because of his anti-Nazi publications, eventually von Hildebrand had to flee from Vienna on March 11, 1938. He fled across Europe, from Czechoslovakia to Switzerland to France to Portugal. In 1940, he came via Brazil to New York, where he taught philosophy until 1960 at Fordham University, where he met Alice.

When von Hildebrand first spoke out in 1921 against Nazi ideas, he had been placed on the blacklist of enemies whom they would execute immediately when they came to power. On November 8, 1923, Hitler with six hundred Storm Troopers attempted to seize power in Bavaria with the Beer Hall Putsch. The next morning, after attending 7:00 a.m. morning Mass and before teaching his 9:15 a.m. class, von Hildebrand learned of the unfolding events.

With the help of a Benedictine monk who was also von Hildebrand’s confessor, arrangements were made for him to flee to safety with his wife and son. Fortunately, as the family was in flight, the Nazi putsch was meeting with failure. The Nazi threat was averted and Hitler was sentenced to five years’ imprisonment on April 1, 1924.

Yet during this time, until October 1924, Hitler worked on his infamous book, Mein Kampf, which was published in two volumes, in 1925 and 1926. It coldly outlined his racist agenda and insane political goals. Its title is usually translated as “My Struggle” but could also be rendered as “My Fight” or “My Battle.” Among the papers of von Hildebrand’s memoirs, one outline was found titled Mein Kampf Gegen Hitler, “My Battle Against Hitler.”

It was decided that this would make the best possible title for the posthumously published memoirs, although the book was originally developed by the Hildebrand Project under the working title He Dared Speak the Truth. Now published under its final title, My Battle Against Hitler chronicles the heroic struggle of one of the Catholic Church’s greatest philosophers and his fight against Hitler’s evil ideas. “It is precisely our struggle against evil that God wills, even when we suffer external defeat,” said von Hildebrand in a memorable phrase, alluding to the title of Hitler’s evil book.

“Dietrich von Hildebrand often quotes the Latin saying tua res agitur, which means ‘this concerns you,’” observes Crosby.  “He would say his battle against Hitler concerns you. Why? Because as a human person you are no less called than von Hildebrand himself was to know, to serve, and to bear witness to truth.”

Tags: and Defiance in the Shadow of the Third Reich, Christopher S. Morrissey, Dietrich von Hildebrand, My Battle Against Hitler: Faith, Truth

← Review of Rudolf von Thadden, Trieglaff: Balancing Church and Politics in a Pomeranian World, 1807-1948
Review of J. J. Carney, Rwanda Before the Genocide: Catholic Politics and Ethnic Discourse in the Late Colonial Era →