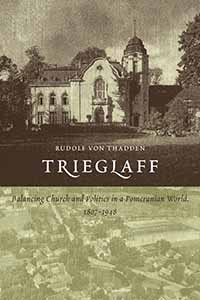 Trieglaff is a small village in rural Pomerania, now in the north-west corner of present-day Poland. Following the Napoleonic wars, it was situated in the kingdom of Prussia and was the seat of the aristocratic family von Thadden, who for a hundred-and-fifty years used the castle and estate as their home base for very active participation in the wider spheres of church and politics. The author of this sympathetic account is a direct descendant in the fifth generation of this remarkable family. He was born and lived in Trieglaff until it was overrun by the advancing Soviet troops in March 1945, bringing to an end this era of Junker ascendancy. His narrative has been drawn from the surviving records, along with personal contacts with relations and tenants, both in Germany and the United States, to give us an attractive and instructive description of Trieglaff and its owners across the years. In contrast to many other books written by Germans exiled from their eastern homelands, Thadden avoids both nostalgia and recriminations, and instead adopts an irenic tone, seeking to stress the virtues of all those involved. The patriarch, Adolf von Thadden, inherited the estate after Napoleon’s defeat and was greatly influenced by the wave of pietistic fervor which swept across Germany in those years. He turned Trieglaff into a center for revivalist meetings for the whole of Pomerania. This was a strongly conservative faith which maintained an uncritical biblical fundamentalism and often expressed itself in sectarian excesses. But it sought to uphold the witness of the individual believer and to prevent the incursion of rationalist or secular ideas. In particular, the Trieglaffers resented the top-heavy controls exercised over the church by state officials, who obeyed the commands of the monarch King Frederick William III in uniting the Lutheran and Reformed adherents into one United Prussian Church. The result was a clash in the village and the secession of a group true to their former loyalties and calling themselves Old Lutherans. They even built their own church at the other end of the village which still survives today.

This determination to maintain the historic orthodoxy of their faith and to thwart all attempts at modernization for liberal or political reasons remained the hallmark of Trieglaff’s conservatism. It was to be revived again a hundred years later, after the Nazis came to power, when the so-called “German Christians” attempted to change both the doctrine and the practices of the church to accommodate Nazi ideology. The then owner Reinhold von Thadden became a leading figure in the anti-Nazi Confessing Church in the 1930s, and made Trieglaff a bastion in this cause. As a young student he had been attracted by the witness of the World Student Christian Federation and by the theological writings of Karl Barth, which he saw as a call to return to the deep roots of the Christian faith which alone could counter the current crises in the political and international arenas.

But at the same time, the whole Thadden family was imbued with the Prussian tradition of loyalty to the state. In both wars they loyally sought to enlist in the best regiments, and fully accepted Hitler’s justifications for the campaigns against the godless communists of the Soviet Union. In fact, three of the author’s elder brothers lost their lives while fighting against the Soviet troops on the eastern front.

By contrast, Reinhold’s elder sister Elisabeth demonstrated her obstinate conservatism by strongly disdaining the whole Nazi movement. In September 1943, while at a private tea party, she made some incautious remarks for which she was denounced to the Gestapo. This led to her arrest, imprisonment in Ravensbrück, and in September 1944, to her execution. This heart-wrenching news only increased the conflict of loyalties which assailed the whole Thadden family. As Reinhold later meditated, these events forced him to “consider the share contributed by our Christian conservatives, our patriotic classes to the political conceptions and the monstrous repercussions of the former regime, down to our militaristic thinking and acting, in a word, our share in the actual guilt of our people.”

As it happened, Reinhold had served as a senior officer in the German military occupation forces in Belgium and France. But when he returned to Trieglaff he was immediately arrested by the Soviet authorities and taken off to serve time in a prisoner-of-war camp in northern Archangel. Luckily he was released after several months there, and repatriated to Berlin. Only a few days later he was joined by his wife and young son Rudolf, who had been expelled from their home in Trieglaff by the newly arrived Polish authorities. The joy of being reunited was however marred by the awareness that they could never hope as a family to return to Trieglaff again.

In later years, Reinhold dedicated himself to the new venture in German Protestant life, namely the institution of biennial Church Rallies, which drew adherents from all parts of the country, including to begin with East Germans, for a week of discussions about the witness and future commitments of the church. These rallies proved to be highly popular, and indeed still continue. Reinhold’s service in this cause was marked by his determined advocacy of both repentance and reconciliation. He came to be revered as the patron of the now much humbler Protestant church, which sought out ecumenical contacts and adopted policies of social reform in deliberate repudiation of the nationalistic and militaristic attitudes of the past.

His son Rudolf, the author of this book, studied history and theology, and opted to enter academic life. He has since had a distinguished career as a professor of modern European history at Göttingen University. As this reminiscence of his family’s connection with Trieglaff shows, he also wanted to bring his father’s message of reconciliation and international friendship back to the place of his early years. But until 1978 Germans were forbidden to go back across the Oder River and revisit Pomerania. Once that restriction was lifted Rudolf found opportunities to take his wife and family to see his original home and to strike up friendships with the new occupants of the village and estate. Despite the denominational and language barriers, he succeeded in this aim, and returned on a number of occasions in later years. Largely at his initiative, and in memory of all those Germans forcibly expelled in the immediate post-war years, Rudolf arranged for a large-sized bronze plaque to be installed at the entrance of the Old Lutheran, now Catholic Church, which was unveiled in September 2002. The text of the plaque reads, in both Polish and German:

Pax vobis (Peace to you)

In memory of the many generations of German Trieglaffers who lived here and found happiness,

Who make their home in Trieglaff today.

This plaque surely stands as a witness to the power of Trieglaff’s historic traditions to overcome the legacy of domination, conflict, ethnic cleansing and exile, and to build new bridges of hope for the future.

The book has been excellently translated into English by Stephen Barlau, and includes a useful glossary of terms used to describe the structures of the German Protestant Churches.

← Conference Report: Religion in Germany in the 20th Century: Paradigm Shifts and Changing Methodologies
Review of Dietrich von Hildebrand, My Battle Against Hitler: Faith, Truth, and Defiance in the Shadow of the Third Reich →