In this meticulously detailed and well-differentiated dissertation, Jonas Hagedorn discusses the early published work of Oswald Nell-Breuning, a German Jesuit social theorist. Before engaging the substance of Hagedorn’s analysis, it is helpful to begin with the words of noted theologian Josef Mausbach, Professor at the University of Münster, who provided the first assessment of Nell-Breuning’s dissertation. Mausbach wrote, “the abstract nature and the high [intellectual] level of the work is such, that only a narrow circle of theologically interested economists and economically prepared theologians can truly access this work.” (267) One could say the same about Hagedorn’s work. 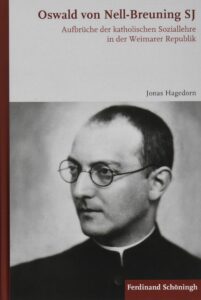 The introduction lasts the first seventy pages, and not until almost halfway through the volume does the discussion focus on Nell-Breuning. The previous pages explained the state of Christian solidarity in the 1920’s, describing Nell-Breuning’s definition of the term as post-liberal corporatist solidarity, but not fascist or reactionary. Hagedorn explains in detail the distinctions between the more romanticist-idealist Catholic thinkers in Vienna and the northern German approach to Catholic solidarity, which better reflected the economic realities of the 1920’s. Nell-Breuning was more comfortable with the “Kölner Richtlinien” of 1926, which explicitly accepted Catholic trade unions and much else in Catholic social teaching that would integrate Catholics in the broader economic and labor concerns of the times. For example, the Austrians denied any compatibility between capitalism and Christianity. At the same time, the commission established by Cardinal Schulte, Archbishop of Cologne, sought to find a way for Catholics, employers, employees, and others to function in the Weimar Republic’s economic conditions. Nell-Breuning also advocated ecclesiastical recognition of Christian trade unions and not just Catholic workers’ associations (katholische Arbeitervereine) led by priests.

Nell-Breuning’s dissertation discussed the ethics of stock market speculation. The Jesuit distinguished between speculation designed to protect against unexpected losses, which Hagedorn describes as “hedging,” and speculation out of greed. The principal distinction underlying Nell-Breuning’s thinking is between revenue sought for a moral purpose and income aimed primarily to increase wealth and possession.

Sometimes, the reader perceives that Hagedorn felt compelled to discuss Nell-Breuning’s view on almost every economic facet of Catholic social teaching. The breadth of teaching included employee-labor relations, the morality of goods pricing, the nature and limits of the welfare state, and more. Hagedorn shows how Nell-Breuning strove to balance the individual’s responsibility and the community’s solidarity. For example, Hagedorn defended the welfare state as an institution by which the community meets the needs of those who cannot afford the minimum necessary for existence through no fault of their own. However, he vehemently rejected a community that provided for all without expectation of self-reliance, which he called the Versorgungsstaat. Hagedorn insisted on prices that covered material costs and adequate wages for all employees, and a moderate reward for the employer. He rejected prices dictated purely by the market. Nell-Breuning’s understanding of appropriate and fair employer-employee relations demanded workers complete an honest day’s work, but strongly supported Christian trade unions, even over clerically led Catholic workers’ associations. Finally, Nell-Breuning’s understanding of the purpose of property, to serve the bonum commune, has become accepted in Catholic teaching. Nell-Breuning drew on the full range of papal teaching from Leo XIII onward.

One of the strengths of Hagedorn’s work is the explanation of other contemporary social justice thought, both within and outside of Catholicism. Nell-Breuning drew on Marx and other socialist thinkers without any sympathies for communism. The primary targets of his criticism, and he avoided no controversy, were Viennese and Austrian Catholic social justice theorists. Primarily, Nell-Breuning dueled with Othmar Spann and Joseph Eberle of Schönere Zukunft, but also with Anton Orel and Eugen Kogon. Nell-Breuning rejected the idealistic-romantic notions of the Viennese thinkers. His background in economics compelled him to remain rooted in practical measures to secure the ideals of Catholic social teaching. Also, he would not share the Viennese group’s rejection of capitalism and democracy.

Within a year of defending his dissertation, Nell-Breuning was asked to produce a foundational draft to form the basis of a new social encyclical. Section by section, Hagedorn meticulously analyzes the evidence of Nell-Breuning’s draft in the published version of Quadragesimo Anno, Pope Pius XI’s social encyclical of 1931. Nell-Breuning’s nuanced critique of capitalism, his ability to appreciate the strengths of the capitalist economy while seeking to correct its inequities, his appreciation for socialism’s analysis while rejecting its socio-economic prescriptions. In those interwar years, Nell-Breuning analyzed and recast the framework of Catholic social teaching. He discussed them all, and Hagedorn summarizes and analyzes the vast scope of Nell-Breuning’s comments. In the bibliography, Nell-Breuning’s works take up fifteen pages, and Hagedorn has read them all.

Hagedorn ends his analysis of Nell-Breuning’s thinking by pointing to his fundamental resistance to National Socialism. In 1933, he criticized the National Socialist falsification of corporatism. In the summer, however, Nell-Breuning proved his loyalty to the hierarchy in Germany and Rome by publishing an article welcoming the Concordat. In the article, however, Nell-Breuning carefully hid his quite incisive critique, according to Hagedorn. He cited the admonition of Saint Ambrose to Emperor Theodosius and some of the Catholic heroes of the Kulturkampf. (436) To any theologically conscious Catholic, these names sufficed to highlight Nell-Breuning’s opposition to the regime. From 1934 until 1945, Nell-Breuning published little.

There is only little to criticize in this work. One might argue that Hagedorn’s text is better used as a reference than a narrative with analysis. The details prevent any reviewer from addressing all the topics in their highly developed nuances. Furthermore, Hagedorn’s work is not for those uninitiated into Catholic social teaching or the socio-economic theory of the Weimar Republic. Finally, this work is not for those seeking a biographical analysis of Nell-Breuning, nor for those seeking a discussion of the shifts in Nell-Breuning’s thinking in the post-war period.