Review of Kevin P. Spicer and Martina Cucchiara, eds. and trans., The Evil that Surrounds Us: The WWII Memoir of Erna Becker-Kohen

The story of Erna Becker-Kohen provides a welcome and much-needed contribution to the scholarly literature on survivors of the Holocaust. Becker-Kohen’s memoir, written as a diary, allows historians to explore the experiences of someone who was labelled by the Nazi regime as “privileged,” demonstrating how persecution, discrimination, and threats of death impacted such persons, wiping away any sense of privilege whatsoever. Spicer and Cucchiara have added to our understanding of what life could be like for a neglected category of people: Catholics of Jewish heritage. Erna’s simple and straightforward style of writing conveys a sense of immediacy, with no knowledge of what the future may have in store for Erna, her Catholic Aryan husband, Gustav Becker, and their small child, Silvan. Readers may take the journey with Erna, hoping that all three family members will outlast the Nazi horrors. 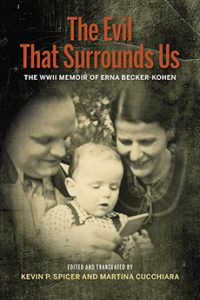 Erna’s first entry at Christmas 1937 begins with an announcement: she and her Catholic husband, Gustav, are expecting their first child in March. By this time, Hitler had been in power in Germany for four years. Erna and Gustav had married in 1931 while Erna was still Jewish and Gustav Catholic. As Spicer and Cucchiara note, the newlyweds could have had no idea then that their religious heritages would come to matter so very much to the outside world. In the early phases of Hitler’s chancellorship, Gustav continued working in an engineering company. His status as a pure Aryan accorded Erna a measure of protection. However, as the years of the Third Reich continued, Gustav and Erna would come to see that the so-called “privileged” status of their union was really no protection against an increasingly hostile German society. What adds yet another layer to this fascinating story is that Erna had converted to Roman Catholicism in 1936. She longed for community in the face of such social isolation and persecution and she took increasing solace in her Catholic faith.

Throughout the memoir, Erna records the challenges she confronted. She and Silvan are separated time and again from Gustav—first due to neighbors and their discriminatory remarks, then due to aerial bombardments in Berlin, which lead Erna and Silvan to make their way to potential safety in the Tyrol. From the beginning of these separations, Erna recognizes that she and Silvan are in grave danger and that she must seek out help in order to survive on the run. Her careful observations show us how her baptism as a Catholic did not necessarily translate into assistance from Catholic Aryans. From an October 1941 entry, “For a while I was a member of the church choir in our little parish. Singing has always given me much joy, but now I had to give it up because a few singers did not like the idea of a Jew participating. I always remained modestly, even shyly, in the background. Still, I am not wanted” (46). Despite being told by a priest that she was “like a leper” and would have to stay away from other people, Erna continued to note in her writings whenever she found what she referred to as “the true spirit of Christianity.” In an entry labelled late February 1942, Erna encounters a woman who had tried to befriend her. “Frau Herberg came to see me to inquire why I have not come to see her… She consciously stands by me and insists that I continue to come and visit her. This once again gives me courage and the certainty that Christianity lived makes people strong and good” (48).

But Erna’s faith in people living the message of Christianity would be tried many times over. In March 1943 the Gestapo paid Erna a visit at the family’s apartment. She was arrested and taken to a collection point for Jews in the Grosse Hamburger Strasse. After her release, her fears for her family increased, particularly her fear of being separated from her son and what might become of him if she were taken away to a camp. She and Silvan had to flee their home in Berlin on June 15, 1943, with only one hour to pack as the Nazis were restricting purchases of train tickets. A kind priest, Father Erwin, advised Erna to take Silvan by train before the restrictions went into effect. Thanks to Father Erwin, Erna and Silvan were able to find refuge in a remote corner of Tyrol in August 1943. Once in the Tyrolean village, Erna finds Catholics willing to help her but she also quickly notes that the mayor of the village is a fanatical Nazi. Erna understands that, as nice as the local Catholic villagers are, if the mayor finds out she is of Jewish ancestry, they will not be able to help or protect her.

In addition to Erna’s recollections of her encounters with both helpful as well as awful people, she provides information about the fate of her extended Jewish family. Erna’s mother, who felt deeply betrayed when Erna converted, went to live in Belgium with her son. While she died of natural causes, the fate of many of Erna’s relatives, including her brother, reveal stories of persecution, arrest, imprisonment, and death. Erna’s sister and brother-in-law emigrated to Chile and so they survived the war. Central to Erna’s story is the fate of her loyal husband, Gustav.

Throughout the memoir, Gustav appears as brave and loyal to his wife and son. In the early years, Gustav takes on traditional “women’s work” by stopping after work to do the grocery shopping- primarily because he is an Aryan and is therefore entitled to more food than Erna is as a Jew. He attempts to find safe places with nuns in convents for Erna, and sends her whatever he can while she and Silvan are moving from place to place for safety. As the Nazis came closer and closer to defeat in the war, they attempted to drive apart those individuals who remained steadfast to their “non-Aryan” partners, refusing to divorce them. To that end, Gustav was ordered to report to a work camp to force him to separate from Erna, thus removing her designation of “protected status.” Gustav refused and after performing hard labor he contracted skeletal tuberculosis. He survived the war, but was confined to a plaster body cast for years, and ultimately died from the harsh conditions under which he suffered because of his dedication to his marriage. Although Gustav and Erna were reunited before his death, Gustav never again experienced joy in life. He died in 1952.

As Erna struggled in the post-war world, her memoirs note how she felt homeless and sickened by the people who had once tormented her and rejected her. Now that the war was over, she saw the hypocrites rushing to befriend her to prove that they had not turned away from her when she most desperately needed their assistance. Some of Erna’s faith in Christianity and more broadly in humanity was restored to her through her interactions with Father Paul, who “has proved to me repeatedly that there is no contradiction between Judaism and Christianity” (125). Erna seems to have found some true inner peace when she penned:

But why do I nonetheless record this memory? First to impress upon mankind that something like this must never happen again. We, too, want to be recognized as human beings, and if you can look upon Jews without any racial conceit, then you have solved half of the Jewish problem. Second, to confirm that I encountered those forces that unyieldingly fought for human rights and dignity only where the Christian teaching—“There is neither Jew nor Greek, there is neither slave nor free person, there is not male and female; for you are all one in Christ Jesus” (Galatians 3:28)—was not mere words but was consciously lived (126).

By giving the English-speaking world access to Erna Becker-Kohen’s memoir, Spicer and Cucchiara have provided us all with insight into what it was like to be a Catholic of Jewish descent in a time when most people could only see a “Jew” in front of them. Like the diary of Victor Klemperer, Erna’s account allows us to experience her world—with all of its ugliness as well as all of its extreme acts of kindness. The editors have also provided a substantial amount of background material in both their introduction and their footnotes so that readers will be able to place Erna’s memoir into the larger context of Nazi laws and the persecution of Catholics of Jewish heritage. This is a valuable addition to the scholarly literature, deepening our understanding of an understudied group of persecuted people.

← Article Note: Andrew H. Beattie, “‘Lobby for the Nazi Elite’? The Protestant Churches and Civilian Internment in the British Zone of Occupied Germany, 1945–1948”
Review of Lee B. Spitzer, Baptists, Jews, and the Holocaust: The Hand of Sincere Friendship →