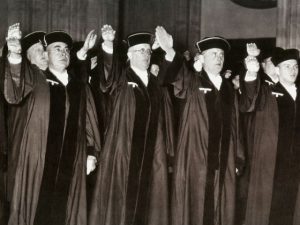 In post-WWI Germany, law had been  a most respected entity, with the country thriving thanks to its most capable lawyers and judges, many of them Jewish. In 1933, no law could inhibit the Third Reich’s political and military rise to power. In a step-by-step process, the National Socialist government dismantled constitutional law, usurped justice and created a lethal totalitarian system that soon engulfed Germany and all of Europe. Redefining the nation as a pure political and biological organism, the Nazi government imposed legislation that reinforced its ideological program in all aspects of German life, with a focus on race, business, religion and medicine. Filmed at Boston College during a conference on Nazi law, as well as  in Nuremberg, Munich and Dachau, this documentary relies on the expertise of scholars from Germany, France, Israel and the US. They come from the areas of medicine, law, Jewish Studies, theology and other disciplines.

← Call for Papers: Religion and Ethno-nationalism in the Era of the World Wars
Conference Report: Faith and the First World War, University of Glasgow, 21-23 July 2016 →