Letter from the Editors (Spring/Summer 2022)

Letter from the Editors (Spring/Summer 2022)

After a long hiatus, once more the editors are pleased to present a new issue of Contemporary Church History Quarterly. This issue–a combined spring/summer volume–begins with the translation and reprint of an article by Manfred Gailus reassessing the high-profile Protestant churchman Otto Dibelius. 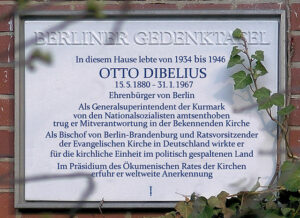 Three notes follow the reviews. Kyle Jantzen reports on two studies relating to Mennonites, Nazism, and the Holocaust, one a special issue of the Mennonite Central Committee journal Intersections and the other a Ben Goossen research article on Mennonite novelist and Holocaust denier Ingrid Rimland. Finally, Sarah Thieme reports on a conference devoted to Catholic historical research in Germany.

Finally, it is with sadness that I announce that long-time editor Matthew Hockenos is resigning from the CCHQ editorial team. Matthew was an important member of the group that converted the late John Conway’s newsletter into what is now Contemporary Church History Quarterly and has been an anchor on the editorial team ever since. We wish him well in his scholarly work, and look forward to reading his future publications on the German churches during and after the Hitler era.

Once again, we hope this issue of CCHQ interests and educates, and look forward to continuing to bring you news, reviews, and commentary on contemporary religious history with a focus on Germany and Europe in the twentieth and twenty-first centuries.

← The Old Picture Is No Longer Valid: Why the Time Is Ripe for a Reassessment of the Ecclesiastical Figure of the Century, Otto Dibelius