Once again, the editors of Contemporary Church History Quarterly are pleased to present a new issue of book reviews and reports pertaining to the history of twentieth-century German and European Christianity and Christian churches. In this issue, we consider a mix of Catholic and Protestant individuals and institutions. 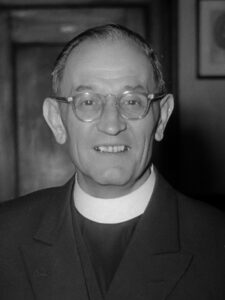 Kevin Spicer reviews Jonathan Huener’s “definitive study of the Catholic Church in western Poland under German occupation.” Noting that scholars have long considered “the Warthegau as a blueprint of the Nazi state’s plans of actions for the future of all churches in Germany,” Spicer explains how “Huener situates his analysis of the church’s plight in the Warthegau clearly in the Nazi state’s Kirchenpolitik and Volkstumskampf or ethno-racial struggle.” Still, Spicer concludes (quoting the author) that the Polish church “survived more than five years of Nazi occupation and emerged in 1945 as an institution with significant moral capital.”

Christopher Probst examines Manfred Gailus and Clemens Vollnhals’ edited volume on the famous Tübingen New Testament scholar Gerhard Kittel, who is “as well-known for his anti-Judaic and antisemitic rhetoric in Die Judenfrage (The Jewish Question; 1933) as he is for being the editor until 1945 of the influential Theologisches Wörterbuch zum Neuen Testament (Theological Dictionary of the New Testament).” Topics include the legacy of Kittel in Tübingen; German Protestant reactions to 1933 and the rise of the Nazis; Kittel’s background, education, and early career; Kittel’s works on Jews and Judaism during the Third Reich; the relationship between Judaism and Christianity in German scholarship; the connection between Kittel’s students and the Eisenach Institute for Research into and Elimination of Jewish Influence in German Church Life; Kittel’s international reception; and Kittel’s My Defense (1946).

Beth Griech-Polelle reviews Traude Litzka’s book, The Church’s Help for Persecuted Jews in Nazi Vienna, in which the author examines the work of Father Ludger Born, head of the Aid Office for Non-Aryan Catholics, an agency supported by Cardinal Theodor Innitzer, Archbishop of Vienna. Born and his staff (largely women, some of them “non-Aryan” Catholics themselves) worked to help converted Jews navigate the bureaucracy of emigration. Over time, Born and his colleagues worried less about the nature of conversion, baptizing Jews in large numbers, in order to help them emigrate. After the war made emigration impossible, the Aid Office turned into a social welfare agency, procuring food, clothes, and other supplies for its clients. As Griech-Polelle concludes, Litzka “is to be commended for attempting to uncover the untold stories of assistance given in Vienna by religious men and women.”

Robert Ericksen introduces us to Ian Harker’s short work, Pearls before Swine: The Extraordinary Story of The Reverend Ernst Biberstein, Lutheran Pastor and Murder Squad Commander. Biberstein was tried and convicted at Nuremberg for his role as a commander of a mobile killing unit which murdered 2,000 to 3,000 Jews. But before he became a Holocaust perpetrator, Biberstein had been a Lutheran pastor near Hamburg. Harker outlines Biberstein’s entrance into the Nazi movement and career path that took him into the Sicherheitsdeinst (Security Service, or SD) of the SS, where he worked for Reinhard Heydrich in Berlin, then in Upper Silesia and Ukraine, where he was part of the Einsatzgruppen (mobile killing units). As Ericksen concludes, “The life of Ernst Biberstein reflects a number of important issues involving Christians in Nazi Germany, from the level of their actual enthusiasm for and participation in the regime to the postwar difficulties—persisting for at least a generation—in coming to grips with the realities of that past.”

Doris Bergen examines Alexander Reynolds’ account, To War Without Arms: The Journal of Reverend Alexander Reynolds, May – November 1944: The D-Day Diary of an Army Chaplain, edited by Simon Trew. Bergen offers high praise for this work, noting its relevance for the study of “World War II, the Normandy campaign, military chaplains, or contemporary church history.” Reynolds provides the context for Normandy invasion, the role of British Army chaplains, and the harrowing experience of D-Day. Chaplains played a significant role under British General Bernard Law Montgomery, who, editor Simon Trew writes, “appears to have believed quite sincerely that religious faith provided the underpinnings for success in battle.”

Three fascinating reports round out this issue of CCHQ. Suzanne Brown-Fleming highlights a webinar on the opening of the Pius XII archives and Holocaust research. Björn Krondorfer reports on a webinar comparing various historic and contemporary expressions of Christian nationalism. And Michael Heymel offers a detailed review of a recent German conference on Martin Niemöller and his international reception.

This issue of Contemporary Church History Quarterly also brings with it significant changes to our editorial team. After many years of service, Doris Bergen (University of Toronto) and Heath Spencer (Seattle University) are resigning as editors. Their careful reviews and dedicated support for the work of the journal will be missed, though we hope that they will continue to write for the journal occasionally. In particular, Doris played a key role in the early days of the journal, when several of us decided to reimagine John Conway’s monthly newsletter into an open-source online journal. Doris and Heath, many thanks for your fine work over the years. We will miss you!

In the March issue, we put out a call for new editors and were delighted by the strong interest from a good number of fine scholars. Recently, the editorial team decided to bring five new editors on board: Dr. Benedikt Brunner, Leibniz-Institut für Europäische Geschichte, Germany; Dr. Björn Krondorfer, Northern Arizona University, United States; Dr. Martin Menke, Rivier University, United States; Dr. Dirk Schuster, Universität Potsdam, Germany; and Dr. Sarah Thieme, Westfälische Wilhelms-Universität Münster, Germany. You can find out more about them and their work on the journal’s About page. We appreciate their excitement about the journal and look forward to their regular contributions over the coming years.

And to you, our readers, we offer our thanks for your ongoing interest in the journal.

← Review of Jonathan Huener, The Polish Catholic Church under German Occupation. The Reichsgau Wartheland 1939-1945
Webinar Announcement: The Holocaust-Era Archives of Pope Pius XII: The State of the Question →