We are delighted, after several months of upheaval, to finally be able to publish a new issue of Contemporary Church History Quarterly. Articles, reviews, and notes from a wide range of scholars–including two guest contributions–cover several figures and events key to the history and legacy of the German “church struggle” of the Nazi era. 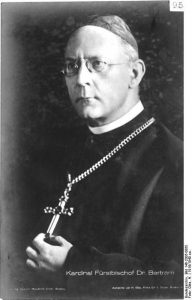 Olaf Blaschke of the University of the University of Münster and Mark Edward Ruff of St. Louis University analyze the history and text of the recent statement issued by the German Catholic Bishops Conference: “Deutsche Bischöfe im Weltkrieg. Wort zum Ende des Zweiten Weltkriegs vor 75 Jahren”  (“German Bishops in the World War: Statement on the 75th Anniversary of the End of the Second World War”). In new ways, they find, the Catholic hierarchy in Germany is coming to terms with their responsibility for supporting the Nazi war of conquest and annihilation.

Next, Hansjörg Buss of the University of Göttingen reviews Benjamin Ziemann’s new biography of Confessing Church leader Martin Niemöller, after which Robert Ericksen assesses one of Niemöller’s previously unpublished writings, Gedanken über den Weg der christlichen Kirche, a comparison of Protestantism and Catholicism written during Niemöller’s incarceration in concentration camp, at a time in which he was seriously considering converting to Catholicism. In keeping with the theme of church leaders, Andrew Chandler reviews German theologian (and former Protestant Bishop) Wolfgang Huber’s new biography of Dietrich Bonhoeffer, which draws heavily from Bonhoeffer’s own writings.

Other reviews by Victoria Barnett examine Rebecca Scherf’s work on the relationship between the German churches and Nazi concentration camps and Gerhard Ringshausen and Andrew Chandler’s publication of the correspondence between Anglican Bishop George Bell and German refugee Gerhard Leibholz, who was married to Dietrich Bonhoeffer’s twin sister. Christopher Probst comments on Andrea Hofmann’s article about Martin Luther’s presence in First World War sermons, and also writes of the misuse of Luther in recent German right-wing election campaign propaganda posters. Finally, we return to the topic of Martin Niemöller and specifically his famous quotation about indifference–the subject of a recent United States Holocaust Memorial Museum Facebook Live presentation.

We thank you for your patience with CCHQ during the coronavirus pandemic, and look forward to resuming our normal publishing schedule in September.

← Ordinary Men and Ordinary Bishops: The Catholic Church during the Second World War
The German Bishops in the World War: The English Text →