Sometime in the late 1980s, when I was a PhD student researching the “German Christian” movement, someone told me about Dietz Bering’s Der Name als Stigma. Antisemitismus im deutschen Alltag 1812-1933 (1987; published in English in 1992 as The Stigma of Names). The book was a revelation, highly original and insightful, and reading it felt like a special secret, a feeling I would also get with Michel-Rolph Trouillot’s Silencing the Past: Power and the Production of History (1995) and Annette Wieviorka’s The Era of the Witness (1998), though I subsequently learned that all of these books were widely known and admired. 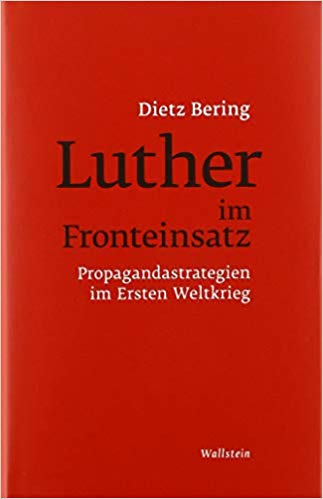 More than thirty years later, Bering is an acknowledged public intellectual whose 2010 book, Die Epoche der Intellektuellen, attracted significant attention. This newest book, about the uses and abuses of Martin Luther in World War I, does not have the cachet of a surprise discovery, but it shares with The Stigma of Names the author’s detailed attention to language – he is a linguist by training – his patience for quantitative and qualitative analyses, and a knack for moving from carefully presented evidence to bold conclusions. In this case, Bering examines a body of World War I writing in which Martin Luther features, literally counting the number of times certain words and phrases appear – “hammer”, “hero”, “manliness”, and many more – and layers his findings onto a sketch of the war as experienced by Germans. The result is an insightful elucidation of the transformation, or more aptly, weaponization, of the defiant monk and reformer into a nationalist propaganda, morale-boosting tool. As Bering shows, that process unfolded in one world war and left the Protestant reformer and his avatar primed for deployment in another.

Luther im Fronteinsatz is a tightly structured, amply documented essay on the origins of an ideology rather than a sustained historical investigation. Readers familiar with recent works by Christopher Probst, Hartmut Lehmann, Manfred Gailus, and Lyndal Roper, or the older scholarship by Martin Greschat, Gottfried Maron, and others are unlikely to learn anything new about Luther or his legacies in the twentieth century. Nor does the book re-interpret the social history of the Great War and its fall-out in Central Europe, as illuminated by Belinda Davis, Roger Chickering, Maureen Healy, Deborah Cohen, Annelise Thimme, and many others in a massive historiography in English and German. (Of the authors named in this paragraph, only Roper and Maron appear in Bering’s bibliography.)

Yet Bering’s book is still valuable for its compelling articulation of a process that injected Luther into the “idea of 1914,” metonymized as the “hammer” and lauded as the original “German personality” and the embodiment of “German loyalty.” Confronted with the setbacks and defeats of 1917-18, Bering shows, this set of images ossified in a new propaganda initiative, “instruction for the Fatherland” – Vaterländischer Unterricht. Bering devotes most attention to the leaders and shapers of a dynamic discourse: Ernst Troeltsch, Heinrich von Treitschke, Adolf von Harnack, and other prominent men. But he also examines opinion multipliers including military periodicals such as the Feldpressestelle, Deutsche Kriegswochenschau, Karnisch-Julische Kriegszeitung, and the Kriegszeitungen of the 4th, 7th, and 10th armies, as well as grassroots popularizers, notably local pastors. Throughout his analysis, Bering weaves in a dialectical component. As he shows, enemy propaganda fueled a feedback loop: for example, accusations that German soldiers were unthinking automatons sparked an insistent emphasis on the concept of “freedom,” in particular “German freedom,” in contrast to the supposed shallow and individualistic freedoms of the French with their violent revolutions and British with their fixation on “Gold und Geld”.

Bering makes a convincing case, and the book is a lively read, especially the crisp opening chapter, “Deutschland auf der Suche nach sich selbst”. Still he raises many questions that remain unaddressed or are discussed only briefly. One involves Catholics. Given the many Catholics in Germany and the much more pronounced Catholic presence in the Austro-Hungarian military, they merit further attention. Bering does make some effort to show how the Luther-myth was adapted for a German Catholic audience, but it is not commensurate with the magnitude of the challenge. Patrick Houlihan’s study of Catholicism and the Great War: Religion and Everyday Life in Germany and Austria-Hungary, 1914-1922 (2017) would have been a useful conversation partner.

Another underexamined issue is antisemitism. In The Stigma of Names, Bering revealed a deep and nuanced understanding of how anti-Jewish assumptions, messages, and provocations were built into Christian signs, symbols, and names. This book includes some astute observations about how anti-Black and anti-Turkish racisms functioned in the weaponized Luther system but has surprisingly little to say about antisemitism. Yet antisemitism hovers just outside the frame in many of the quotations analyzed, from the stereotype of the materialist British (and their shadowy Jewish cousins) obsessed with “money and gold,” to the emphatic addition of German to modify the nouns “courage”, “character”, “loyalty”, and “faith”, and to exclude Jews and others constructed as the non- or anti-Germans. Luther’s 1543 screed, On the Jews and Their Lies, is not mentioned in the book, which made me wonder whether German World War I propagandists deliberately avoided that text or Bering chose not to address it.

A third underexplored topic involves reception. How did soldiers, their families and friends receive this instrumentalized version of the familiar figure of Luther? Bering observes that class divisions and failing morale were the reasons German opinion leaders adopted aggressive mythmaking in the first place. Censors found letters between home and fighting fronts to be rife with bitter complaints from people who felt hungry, used, and disregarded by the warmakers. Did the men and women who wrote such letters buy into the weaponized Luther? Did they ridicule and lampoon it, which must have been tempting given the heavy-handedness of its promoters? Observers were certainly aware of the religious elements in German chauvinism, as depictions of “Prussians” in Jaroslav Hašek’s 1921 novel, The Good Soldier Švejk, make hilariously clear.

John Conway, the founder of this journal, always insisted it was the discrediting of organized Christianity in Germany during World War I, with the jingoistic insistence that “God is on our side,” that opened the way for the ravages of National Socialism. This claim and Bering’s interpretation open a series of question central to any critique of populism. Were ordinary Germans and ordinary Christians victims or dupes? Were they silenced, manipulated, or won over so that they themselves become proponents of the nationalist bile? As an academic, I have been conditioned to believe that diagnosing a problem, unpacking a discourse to reveal its construction, takes away its power. But does that claim still hold if an audience prefers the discourse, lies and all, to its informed analysis?

← Review of Sabine Arend and Insa Eschebach, eds., Ravensbrück: Christliche Frauen im Konzentrationslager 1939-1945
Was There a Religious Revival in the “Third Reich”? →