Letter from the Editors (December 2019)

Letter from the Editors (December 2019)

Although this issue of Contemporary Church History Quarterly has been somewhat delayed, we believe the content will be worth the wait. We are pleased to lead with an editorial from Manfred Gailus on the notion that 1933 in Germany marked the beginning of a kind of religious revival, a notion I can attest to in my own research on local church districts in various parts of the Reich. Several reviews follow from Doris Bergen, Christina Matzen, and Kyle Jantzen, on works relating to Luther as a propaganda figure in the First World War, Christian women in the Ravensbrück concentration camp, and a theological analysis of Dietrich Bonhoeffer’s resistance thinking. 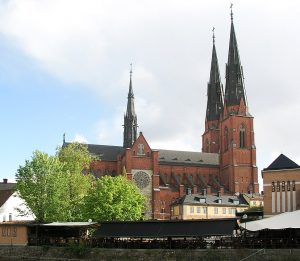 Uppsala Cathedral, seat of the Archbishop of Uppsala. By Håkan Svensson (Xauxa) – Own work, CC BY 2.5, https://commons.wikimedia.org/w/index.php?curid=1791946

Several interesting notes follow: Suzanne Brown-Fleming guides us into the upcoming opening of the Vatican Archives and assesses a recent article on Vatican responses to the round-up of Jews in Rome in October 1943; Robert Ericksen offers an in-depth report on the Kirchliche Zeitgeschichte conference and this year’s theme of “Life-Line or Collaboration? Active contacts with churches in totalitarian societies”; Christina Matzen reports on recent conference papers devoted to Christians in the German Wehrmacht.

Lastly, I would like to take this occasion to welcome a new member to our CCHQ editorial team: Dr. Samuel Koehne from Melbourne, Australia. Dr. Koehne has written a series of provocative and insightful articles on the relationship of Nazism to religion, and in the process coined an extremely useful new concept: “ethnotheism,” which he understands as “religion defined by race and the supposed moral or spiritual characteristics that the Nazis believed were inherent in race” (from his article “The Racial Yardstick: “Ethnotheism” and Official Nazi Views on Religion,” German Studies Review 37.3 (2014): 575–596). Koehne teaches at Trinity Grammar School in Kew, Victoria, and is continuing his research in areas related to völkisch literature, Nazi leaders Alfred Rosenberg and Hans Schemm, and Hitler’s Mein Kampf.

← Was There a Religious Revival in the “Third Reich”?
Letter from the Editors (April 2020) →