Letter from the Editors (September 2019)

Letter from the Editors (September 2019)

It gives me great pleasure to present the newest issue of reviews and notes related to contemporary German and European religious history. In this the 25th year of Contemporary Church History Quarterly (dating back to the late John Conway’s ACCH newsletter), we are happy to continue to serve academics and interested lay readers with commentary on the latest scholarship in the field. As we have emphasized this year, the issues and events our editors and guest contributors write about remain relevant in our current age of turmoil over identity, exclusion, and the role of religion in politics and society. 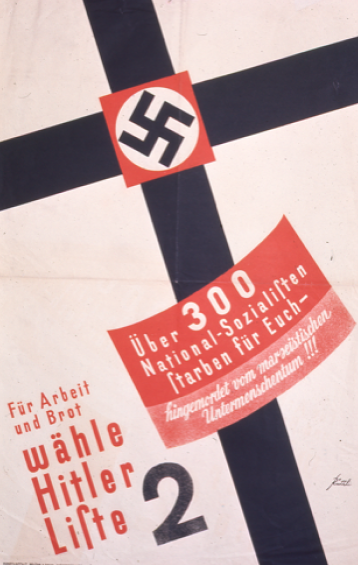 1932 Nazi election poster. “Over 300 National Socialists died for you…” An equation of the death of Nazi “old fighters” with the death of Christ and an example of the Christian nationalism of the NSDAP. Image used by permission of Randall Bytwerk, German Propaganda Archive, Calvin College. https://research.calvin.edu/german-propaganda-archive/index.htm

Indeed, the contemporary relevance of the recent history of the relationship between Christianity and nationalism receives special attention at the top of this issue of CCHQ, in the form of a scholarly conversation between Robert P. Ericksen and Victoria J. Barnett. The two distinguished historians exchange views on a recent article by Ericksen, in which he draws parallels between Christian nationalist voters in 1930s Germany and twenty-first-century America.

Four reviews follow. Beth A. Griech-Polelle assesses Paul Hanebrink’s A Specter Haunting Europe: The Myth of Judeo-Bolshevism, which traces the source and course of the modern myth “of a worldwide Judeo-Bolshevik conspiracy out to destroy traditional Christian morality and age-old civilizations,” and attempts to understand “why it has been and remains so powerful.” Kevin P. Spicer reviews Karl-Joseph Hummel and Michael Kißener’s edited volume, Catholics and Third Reich: Controversies and Debates, a translation of an important German publication from 2009. Heath Spencer evaluates Anita Rasi May’s publication, Patriot Priests: French Catholic Clergy and National Identity in World War I, an “analysis of the responses of French priests to the outbreak of war, the variety of ways in which they participated, and their perceptions of the war’s meaning for France and the church.” Finally, Rebecca Carter-Chand reviews James Enns’ Saving Germany: North American Protestants and Christian Mission to West Germany, 1945-1974, in which the author “analyzes the role of North American Protestant ecumenical and mission agencies that participated in the reconstruction and spiritual rehabilitation of West Germany in the first three decades after World War II.”

Last, and certainly not least, we celebrate with editor Victoria J. Barnett in her retirement from over twenty years of important work at the United States Holocaust Memorial Museum. Robert P. Ericksen reports on a public panel discussion held in Barnett’s honour at the USHMM, and reflects on her many contributions at the museum and in the field of contemporary church history. Readers will be glad to hear (even as editors of the CCHQ are delighted to report) that retirement will offer more time for scholarly work, and we look forward to her future contributions in the field of Bonhoeffer studies.

We wish you a rewarding fall season and hope you find the contents of the latest issue of Contemporary Church History Quarterly both interesting and informative.

← “Understanding Twenty-first Century Christian Nationalism and Its Antecedents: A Scholarly Conversation”
Call for Applications: Confronting Difficult Issues around Religion and the Holocaust →