The retired chemist and theologian Joachim Krause just happened to come across the subject of the present book, as he writes at the outset. In referencing the well-known Institute for the Study and Elimination of Jewish Influence on German Church Life (Institut zur Erforschung und Beseitigung des jüdischen Einflusses auf das deutsche kirchliche Leben) he noted that the origins of the German Christian Church Movement (Kirchenbewegung Deutsche Christen) and their institute lay in the eastern Thuringian Wieratal, where Krause (born 1946) grew up. Since he knew nothing about the German-Christian history of the churches in his home country, he began to thoroughly investigate the German Christian Church Movement—by far the most radical and influential German-Christian organization during the period of National Socialism. 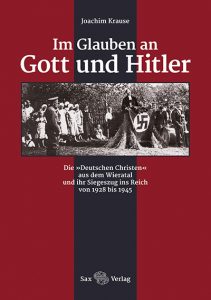 As the second subtitle reveals (“an annotated documentation”), the book is a descriptive representation of the German Christian Church Movement with a regional focus on the origins of the movement in the Wieratal near the city Altenburg. In his presentation, the author outlines the development chronologically: first of all, he describes how the two young vicars, Siegfried Leffler and Julius Leutheuser, who were inspired by National Socialism, began scouring for a small circle of like-minded people from 1927 onwards. Within a few years, this small circle was to become one of the most influential inner-church movements that controlled several Protestant churches during the time of the “Third Reich”. The theological worldview of the church movement was a symbiosis of (Protestant) Christianity and National Socialism, since they saw the direct action of God in Adolf Hitler and his movement.

The main lines of development which Krause describes, especially with respect to the sources that are quoted again and again, are not new. The early phase of the church movement is known at least in its rough historical outline through the publications of Susanne Böhm and Oliver Arnhold. This is where the uniqueness of Joachim Krause’s book comes to the fore: it is based on local sources such as the archives of the various parishes in which the German Christians began to build their national church movement. Furthermore, he can draw on personal records of inhabitants of the Wieratal from the time of National Socialism. With the help of this extraordinary material, Krause is able to retell the missionary successes of the church movement amongst the inhabitants of the Wieratal in a lively manner within the opening chapters.

In the subsequent chapters on the period of the “Third Reich”, however, Krause makes a number of content-related errors: this begins with false dates (p. 63) and leads to claims that in 1937 the NSDAP had forbidden dual membership in the party and church (p.82). To the contrary, Walter Grundmann, the scientific director of the aforementioned institute and one of the ideological leaders of the German Christian Church Movement, serves as a classic example of membership both in the NSDAP and the church organization, which was easily possibly until the end of the war.  Likewise, the secret newsletter of Martin Bormann in 1941 was not a challenge of the Nazi Party to the churches or even Christianity, but rather the attempt to achieve a consistent separation of party and church, as Armin Nolzen has impressively demonstrated.[1]

In the last chapter, Krause effectively criticizes the myth-making of an alleged ecclesiastical resistance after 1945 and points out how, on the local level, former German Christians are still fondly remembered, even today. In the chapter on the church policy of National Socialism, Krause does not maintain such a critical attitude, since he only repeats older interpretations of church historiography. By adding more recent work on the history of the churches in the “Third Reich”, such misjudgments probably could have been avoided. However, if you would like to find out more about the early years of the German Christian Church Movement, I recommend this book, which surprises with very interesting sources at various points.