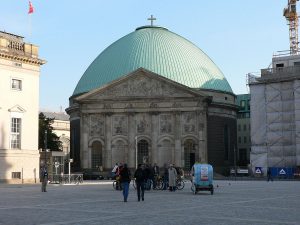 St. Hedwig’s Cathedral, Berlin, where Bernhard Lichtenberg was provost. Lichtenberg aided Catholics of Jewish descent during the Nazi era, and spoke out against the persecution of the Jews after the Kristallnacht Pogrom.
Source: Wikimedia Commons, CC BY 2.0, https://commons.wikimedia.org/w/index.php?curid=659751

Beth A. Griech-Polelle and Kyle Jantzen report on journal articles and book chapters about the Vatican’s efforts to combat communism in the 1930s and 1940s, about church politics in Thuringia during the Third Reich, and about Protestants, Catholics, and Christmas in Nazi Germany. (The authors of these works include CCHQ editors Heath Spencer, Christopher Probst, and Kevin Spicer.)

Finally, Griech-Polelle and Matthew Hockenos supply conference reports from the Powell-Heller Conference for Holocaust Education at Pacific Lutheran University and from the German Studies Association, informing us about papers which consider the role of Catholicism in the Holocaust and interactions between international Protestants during the Nazi period.

We hope you continue to find Contemporary Church History Quarterly a useful addition to your reading about the history of religion in Germany and Europe.