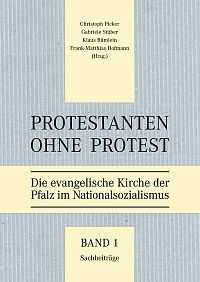 The Protestant Union Church of the Palatinate is one of the smaller regional churches in Germany, with its headquarters in Speyer on the west bank of the Middle Rhine. The church authorities, after lengthy delays, have now published this voluminous collection of essays by more than 60 contributors, which describes the fate of the church during the years of Nazi rule. It constitutes one of the best regional studies of the Protestant church for this period, although, as the chief editor Christoph Picker acknowledges in his introduction, the results are highly sobering. In this region of Germany which was diverse in its denominational loyalties, Protestantism and National Socialism went hand in hand. Many leading Nazi functionaries saw themselves as “good Protestants,” and the collaboration between the church leadership under the “German Christian” Bishop Ludwig Diehl and the Nazi Party’s regional hierarchy was at first close and on very good terms. Above all, the desire among churchmen for stability led them to endorse the Nazi project for “national unity” (Volksgemeinschaft) in the interests of harmony. So no real Church Struggle took place in the Palatinate Church, and it is estimated that  50 percent of the pastors belonged to the German Christian faction in 1933. The limited opposition from those who supported the Confessing Church when it was organized in 1934 was successfully integrated with the dominant German Christians. More than 20 percent of the pastors took out membership in the Nazi Party.
Four large chapters in Volume 1 spell out the details:

Chapter one describes the historical developments of this Church from the political and religious situation during the Weimar Republic up to the difficult and contentious coming-to-terms with its “brown” past during the immediate post-war years up to 1949. Chapter two (“Institutions, organizations, and groups”) includes the relationships with the national Reich Church under Bishop Ludwig Mueller as well as with the Nazi state. Details are also provided about the traditional church parties, the German Christian Movement and the local Confessing Church in the Palatinate. Chapter three covers the growth of antisemitism and the church’s reactions to the Nazi persecution of the Jews, as well as the results of the Nazi plans for ethnic cleansing through its euthanasia program in church institutions, and also the more general Nazi persecution measures against Protestants. Chapter four details internal church developments. This section describes such things as the character of church services, church art and architecture, youth work, the church press, the continuing and formative hostility towards the Catholics of this very mixed region, and finally the role of church women and especially of the pastors’ wives, who held prominent position in the parishes. All this is described in great detail in the 638 pages of the first volume. At the same time, a large number of impressive photographs are included, which are of considerable historical value.

The second and less extensive volume covers the activities of the major church protagonists, who were mainly pastors, with short biographical sketches. Given the multiplicity of these articles, it is naturally impossible  to examine individual items. Particularly notable, however, is Walter Rummel’s contribution on the performance of the church during the Second World War, which describes the extensive and willing participation of church members in Hitler’s campaigns. For example, the Dean of Speyer, Karl Wien, gave a rousing sermon on Heroes’ Remembrance Day in 1940, which, in flaming tones, exalted the list of German heroes from those who had fallen during the First World War to the “freedom fighters” in the postwar period up to the fighters in the SA and those who were actually now fighting in the ranks of the German army. After the German victory over France in June 1940, Bishop Diehl ordered all parishes to hold services of Thanksgiving. As long as these victories continued, there was a regular personality cult around Hitler, even in church pronouncements.

Roland Paul describes the church reactions to the Nazi pogroms against the Jews of November 1938, noting the widespread silence in church circles. Shortly afterwards, in his annual report, Pastor Georg Becker of Iggelheim wrote that, with these pogroms, the Nazis were actually carrying out Luther’s intentions and inheritance. “Those cities and sites where the Jews have blasphemed God and Jesus Christ will shortly disappear from the Reich of our dear leader Adolf Hitler” (357). Pastor Johannes Baehr in Mutterstadt was the exception. In November 1938, while teaching his class of schoolchildren, many of whom had witnessed the burning-down of the local synagogue, Pastor Baehr declared that such actions were not to be justified. On the very same day he was taken into “protective custody” and only released two days later after the intervention of Bishop Diehl.

This is a significant publication, providing a self-critical account of the church’s activities and attitudes. Of course, its appearance is very late. Only after several generations have passed by can we expect such a sobering and self-critical analysis of these twelve horrifying years of Nazi rule, which were also twelve fatal years for German Protestantism. So far not all regional Protestant churches have found the courage to undertake such a thorough and self-critical examination. So this example by a relatively small church shows what can be done on its own initiative. We can hope that these two volumes will find many readers, especially since 2017 is the 500th anniversary of the Reformation. Not only do these volumes provide us with examples of dangerous perversions to be avoided, but also remind us of the long and illustrious history which German Protestantism has enjoyed for the last 500 years.