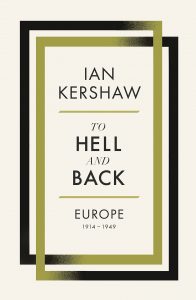 Despite its theologically-sounding title, this latest work by Ian Kershaw, who is one of Britain’s most distinguished contemporary historians, is a masterly synoptic history of Europe, designed for the general reader. In this work, Kershaw expands on his previous interest in Nazi Germany to cover what he calls Europe’s “era of self-destruction,” which places Nazi Germany in its wider context of a continent-wide series of disasters in the first half of the twentieth century. Nevertheless he also includes a short but valuable section on “Christian Churches, Challenge and Continuity”, placing emphasis on the political and social developments affecting the Christian churches within the wider European setting.

Kershaw begins this section by describing how, on the outbreak of the 1914 war, both sides indulged in claims of divine approval for their nationalistic goals. These mutually contradictory and incompatible assertions did little to enhance the morale of the combatants, and in the long run discredited both their advocates and the Christian gospel of peace and brotherly love. In the aftermath, paradoxically, the churches in Britain and France led the movement against militarism and were in favour of reconciliation through such agencies as the League of Nations. But in defeated Germany, the clergy were leaders in maintaining that they should have been victorious, that their nation had been stabbed in the back by disloyal elements, particularly Jews, and that they were being humiliated by the vindictive and oppressive Treaty of Versailles. Such reactionary attitudes did much to prepare the ground for Hitler’s rise to power.

As Kershaw argues, in 1933 one wing of German Protestantism sought to bring the church up to date by jumping on the Nazi bandwagon. But this evoked a backlash from the more conservative wing known as the Confessing Church, which opposed any state interference in church affairs. However, many of these pastors had sympathy with Nazism’s political and military aims. For their part, the German Catholics invoked the aid of the Vatican in 1933, seeking a treaty or Concordat to secure their position in the new Third Reich. But, as Kershaw points out, this Concordat from the beginning was a dead letter, due to the Nazis’ dynamic ideological and nationalistic plans and the anticlerical attitudes of the party leadership. In practice, in both churches, despite attempts to oppose Nazi encroachments, there was general compliance with other spheres of government policy, including the Nazi persecution of the Jews.

The author goes on to explain that similar attitudes prevailed in other countries, such as the Nazi satellite state of Slovakia, where the president happened to be a Catholic priest. Criticisms from the pope were ignored, so that a leading Vatican official could comment in 1942: “Everyone knows that the Holy See cannot bring Hitler to heel. But who will understand that we cannot even control a priest?” In other parts of Europe, the fate of the Jews was largely greeted by churchmen with indifference. Arguments have continued ever since whether more forceful condemnations of Nazi atrocities by the churches would have saved lives, or have led to making the situation in Germany and the occupied territories even worse. In Kershaw’s view the silence of Pope Pius XII on this issue irredeemably harmed his reputation. After the Nazi regime was overthrown, little was done to regret the churches’ support for totalitarian rule or to extend sympathy to its victims. In 1945 only a few voices, such as that of Pastor Niemõller, were found to support a declaration of guilt, while too many churchmen had to come to terms with their previous support of Nazi goals.

In Kershaw’s opinion, apart from the regions that fell under Soviet domination in 1945, the wartime experiences of the churches in Europe did little to impair their standing. Soon afterwards they took energetic steps to reorganize and revitalize themselves. Significant changes would only come about in the 1960s. In his conclusion, Kershaw reverts to his theological interests by asking both about the churches’ responses to the disastrous atrocities of this half-century and about a God who could allow such evils to prevail. In his view such vital questions would only grow, not diminish, as the Second World War receded further into history.

← Conference Report: “Not Without the Old Testament”: The Importance of the Hebrew Bible for Christianity and Judaism, French Church of Friedrichstadt, Berlin, 8-10 December 2015
Article Note: Thomas Brodie, “The German Catholic Diaspora in the Second World War” →