Very few German scholars have recently published works on England, and fewer still on the Church of England. It is therefore a welcome sign that Peter Itzen has now contributed this well-researched and balanced study of the Church England in the second half of the last century, which will undoubtedly be of value to German students and theologians, many of whom usually look with both puzzlement and envy at the church scene across the English Channel. 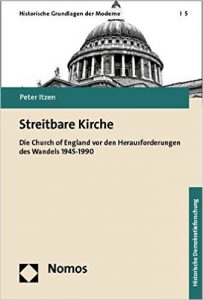 This account pays little attention to theology, but instead follows in the footsteps of such authors as Grace Davie and Callum Brown in emphasizing the sociological patterns he discerns in the Church of England’s development during the fifty years following the Second World War. Itzen lays particular stress on the views and the impact of the major church leaders on the political and social life of the nation, and makes extensive use of the archives held in Lambeth Palace, the residence of successive Archbishops of Canterbury. He also appends short but useful biographical details of many church leaders. The result is a well-informed but not uncritical account of the sometimes controversial stances adopted by the church, and the often critical responses by politicians, for instance during the Suez Crisis in the 1950s, or during Margaret Thatcher’s term as Prime Minister in the 1980s.

Itzen acknowledges that public support for the Church of England, in terms of participating in its regular weekly worship services, has suffered a marked decline during these years, when compared to the situation of a hundred years ago. Nevertheless, the Church of England, like the monarchy, still remains as a symbol of tradition and continuity. As with the monarchy, there is virtually no support for its abolition or disestablishment. The Church of England has a presence in virtually every village across the realm, although the pattern of religious observances has changed greatly with the recent influx of immigrants from distant lands and other faiths. But in contrast to the countries of continental Europe, England in modern times has never been invaded, nor suffered from being occupied by enemy troops. England’s last political convulsion was four hundred years ago, and its last religious convulsion took place in the sixteenth century. This has given the Church of England a stability and an institutional advantage of inestimable benefit for its political witness. On the other hand, as Itzen repeatedly points out, the situation has changed. The Church of England is no longer “the Tory Party at prayer”, or an automatic supporter of Conservative governments, as some politicians would like it to be. The advance of secularism has meant that the Church of England no longer commands the allegiance of a large proportion of the population, and is not listened to as readily as before when advocating moral guidance on political or social issues. But the fact that its senior bishops have always been, and are still, members of parliament’s upper chamber, the House of Lords, and frequently avail themselves of this opportunity to convey the opinion of church members, presents a very different picture from other countries. They owe their position to the centuries-old process of English history, rather than to any transient political poll. Hence they enjoy the ability to speak for the whole of society, and see themselves as the guardians of their respective diocese’s welfare. To be sure, these church leaders are aware that they can no longer command unquestioning support, or dictate standards of Christian morality to an increasingly skeptical public. Nevertheless their energetic stand against the unbridled individualism of the Thatcher years, gained respect for its vigorous defence of the need for social cohesion, and support for the poorest and weakest in society’s ranks, the so-called “bias for the poor”. This process was also helped by the professionalization of the Church of England’s administrative structures which provided its spokesmen in the House of Lords with more expert political guidance. So too the establishment of such organs as the General Synod and the Board of Social Responsibility provided help in the propagation of responsible church pronouncements. In the many critical debates and conflicts of these years, the Church of England was able to play a moderating role, so that the interventions of the church leaders served to enhance its position as a link between competing political factions.

In more recent years, such as the 1990s, the most pressing issue for the Church of England was the question of the ordination of women. Fortunately, the new Archbishop, George Carey, as an Evangelical, was open to compromises which offered the more stringent Anglo-Catholics an olive branch of friendship. And in any case, the more militant supporters of women’s rights were satisfied with the eventual agreement of the church assemblies, though it took another ten years for women’s ordination to the episcopate to be realized. Far more contentious was the issue of homosexuality, which then spilled over into the term of office of the following Archbishop, Rowan Williams. Williams himself was an advocate of a liberal and tolerant stance for the Church of England on this question. But as Archbishop of Canterbury he was also the leader of the world-wide Anglican Communion. He faced intransigent opposition to any such toleration from the majority of African bishops. He thus found himself in an insoluble impasse which threatened to break open the ranks of the Communion, and make impossible the show of Anglican unity as previously displayed at the decennial Lambeth Conferences. This situation remains unresolved. No less problematical remains the issue of Britain’s multi-cultural and multi-religious identity. But the readiness of the Church’s leaders to issue constructive appeals for national and social harmony indicates a willingness to bring the influence of this heritage to bear, and to mobilize its supporters to proclaim its ethical and historical relevance to the problems of the 21st century

Itzen’s conclusion is therefore a positive one for the future of the Church of England’s political and social witness. He takes issue with the teleological views of such secularists as Richard Dawkins, who sees all religious activities as survivals of bygone superstition, or the modernists, who regard the Church of England as an outdated institution which is due shortly to fade away. Instead he believes that, despite all the manifold difficulties of its political and social engagement, the Church will continue to play an unrivalled and positive, though not undisputed, role in the nation’s life as the spiritual advisor to successive political regimes.

← Review of Lucian N. Leustean, The Ecumenical Movement & the Making of the European Community
Review of Mary M. Solberg, ed. and trans., A Church Undone: Documents from the German Christian Faith Movement, 1932-1940 →