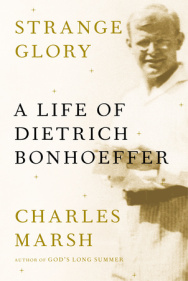 A closer look at the original sources cited in Professor Marsh’s book Strange Glory: A Life of Dietrich Bonhoeffer has led me to write this clarification. In my review (September 2014) I commented on “a previously unpublished letter that, in the passage that is quoted, is quite striking” with respect to Marsh’s claim that there was a homoerotic relationship between Bonhoeffer and Bethge. The letter can be found on page 252 of the book; Marsh apparently found the original in the Bethge papers, although he gives no archival citation in the footnote (65). This is incidentally the only place in the entire book where a supposedly newly discovered document is cited in the notes.

Because the passage quoted was so unusual I didn’t immediately recognize it, but as it turns out, it’s from the letter published as nr. 102 in Bonhoeffer Works Volume 14, and the text of the letter differs significantly from the translation offered by Marsh. In his book, Marsh actually quotes a phrase from this letter (which he misdates) two paragraphs before: “I miss you often.” In the passage from the supposedly unpublished letter, Marsh renders the text as follows: “The heart is more deceitful than anything else, and is desperately sick….The semester is coming to an end, and I miss you often.”

The full passage as quoted on page 225 of volume 14 of the Bonhoeffer Works reads as follows:

There is a lot of confusion here at the end of the semester, and I miss you often. I always greatly look forward to your letters! And the unrest in church politics on top of it all. ‘The heart is a defiant and despondent thing.’ (Jer. 17:9) Defiance and despondency – all that just dies in prayer. Let us remain faithful and in the process also remain true to each other.

“The heart is a defiant and despondent thing” is actually a quotation from Jeremiah and Bonhoeffer is commenting on the unrest in church politics.

In other words, the translation is a very misleading version of the original text. Taken as an isolated example this might be overlooked, but unfortunately there are examples throughout the book of mistranslation and misinterpreted (or misunderstood) information, particularly with respect to Marsh’s portrayal of the Bethge-Bonhoeffer relationship. Facts are given without the larger context that gives a more accurate picture. It is not news, for example, that Bonhoeffer and Bethge had a joint bank account; Bethge essentially managed Finkenwalde as well as the underground pastorates in Bonhoeffer’s absence and had to pay bills (and there was always uncertainty as to whether Bonhoeffer might be arrested, which made a joint account a necessity).

In Marsh’s telling the entire section devoted to Bonhoeffer’s brief 1939 stay in New York emphasizes his longing for his friend Bethge, but it must be said there is really no indication of that in either his 1939 New York diary and the letters he wrote during that period, which I translated and edited for Bonhoeffer Works volume 15.  What emerges from the actual texts is that Bonhoeffer’s sense of homesickness and remorse at having left Germany was shaped first and foremost by a deep connection and sense of responsibility for his students. He felt that he had left them in the lurch, and his letters to Bethge focused on these concerns.

Here again, the translations in the Marsh book are misleading. Throughout his 1939 diary (and even in some letters to Bethge) Bonhoeffer uses the second-person plural, which makes clear that he’s addressing the entire Finkenwalde community. In Marsh’s account these passages have been turned into the first-person singular and rendered incorrectly as personal notes to Bethge. For example, the quotation on page 280, “someday we will worship together in eternity” (which is not footnoted in Marsh) is from the June 11, 1939, entry in Bonhoeffer’s diary. The larger paragraph in which this passage occurs makes it abundantly clear that the “we” is the community (see the entire text on page 218-19 of Bonhoeffer Works, volume 15). Similarly, in the June 4 letter to Bethge in which Bonhoeffer writes “You will be tired and gone to bed now…” (Marsh, page 277) the “you” is plural and addresses the Finkenwalde community as a whole.

There are similar instances throughout the book of incorrect citations or historical errors that, while they make for a dramatic story, don’t reflect the actual record. For example, in his review of the book in Sojourners (http://sojo.net/blogs/2014/08/26/harlems-influence-bonhoeffer-underestimated-strange-glory), Reggie Williams noted the odd claim that Bonhoeffer broke ties with Abyssinian Baptist church in 1931 because the church was charging people admission to Easter Sunday services (Marsh, pp. 127-128). The source given is a letter Bonhoeffer wrote to his grandmother, but that letter says nothing about an admission charge or even Abyssinian; it’s only a mention of the common practice of major metropolitan U.S. churches to regulate the large Christmas and Easter crowds by issuing passes. Given the centrality of the Abyssinian experience for Bonhoeffer’s theology, a break with that church would be a dramatic development and worthy of further examination—yet there is no evidence of such a break. Indeed, as Clifford Green noted in his introduction to Bonhoeffer Works volume 10, there is some evidence that Bonhoeffer actually spoke at Abyssinian in 1939.

My review essay was titled “Interpreting Bonhoeffer.”  As I stressed in that review, the books I was reviewing are all interpretations and attempts to carve out new ground. There is certainly room for that in Bonhoeffer scholarship. There is also room for new interpretations of seminal events and relationships in Bonhoeffer’s life and for new theological interpretations of what he tried to do. But historians will know that interpretation of any kind must be grounded in fact and scrupulous attention to detail and correctness. Interpretation in history and biography (which, as the history of a life, deserves the same kind of faithfulness to accuracy) is only as sound as the accuracy of the account itself.

← Review Article: The Vatican and the United States during the Interwar Era
A Crusade, a Holy War: Protestant Preaching in War-time, 1914. →