Like most overviews of Nazi Germany, this new anthology, published in the Wiley Blackwell Companions to World History series, includes a chapter on “religion.” The hefty 600+ page volume contains 37 chapters on a wide range of thematic topics, providing an accessible snapshot of the latest historiography on Nazi Germany and its legacy. Along with addressing enduring questions about the rise of Nazism and the nature of Nazi rule, the volume includes some intriguing chapters on the spatial turn, the history of emotions, and the study of information policies. 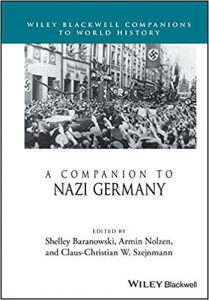 In just 13 pages Manfred Gailus gives an overview of the Christian churches and religious identity and practice in Germany during the 12 years of Nazi rule. Rather than placing the Kirchenkampf and an assessment of the Catholic hierarchy at the centre of this narrative, Gailus paints a picture in which several diverse religious groups quarreled and competed with each and with the state. In addition to the Deutsche Christen, the Confessing Church, and the Catholic Church, he discusses the Free Churches, other small independent religious communities (Adventists, Quakers, Jehovah’s Witnesses, etc.), and völkisch ‘new pagan’ groups (including the German Faith Movement and the Ludendorff movement). These völkisch-religious groups, whose proponents were called “German Believers,” need to be differentiated from the similarly-named “Believers in God” (a new label for those ardent Nazis who had left the church).

Gailus’ summation reveals the consensus among historians on a number of important issues that have long dominated the historiography, such as the complicity of “considerable parts of the Protestant churches” in the persecution of the Jews (337) and the importance of gender and class in understanding the German Christians and the Confessing Church. He affirms the usefulness of the concept of political religion to understand Nazism, but admits the issue will continue to be debated. Finally, he points to a few topics that are still under-researched, namely the independent smaller churches and the changes that took place during the war years.

The references, bibliography, and suggested reading list point to the most relevant scholarship in German and English.