I am pleased to introduce you to our latest collection of reviews and informative notes relating to the history of German and European religious history in late-modern history. As we launch the 25th volume of Contemporary Church History Quarterly, the journal remains an important forum for the dissemination of information and commentary on this important history. The issues and events our editors and guest contributors write about remain relevant in our current age of turmoil over identity, exclusion, and the role of religion in politics and society. 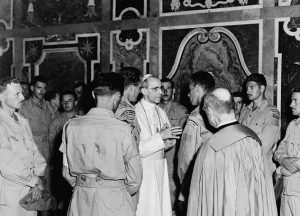 This March 2019 issue of CCHQ has taken longer to produce because of various academic conferences and other commitments of the editors. The delay does give us the opportunity, however, of recognizing the important announcement of March 2, by which Pope Francis declared that the Vatican Secret Archives pertaining to the pontificate of Pope Pius XII would open to researchers beginning on March 2, 2020. According to Francis, Pius XII guided the Roman Catholic Church “in one of the saddest and darkest moments of the twentieth century.” He added: “The Church is not afraid of history. On the contrary, she loves it, and desires to love it more and better, as God loves it.”

News agencies, editorialists, church leaders, scholars, and institutions around the world quickly responded to the Pope’s announcement. As United States Holocaust Memorial Museum Director Sara J. Bloomfield put it, “Since the end of World War II, scholars, Holocaust survivors, and others have asked important questions about the role of the Vatican and Pope Pius XII during the Holocaust…. It is long overdue for speculation to be replaced by rigorous scholarship, which is only possible once scholars have full access to all of these records.”

It will no doubt be some years before we learn whether or not access to a fuller archival record of Pius’ pontificate resolves the deeply divided views about his response (or non-response) to the Holocaust.

In the meantime, we have a variety of new book reviews, article notes, and other news for you. Leading off is Robert P. Ericksen’s review of Matthew Hockenos’s important new biography of one of the most important figures in the “German Church Struggle” and postwar German Protestantism, Pastor Martin Niemöller. Other reviews move forward and backward in time: Andrew Chandler assesses Roger Newell’s investigation of and reflection on the role of Protestants in Leipzig’s Nikolaikirche in the 1989 Revolution, while Kevin Spicer considers Jeffrey T. Zalar’s study of Roman Catholic lay reading habits in nineteenth-century Germany and Kyle Jantzen reviews Beth A. Griech-Polelle’s new introductory textbook on antisemitism and the Holocaust.

Other contributions touch on a variety of topics. Victoria J. Barnett considers two articles on twentieth-centuries challenges to the notion of “Christian civilization” in Europe, then tackles another on the role of nationalism in the thinking of Protestant theologians Paul Althaus and Dietrich Bonhoeffer. Beth A. Griech-Polelle unpacks Thomas Brodie’s recent article on German Catholics in the Second World War. Alongside these article notes, we offer a translated excerpt from Manfred Gailus’s new book on the outspoken Reformed theologian Helmut Hesse, who died in Dachau in 1943 on account of his opposition to Jewish persecution. Finally, Rebecca Carter-Chand reports on the recent 49th Annual Scholars’ Conference on the Holocaust and the Churches, held in early March at the Ackerman Center for Holocaust Studies at the University of Texas at Dallas.

We wish you the best as you read this latest issue of Contemporary Church History Quarterly, and look forward to bringing you more articles, reviews, and notes in June.

← Review of Matthew D. Hockenos, Then They Came for Me: Martin Niemöller, the Pastor who Defied the Nazis
Article Note: David A.R. Clark, “Antisemitism, Violence, and Invective against the Old Testament: Reinhold Krause’s Sportpalast Speech, 1933” →